How Venture Out is Bringing the LGBTQA+ Tech Community Together

Every year in June, millions of people celebrate Pride Month by proudly waving rainbow flags, attending parades and marches, and recognizing the contributions and struggles of people in the LGBTQA+ community.

But for Venture Out, a network of community organizations, companies and individuals striving to foster more diversity and inclusivity in the tech sector, giving back and celebrating community successes goes beyond one month each year.

The initiative launched in 2017. Since then, the team behind it — including 2019 co-chairs Lisa Durnford and Simon Mills — have been creating opportunities for networking, job hunting, and career growth through events by the community, for the community.

“There’s a lot of discussion around how much work we still have to do in terms of diversity and inclusion in the tech sector,” said Durnford. “The founders of Venture Out were realizing when they went to tech networking events or conferences, it was hard to find other folks in the LGBTQA+ community… but then, at the same time, when they went to Pride events or other events for the community, it often wasn’t very tech-focused.”

Venture Out, she says, was launched to fill that gap.

The initiative’s mission, according to Mills, is to “connect the LGBTQA+ tech community to opportunities, role models, mentors, and each other.”

With that in mind, she says it’s crucial to build spaces where people who often face challenges in being themselves professionally are able to feel like they can have genuine conversations.

Throughout the year, the team of volunteers puts together conferences, networking opportunities, and connects early-career professionals to new opportunities in the technology and entrepreneurship fields.

Another key piece is an annual spring conference in Toronto — the first and largest of its kind in Canada — which Durnford says brought out around 650 people and 40 companies and community partners this year for talks, workshops, networking, and a career fair. 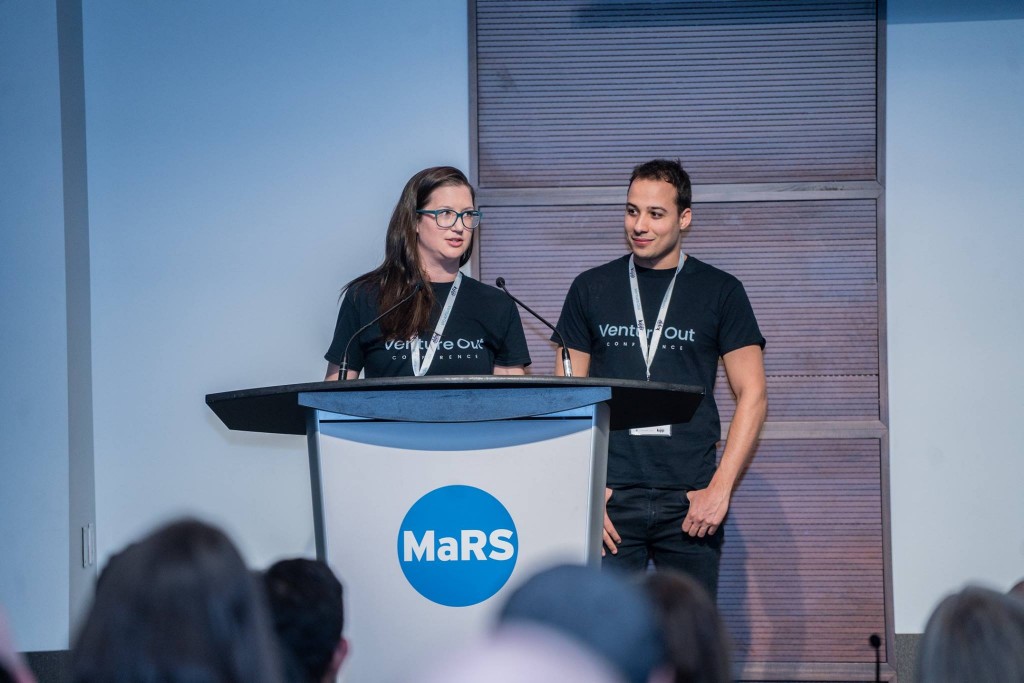 Making all the components happen is a constant challenge, particularly since the volunteer team is made up of a mix of students and people with full-time day jobs, Durnford notes.

But she says the work it’s totally worth it.

On one side of things, Durnford says Venture Out has proven companies are capable of having conversations about being better workplaces for LGBTQA+ employees — unlike a lot of conferences and events where companies are just talking about themselves.

On the other side, the workers are gaining new insight and employment connections.

The initiative offers a platform for LGBTQA+ entrepreneurs and leaders within the tech community to tell their stories — and model the way for those who want to be in those positions in the future — he adds.

When asked why the work matters, both co-chairs say it’s about the people.

“It’s always amazing to hear stories of folks who have found a job through our events or have been able to use our events as a way to kick start conversations about diversity and inclusion within their organizations,” says Mills.

And for a lot of people, she adds, it feels like “finally finding a space” designed with them in mind.

“We’ve heard from a lot of people that it was a big deal to finally feel comfortable at a tech conference,” Durnford says.

We spoke with Bellemare about the Yohomo community and how his success in UX and product design helped him build a career and passion project.

Tech Events to Look Out for This Pride Month

You won't want to miss these LGBTQI2S+ tech and business events in Toronto and New York.

The Top 10 North American Tech Conferences to Attend in 2019

Whether you're looking for networking opportunities or the chance to explore the latest ideas and issues, the right tech conference can make all the difference.