My perspective and understanding of how things work are changing. I came back to work after my maternity leave at the end of 2014 to realize there had been a clear acceleration of the digital trend. In 2015 my workplace was restructured to evolve with the digital age, bringing about changes that were sudden, exciting and at times bewildering.

There was an opportunity when BrainStation donated digital skill development to the charity that I work for. Suddenly a big light went off for me. This was a skill that I needed – that everyone needs. As a “digital immigrant” at the ripe old age of 33, my bohemian tendencies had in many ways rejected technology. But there was no denying that the world is changing, and my curiosity won out over resistance. I decided to give it my all and buckle up for the ride. 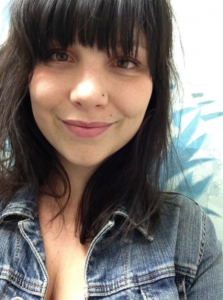 Jen is taking Intro to Web Development at BrainStation in Toronto!

I happened to be binge-watching Dr. Who at the time, so technology really appeared a fantastical world. I was entranced with robots and visions of a technological future. I ate Phillip K. Dick stories for breakfast. I began cleaning up my decade-old (ancient!) laptop to prep it to handle its incoming duties and downloads, and in the process, it became a living being. I know that sounds unbelievably geeky, but it’s true. I was learning to communicate with it, take care of it, and open my mind to the possibilities of what it could become (in the end, it betrayed me – finally conking out in our last week of class).

Our teacher noted on the very first day that web developers have a reputation for Googling how to do their jobs all day – which has some truth to it, but is not as easy as it seems. You must understand and evaluate the plentitude of web resources and there are many ways to accomplish the same task. I learned techniques for clean, transparent code that opened the all-important door to collaboration. Getting familiar with things like file structure, terminology, and debugging processes laid a solid foundation – but the number of rules and the linearity of code was pretty foreign to my abstract brain. But as with any language, if you focus and practice, eventually it starts to make sense. Those moments when I realized that I was understanding the language, and each subsequent moment where I figured out the solution to a problem felt so damn good.

In essence, learning to code exercised my left-brain and I reaped the benefits far beyond the course goals. I became more organized and analytical. My memory improved. And I had a new appreciation for modes of thinking that I hadn’t personally valued so much before. I love an opportunity to stretch the way I think, and this course certainly did the trick.

My shifting perspective brought with it some resistance. As I delved into this new world, AI takeover became a growing concern. I was horrified by a study that “four out of five 18 to 30- year-olds confessed to an inability to navigate without electronic guidance”. And I am perplexed by my two-year-old’s innate ability to unlock my iPhone and create virtual pets on her LeapFrog.

As I get better at navigating the online world, I also take opportunities to navigate new neighborhoods in my own city. As I learn to talk to my computer (RIP), I am also focusing on improving my human communication skills. I look at generational differences in how people and businesses interact with each other with great fascination.

Now I binge-watch Lie to Me (a show about a deception expert who studies facial expressions and body language) while I investigate UX/UI Design Principles. It’s all about balance.

We're excited to announce that CourseCompare, the top marketplace for digital education, has named BrainStation the Best Coding Bootcamp for 2022.