The Best States to Start a Business

We’ve talked about how New York may be poised to surpass Silicon Valley and how Boston is experiencing a boom in the biotech industry, but we wanted to take a closer look at the growth of job markets on a state level. Are there larger regional trends that can help us pinpoint where the greatest career opportunities may exist?

To find out, we looked at data from the U.S. Bureau of Labor Statistics and tracked the net amount of new businesses opened in every state over the last ten years. What we found was both expected and surprising in equal measures.

Here are the states that saw the largest net amount of new businesses in the last ten years.

Here is how the overall map looked: 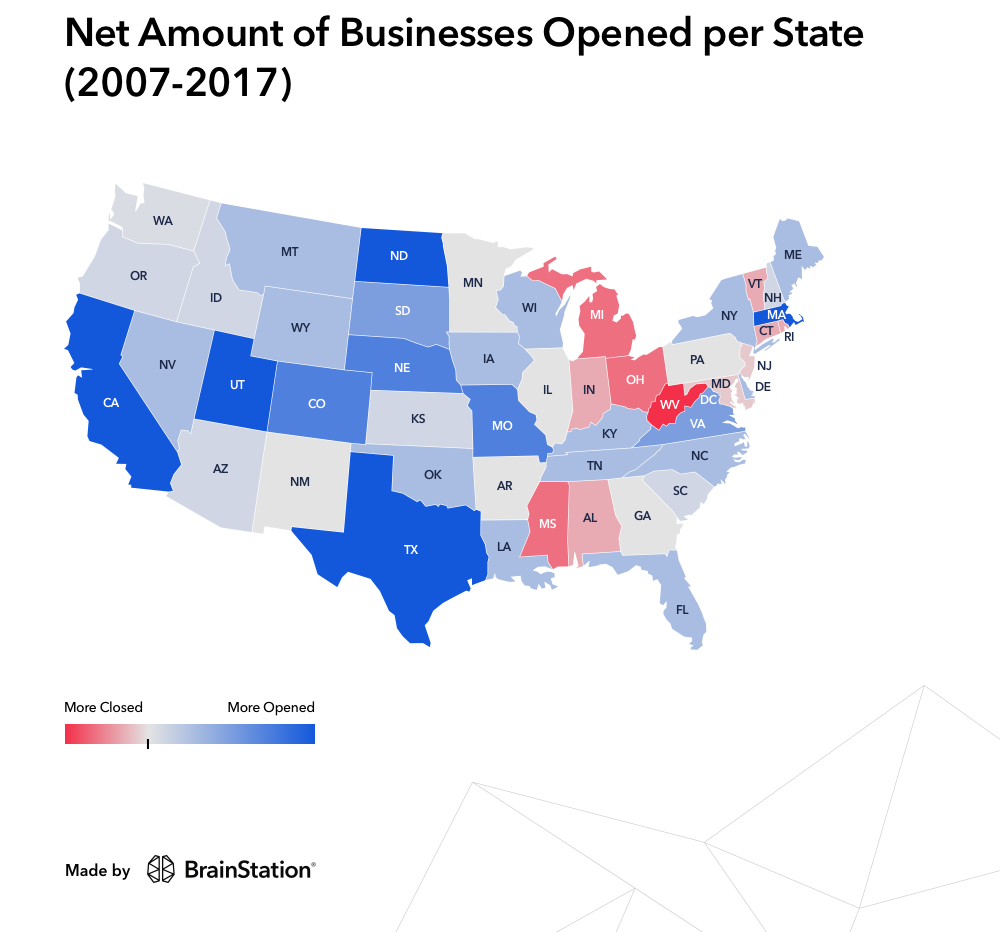 Let’s take a look at some of the more surprising states to make the list, starting with:

The Growth of the Utah Job Sector

Perhaps most surprising about our findings were Utah and North Dakota ending up on the top five list. We’ll get to North Dakota later, but first, let’s take a look at what could be leading to Utah’s sudden entrepreneurial boom.

In short, Utah is on fire, relatively speaking. According to a report from Wells Fargo, the state’s economy is among the fastest-growing in the nation, which may be encouraging would-be entrepreneurs and investors alike.

“It’s doing well for all the reasons you’d want to see an economy do well — mainly a fast-growing labor force [that] is very well-educated and young,” said Wells Fargo Economist Charlie Dougherty, adding that the economy is also among the most diverse in the nation.

Wells Fargo’s report points to the development of new sectors like cloud computing, big data, and software development, as well as the growth of aerospace and life sciences as reasons for the state’s positive economic outlook. The numbers back this up. The growth in the number of tech jobs in the state has grown 4.9 percent over the last 10 years, which is more than triple the tech job growth rate of the United States as a whole.

Overall, Utah enjoyed the nation’s fastest job growth over the past 12 months, but according to federal data, it was actually the construction industry that led the way, expanding by 6.2 percent.

Massachusetts’ appearance on the top five list makes sense given the growth of the region’s biotech sector. The Boston area alone has more than 1,100 biotech and biopharma companies, academic centers, and life-science organizations, making it a world leader in this area. In fact, on FierceBiotech’s Fierce 15 list of the world’s most promising biotech companies, six of the 15 companies highlighted were based in the Boston area:

Jobs in the biotech industry grew by 28 percent from 2008 to 2017, and by 4.3 percent in that final year alone. There are now more than 70,000 people employed in the industry in the state, averaging an annual wage of $149,731. If you’re doing the math, that means the Massachusetts biotech workforce is bringing home just over $10.4 billion.

In addition, venture investment in the state’s biopharma companies was $3.1 billion in 2017. This is a staggering number when you consider that these Massachusets companies received 37 percent of all biopharma VC dollars invested in the US that year. And while significant investment in the field comes from outside the state, there are well-established, local venture capital firms that specialize in the sector. F-Prime Capital, for example, was among the first VC companies to focus on biopharmaceuticals, medtech, and healthcare IT services.

Boston’s, and Massachusetts’, growth as a worldwide biotech hub has actually created a talent shortage, especially when it comes to tech-related jobs. The State of the Tech Economy report found that nearly 10,000 new tech jobs were added in Massachusetts in the previous year. A follow-up report, the Massachusetts Tech Pulse Index, meanwhile, found that 70 percent of tech employers expected to increase employment over the following six month

“I’ve had a long career in human resources and watched a lot of (hiring) cycles,” Russ Campanello, Executive Vice President of Human Resources at iRobot, told the Boston Globe, “and this is as intense as any of them.”

North Dakota may be another unexpected name on the top five list, but it’s not that surprising when you take a closer look. For one thing, North Dakota is riding an unprecedented oil boom. In fact, the U.S. is now producing more crude oil than any other country, and the state is playing a large role in that. Overall, North Dakota is the number two oil state in the US (behind Texas) and is now setting production records.

The increase in oil production has had a clear impact on communities (and business creation) across the state. NPR recently focused on Watford City, which has seen its population more than tripled in the past decade, from 1,790 to 6,523.

“Our town is booming, our main street is full. You don’t go through little towns and see every storefront have a business in it. We do,” one resident told NPR.

According to the U.S. Bureau of Labor Statistics, the unemployment rate in North Dakota is now at 2.6 percent, which is lower than the national average. The state’s population is also rising. In fact, of the 3,142 counties in America, there is only one that has grown by over 50 percent in the last eight years, and that county is Williams County, North Dakota, which grew 57.8 percent.

These were the ND companies that made the list, along with their industry and growth rates:

If there’s anything this list makes clear, it’s that the state’s economy is diversifying, with software and tech playing a much more prominent role, all of which bodes well for the future.

Stay tuned over the next few weeks as we take a closer look at each of the states listed here, particularly with regard to the growth of tech jobs.

Founder of Rally, Matthew Mayers, shares how his BrainStation experience bolstered his design-first entrepreneurial spirit and boosted his career in tech.