If TED Talks existed sixty years ago, industrial designer Henry Dreyfuss might have been racking up YouTube views and leading the user-centered design revolution.

Although it wasn’t until the early 90s when the term “user experience” was coined, in his 1955 book Designing for the People, Dreyfuss wrote, “If the point of contact between the product and people becomes a point of friction, then the designer has failed. On the other hand if people are made safer, more comfortable, more eager to purchase…then the designer has succeeded.”

Dreyfuss’ words can be used to describe the booming field of user experience design today, along with many of the ideas and design principles he wrote about.

Here’s how today’s UX designers can follow Dreyfuss’ timeless tips about how to create products that are all about the user.

BrainStation’s User Experience Diploma Program is a full-time, 12-week program that equips professionals with the skills and experience to start a new career in design.

In the 1930s Bell hosted a competition to redesign their telephone, but wasn’t planning on giving contestants access to clients (the users) or engineers. Dreyfuss was interested but refused to participate unless he could do what we would now call user research so that he could design the telephone “from the inside out.”

Bell eventually agreed and Dreyfuss was able to visit customer’s homes on repair calls. The result was the Dreyfuss Model 302, a design success that had staying power for 30 years and is still recognizable and even recreated today. 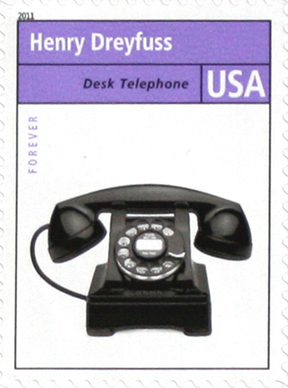 Dreyfuss knew he couldn’t do his job without access to the end user, product engineers, and customer service support staff. Dreyfuss didn’t cut corners when it comes to the research and design process, and as a result established a reputation as a designer who could boost profits for businesses, which was a new idea at the time.

UX designers can follow Dreyfuss’ lead by setting setting clear expectations around time and resources needed for user research before beginning a project. If the client isn’t on the same page, go back to square one and explain the importance of user research, or move onto the next project.

When Dreyfuss worked on an airplane interior design project, he assigned staff to ride a jet and take notes about what they observed. Researchers found that passengers in an unfamiliar environment (air travel was relatively new at the time) made some interesting assumptions, like putting mail into air conditioner slots or reports from flight attendance that “babies are sometimes tucked into the overhead rack.”

Hopefully you haven’t witnessed anything similar, but most people who’ve been on an airplane have fumbled with a bathroom door handle or overhead light. The lesson here, according to Dreyfuss, is that design should be obvious at the expense of originality.

When ‘When’ Overrides ‘Why’

Whenever Dreyfuss had downtime while travelling, he walked through local department stores to get a feel for who was buying what and why.

What he found was that the “why” often doesn’t make sense and that “when is a key word” when understanding what the user wants. For example, Dreyfuss wrote about a customer who was buying a clock. Dreyfuss watched the customer weigh two clocks and decide to go with the heavier model because, at the time, weight was a sign of quality (the lighter clock was designed to be lighter).

In another example, Dreyfuss writes about the 1936 Chrysler Airflow, which was revolutionary at the time because of its aerodynamic design and improved handling. Although it was a better car, the project failed — no one wanted the car because it was “so far ahead of the public that it was out of sight.” After the failure of the Airflow, car manufacturers disguised good design with wings, disks and shiny bands that customers were used to.

Faster, newer or lighter isn’t always what the user wants when it comes time to make a purchase.

The lesson here is to take into account the emotional elements of design and shopping when doing and analyzing user experience research. A user’s habits and social expectations play a big role in determining what they want out of a product, sometimes at the expense of technically good design.

Interested in learning more about UX? Check out what skills a UX Designer needs and find more out more about BrainStation’s UX Design courses.

Founder of Rally, Matthew Mayers, shares how his BrainStation experience bolstered his design-first entrepreneurial spirit and boosted his career in tech.

Read a recap of the IBM Design Sprint with insights from the winning team about UX Design and BrainStation's bootcamp experience.