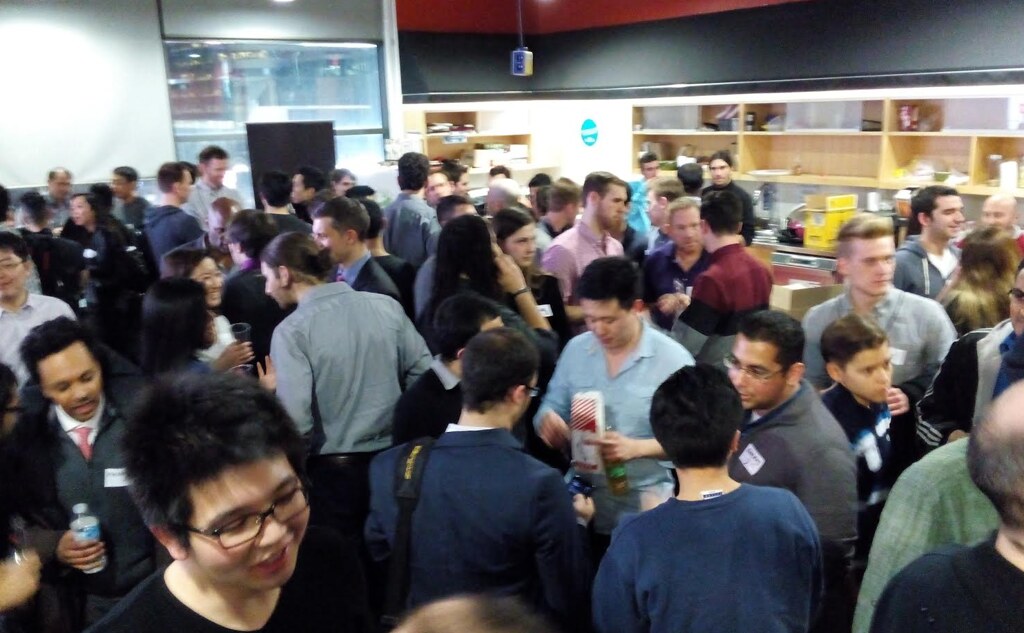 The mood at Ryerson University’s Digital Media Zone was casual and jovial for HackerNest’s Tech Social for March, as at least 300 people were willing to be a little cramped in the space as they met with fellow techies from varying breadths of experience.

What makes HackerNest’s Tech Socials unique is the fact that they frown upon the traditional pitching and networking common at most tech events – their Meetup page for March explicitly states that there should be “no sales pitch, yo” – in order to encourage people to actually connect on a personal level. Although this might sound unusual, their deliberate decision to keep Tech Socials unpretentious is clearly working: HackerNest’s Tech Socials are the biggest tech meetups in Canada, and they’ve got 6,000 members in Toronto.

“Our Tech Socials are one of the very few events that are actually dedicated to building the city’s tech community,” says Shaharris Beh, the founder of HackerNest. “Tech Socials are fundamentally bipartisan with no agenda. We aren’t sneakily trying to hire you, there’s no thinly-veiled sales pitch to get you on our API and we do not commercially gain from your attendance.”

Since HackerNest first started in 2011, other splinter cells of the organization have sprouted in 20 different cities across the globe, from Dallas, Texas to Bogota, Colombia. “The idea that this is agenda-free makes you not treat every interaction as a transaction,” says JJ Beh, one of the co-founders of HackerNest. “If you were a developer and your name tag says that you’re a developer, then if I don’t need a developer I’ll skip you over. So we try not to stratify people by their ‘techiness.'”

This laid-back approach to their events was intentional from the start.

“The atmosphere we’ve cultivated at HackerNest sounds almost juvenile and lackadaisical, but the idea is that our growth and success are anything but accidental,” Shaharris says. “The DNA of our events has always been centred around ease of replication; this is why we were able to pop open 20 new splinter cells in 20 months without imploding, and we did it without funding.”

That’s not to say that valuable connections aren’t made. Past Techsocials have seen cofounders and teams connecting by chance, including cofounders Jordan Turner and Devin Tu of MapYourProperty.com. Sponsors at Techsocials – which include BrainStation, Microsoft, OVH.com, Lighthouse Labs and Softlayerat this particular event – are coached by organizers beforehand to keep their introductions casual and laid-back.

“If you have this kind of attitude, you’re not pressuring people to just give you their resume or have a third-party recruiter trying to flip through people all the time,” JJ says.

Three years in, HackerNest is still completely volunteer-run and is now recognized as a federal non-profit in Canada. Though it does make it difficult to co-ordinate with volunteers as people aren’t being paid for their time, the organization likes keeping it volunteer-run to ensure that the organization is run on passion.

“You have to rely on people’s passion for getting into it rather than just being like ‘Hey, I pay you,’” JJ says. “That’s kind of nice because you wouldn’t be able to mobilize the volunteers that we have without that authentic vibe.”

Oz Nazilli, an organizer with HackerNest, agrees that the vibe makes it worth it. “The biggest thing is that you can really get bogged down in your day job or your own technology or startup, and you don’t realize what else is going on around town,” Nazilli says. “There’s a lot that’s happened in Toronto in the two years that I’ve been with HackerNest, and you can really see the scene growing.”

Overall, the event shows that as much as techies are used to connecting and networking, it all starts from a mutual passion for innovation. “Tech Socials are geared towards your inner tech nerd who just loves the idea of technology, what it can do for the world and how cool it is to be around others who feel the same,” Shaharris says. “We aren’t traditional ‘networking’ – defined as, looking for people to impress so you can use them later – you actually make new friends.”