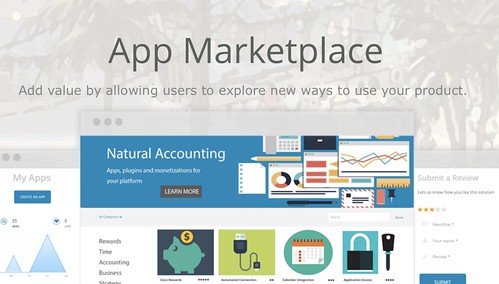 When it comes to wearable technology, the focus is usually on the devices. But without software applications, even the coolest piece of wearable tech can’t do much.

Since many of those apps aren’t being developed by the same people who build the hardware, wearable tech companies usually need an app marketplace.

OpenChannel is behind the Myo Market, the app store for Thalmic Labs’ Myo armband. Apps in that marketplace allow users to do everything from flying drones to controlling prosthetic limbs using the Myo device.

Kovacs says he sees a trend towards app marketplaces, pointing to companies like Salesforce, Hootsuite and Shopify, that have built ecosystems around their core products.

He says marketplaces benefit developers, who can build products and sell them to customers; allow the companies that own the marketplaces to offer products that are specifically tailored to a subset of their users; and give customers access additional features.

“It’s one of those few situations where everyone actually benefits,” he says.

Marketing a white label product can be a particular challenge, given that its name is in the background by design.

Kovacs says OpenChannel was struggling at first. A year, the company just wasn’t generating the sales it needed.

He and his co-founder applied to the Alchemist Accelerator, San Francisco-based program that focuses on startups who are selling to enterprise.

“It was a turning point,” says Kovacs.

He says one of the most important things the program provided was access to a network that would have been very difficult – if not impossible – to obtain without it.

After six months in San Francisco, OpenChannel returned to Toronto in November.

That’s where he wants to build his business. Kovacs says Toronto has “all the ingredients” to make a startup successful without the costs of San Francisco.

For Kovacs, it’s all about helping companies add value to their products by allowing third-party developers to make new apps for them.

No where is that more true than with the Myo armband app that allows users to control prosthetic devices.

“It’s cool to see that our customers are doing real substantial things that make a difference with their technology,” Kovacs says. “Helping a gentleman recapture his quality of life by thought-controlling an arm, that’s science fiction in every way, I love it.”