How 8 New York Startups Are Shaking up Real Estate

We recently explored why New York is drawing record amounts of venture capital, and it seems that influx of funding has led to a boom in PropTech – or property tech – that is sending reverberations throughout the real-estate industry.

And the Big Apple is at the center of that activity. Here are eight of the New York startups that are shaking up real estate.

With the mission of helping people find their place in the world, Compass simplifies the real estate process – and in just seven years since launching in 2012, the company has already become the United States’ largest independent real-estate brokerage.

It’s hard to overstate just how successful Compass has been. The startup booked record revenue for three straight months this year – its second-quarter 2019 sales were up 250 percent over the same period a year prior – and $370 million in fresh funding in July 2019 brought its valuation up to $6.4 billion. Compass has now raised more than $1.5 billion.

Unsurprisingly, a company that promises to help users find their dream homes has invested in a beautiful space of its own; its 180,000 square-foot headquarters in Union Square featuring cafes, collaboration zones, a game room, and a rejuvenation lounge. 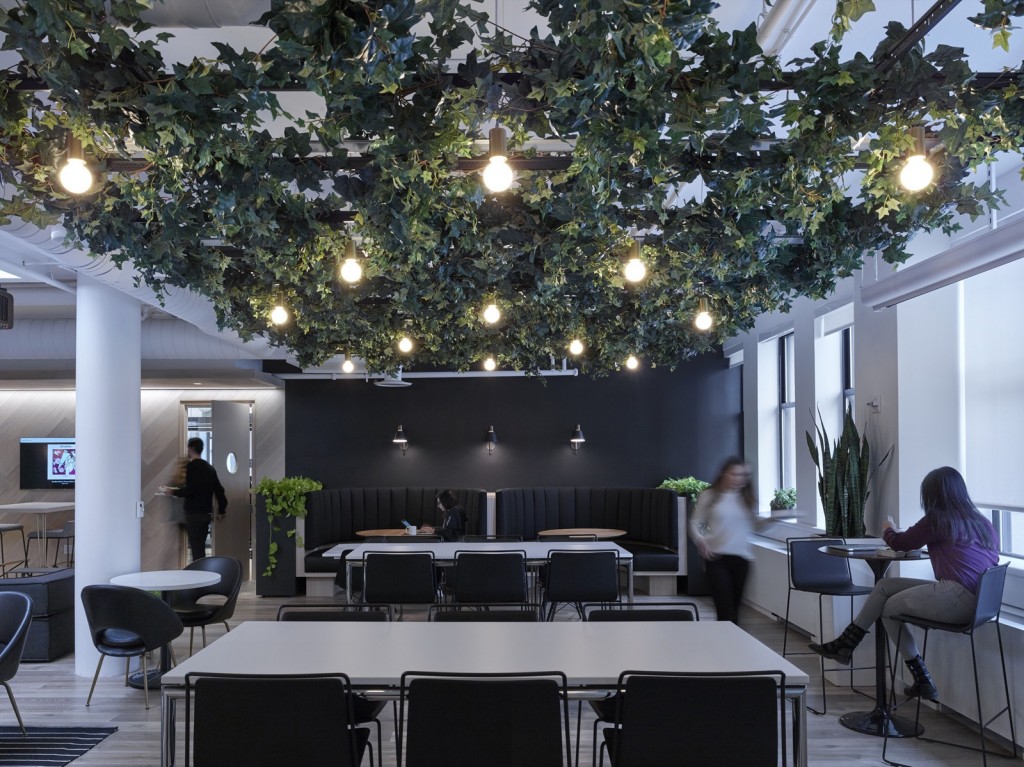 Now, 10 billion square feet of space are managed on the VTS platform across 35,000 users. With five offices around the world in addition to its global headquarters in New York, VTS received a historic $90 million Series D funding round in May – believed to be the largest-ever for commercial real estate software – that lifted the startup to unicorn status with a $1 billion-plus valuation.

It’s no wonder that VTS CEO and Co-Founder Nick Romito was named Entrepreneur of the Year earlier this year. People love working for VTS, too – it was named one of Crain’s New York Business’s 2018 Best Places to Work in New York City, with the startup being celebrated for its community building, generous paid parental leave policy, on-site coaching, continuing education stipend, flexible work schedules and unlimited paid time off.

Boasting partnerships with clients including WeWork, Tishman Speyer, Avison Young and Cushman & Wakefield, Reonomy is a New York startup that leverages data and technology to make decisions and grow businesses in commercial real estate. Using the Reonomy web app, users can sift through property searches to find the right fit for their business strategy with more than 300 filters including property type, size, sale amount, and ownership information. The company’s enterprise product, meanwhile, is used by companies to clarify and contextualize internal data

Reonomy’s most recent funding round of $30 million in June 2018 brought total fundraising up to $68.4 million for the startup, which had rolled out to 3,000 counties and 20,000 municipalities at the time with ambitions of expanding into Canada and Western Europe.

“2018 is a tipping point for data in the (commercial real estate) industry,” Reonomy CEO and Co-Founder Richard Sarkis said when the funding was announced. “We’re blown away with how quickly firms are embracing data – and how they’re using Reonomy to fuel greater intelligence, streamline workflows, and create new business opportunities.”

Anyone who has bought a house has likely faced some frustration with the lack of clarity and transparency in securing a mortgage. Better can help. With the goal of making homeownership faster and more accessible, Better offers 24/7 service, honest rate quotes free of hidden fees (backed by a price guarantee), instant loan estimates, an on-demand rate lock feature, and a total lack of commission fees or origination fees.

The company was created in 2016 after its founder, Vishal Garg, lost a home to an all-cash buyer – while his wife was pregnant with their second child – due to the antiquated mortgage process. He used the money he had saved for a downpayment to launch Better, which is able to close a typical mortgage 50 percent faster than the industry average. The startup also boasts that it saves borrowers more than $3,000 on average in up-front costs on a typical $300,000 loan mortgage.

Better has become one of the fastest-growing homeownership platforms in the country, on pace to fund more than $4 billion in loans in 2019. A $160 million Series C fundraising round that closed in August 2019 brought Better’s total funding to $254 million to date, and the company expected to hire an additional 400 people by the end of the year. Those new hires can expect a diverse and flexible workplace; Fortune placed Better on its list of the top 60 best companies to work in New York.

There are no two ways about it: moving is a pain. And that’s why – as other New York startups help people or companies find or finance the perfect home – Updater tries to take the headaches out of shifting to a new address.

The nation’s leading moving app integrates with thousands of apartment communities, real estate agents and moving companies, it conjures a moving checklist of everything that needs to be done and coordinates with the service providers, retailers, and businesses you’ll need for as smooth a move as possible. On average, the startup says it saves its users five hours, $325 and 21 phone calls and emails, and Updater assists with 3 million-plus moves per year.

Armed with $97.5 million in total funding over seven rounds, Updater has also become a fixture on lists of the best places to work in New York. That’s not surprising given that perks and benefits include unlimited paid time off, extensive health and dental benefits, company equity, a remote work program, paid volunteer time, a fully stocked kitchen, happy hours, commuter benefits, and regular surprises, including massages, a marching band, and smoothie bars. They even have “onesie days” – as in, yes, pajamas. 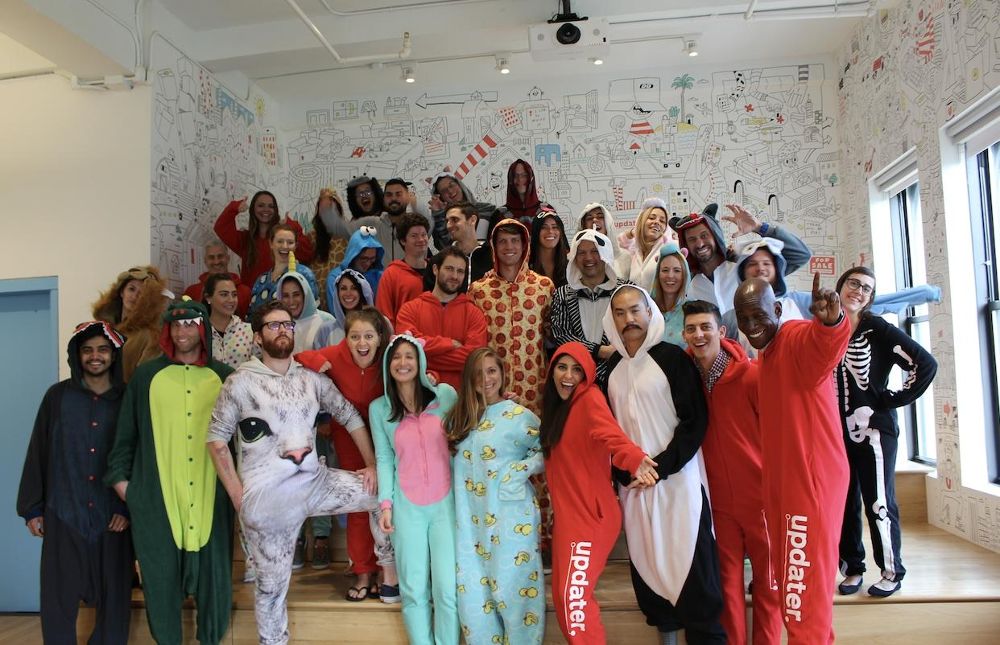 Promising to make the long-term lease a relic of the past, Knotel designs, constructs, and operates customized and fully furnished office spaces for companies of all sizes so that they have the freedom and space to grow and evolve. Not only does the startup provide sleek and custom-designed spaces tailored to your workplace strategy and brand identity, but Knotel also serves as a single point of contact – eliminating the need to deal with brokers, owners, lawyers, designers, architects, vendors, and movers – for a more efficient journey.

Perhaps Knotel is so adept at helping growing companies because of the breakneck speed of its own growth.

Founded in 2016, the flexible workspace provider completed a $400 million financing round in August 2019 to bring its total fundraising to $560 million and boosting its valuation north of $1 billion. Knotel has now grown to more than 4 million square feet across more than 200 locations around the world.

It’s a stressful dilemma for homeowners eyeing a new place: you’ve found your next dream home, but you risk missing out because you haven’t sold your current place. Enter Perch, a home-buying and selling platform that gives customers a market-price cash offer for your existing house so you can buy contingency-free before you sell, then pays you the difference if your home ultimately sells for more than your initial cash offer.

Though younger than some of the startups on this list – Perch was founded in September 2017 – there are encouraging signs that the startup is on the right track. Perch raised $220 million in a combination of equity ($20 million) and debt ($200 million, to finance home purchasing) in April 2019, particularly impressive considering that its listings are currently limited to three cities in Texas.

Perch also offers e-closing and e-notary services so its customers can complete transactions wherever they are, and co-founder and CEO Court Cunningham has said the company eventually plans to offer its own mortgage brokerage service.

With rent prices soaring in many big cities in North America Rhino seeks to help renters reduce their upfront move-in costs, both for people and businesses. Instead of forcing tenants to cough up thousands of dollars in upfront security deposits and prepaid rent, Rhino offers lease protection in the form of customizable monthly payments.

The startup reports that spaces rent 30 percent faster with its streamlined system, and its plans typically cost less than 1 percent of the monthly rent. Landlords don’t have to worry, either – owners are reimbursed instantly for excessive damage and unpaid rent, and residents pay Rhino back only if they’re at fault.

The startup just announced in October 2019 that it had raised $21 million Series A, along with a policy plan to lower housing costs in America by $45 billion over the next two years.

Another thing to like about the company? Rhino has a documented equal-pay policy, as well as medical, dental and vision benefits, unlimited time off, and a remote work program.