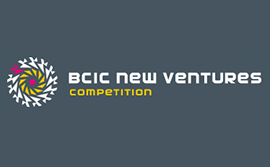 Over the past three weeks a panel of 54 jury members have been reviewing applications submitted by 123 companies entered in the BCIC New Ventures Competition.

Participants attend 12 education and networking events, work with mentors, and compete in three rounds of judging until 10 remain to compete for over $300,000 in cash and prizes.

Since 2001, the competition’s top companies have raised over $200 million dollars in financing and created more than 3,100 jobs for British Columbians.

More than 1,500 entrepreneurs have participated in the program.