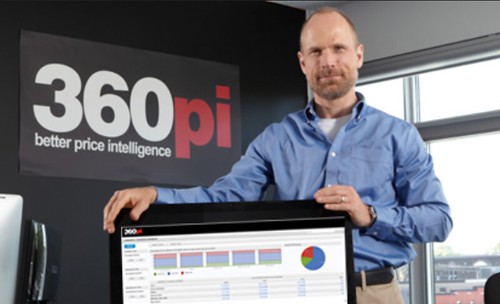 It doesn’t often happen that a startup has a product but lacks a CEO.

This was the case for Ottawa-based 360pi, a price intelligence platform for retailers.

In 2008, 360pi (formerly Gazaro) was incubated and spun out of Apption, a software provider of analytics solutions. A consumer-facing comparison shopping engine (CSE), Gazaro was looking for a user base—and a leader.

At the same time, current CEO Alexander Rink was looking for a new opportunity. After completing his MBA and acquiring experience in operations and strategy in larger companies, as well as consulting, Rink co-founded and led two companies to profitability: Infotriever and Publivate.

In 2010, an ex co-founder of Rink’s suggested he meet with Gazaro’s chairman, and their then-CTO and acting CEO.

“I felt that they had built something intriguing. They were looking for someone to come in and run this company, and commercialize it, and I had built up all of this experience for the previous 10 years or so. It was a team looking for a leader, and a leader looking for a team,” says Rink.

Rink recognized the potential in the market and technology and decided to come on board – making it the first time he had joined a startup as opposed to co-founding one.

“There was a significant market opportunity they were circling around. I liked what the company was doing in terms of analytics – I’m very quantitative. And I was attracted to the value potential for consumers.”

Despite liking the consumer model, Rink was unsure if Gazaro could successfully differentiate in the crowded comparison search engine market.

“After being there for a few months, it became clear that what we had was not different and better enough, and that’s what caused us to say, ‘Okay, what do we need to do to adjust course in order to make this business sustainable.’”

Together with the company’s first employee and CTO, Dominic Plouffe, Rink made the decision to pivot to a B2B model selling to large enterprise retailers, effectively initiating the company’s turn-around.

He bootstrapped on the consumer side to generate revenue while he focused on optimizing the company’s new B2B model. Rink and the team began reaching out to retailers to see if they would be interested in leveraging Gazaro’s price comparison technology.

“We started to explore with retailers whether there’d be some demand for the product – we felt that there would be, but we needed to test it.”

Validation came when they started generating traffic from early tests with Google AdWords. They began to receive incoming inquiries on the landing page they set up, and their calls were returned when they left voicemails with target buyers. Rink and his team won their first contract in April 2011, after only two months of operating under the new B2B model. A month later, a major retailer bought from them within a week of seeing the product demo.

They secured major retailers including Overstock.com and Best Buy in both Canada and the US. As the consumer side became less relevant, Rink and his team officially rebranded to 360pi in June 2012. Since then, the company has had continued success.

“We’ve gotten to a very good level of operational efficiency and we’re profitable, which is unusual for early stage companies. We’ve experienced strong growth over the last 5 years, and we see that trend continuing for 2016.”

This year, Rink says they’ll be providing solutions fully centred on product intelligence for both existing and potential customers.

And while the practice of comparing prices on a mobile device or online is often maligned, Rink says it’s just the way the newest generation of shoppers operates.

“The whole notion behind ‘omnichannel’ is that you need to be available to your customer wherever they want to be, whether it’s on a mobile device, at their computer, at the store or on TV. It’s our intention to be able to provide that intelligence to our customers to help them and their customers/shoppers, wherever they are.”