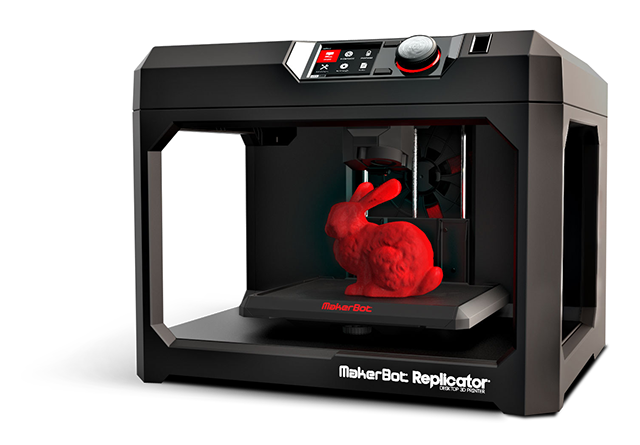 “It’s kind of grown up in the past year-and-a-half,” say Andrew Finkle, the co-founder of Waterloo-based Structur3D, which sells 3D printers and develops technology for the devices. “People are doing things that used to be done at universities in their basements.”

That means “it’s not just trinkets and toys” being printed, Finkle says. Increasingly, 3D printers are being used for medical applications.

He points to e_NABLE, a non-profit in the United States that’s using the technology to make prosthetic hands for children.

Charles Mire, Structur3D’s other co-founder, says the quick “rise from Yoda heads to functional prosthetics,” along with the work of charity groups like e_NABLE are really “showing the potential” of 3D printing.

While those prosthetics are made of plastic, Mire says advances are also being made with printing synthetic tissue using hydrogels, a material that has similar quality to natural human tissue.

Earlier this year, a Harvard professor Jennifer Lewis used that technique, along with a special printer, to create printed tissue that was interlaced with blood vessels.

The eventual goal of that process is to create synthetic flesh and blood vessels.

While there’s still a lot more work to be done on that, Finkle says related applications are already being used.

“A lot of doctors are using it as a test for operational procedures,” he says. And there are also increasing use of 3D printing for “rapid prototyping for the bio-medical industry.”

One of the biggest developments in the field was the increasing use of 3D printers to create finished products and not just prototypes, says Reuben Menezes, the marketing manager at Proto3000, a Woodbridge, Ontario-based company that offers 3D printing and engineering services as well as selling 3D printers.

“When it first kind of hit the media there was a lot of talk about the new industrial revolution,” Menezes says. “That may have been a bit premature” but it’s happening now.

He points to Normal, the New York-based company that makes custom earphones for each customer. He says there’s also a lot of Go Pro accessories being made with 3D printers.

Menezes says there are a lot of smaller companies using the printers to build “components that go into end-use products.”

Finkle also expects to see more use of distributed manufacturing, taking advantage of “networks of 3D printers” to “bring down shipping costs,” something he says is already being pioneered by American car maker Local Motors.

One thing Menezes expects to see more of in 2015 is the use of stereolithography, a process that uses resin – rather than melted plastic – that is then hardened with a laser.

Menezes says stereolithography, which has been more expensive than other forms of 3D printing, due largely to the high cost of materials, to come down in cost.

He says that should be driven by advancement in materials.

The use of non-plastic materials in 3D printing is important for Structur3D’s Finkle and Mire. Their company developed a paste extruder for 3D printers that allows them to create things using silicone, clay and other materials with similar consistency.

Finkle describes it as the “democratization of materials, you no longer need to buy expensive filament.”

But it’s also opening new doors for the technology.

Now that 3D printers can use soft materials, “people are going to design around those materials,” says Mire, and they’ll be looking for “new ways to combine hard and soft materials.”

Looking forward, Proto3000’s Menezes says he expects to see “more access” to 3D printing “when you go to into your local copy store” there will be 3D printers there.

He always expects that the industry will “continue to see mergers and acquisitions” and will “probably see a bigger company enter the space” in the next year or two.