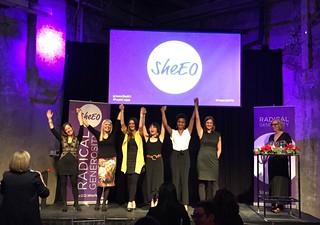 Last night at a gala in Toronto five Canadian women-led companies were named as the first recipients of Radical Generosity and will be spliting a pool of $500,000 to support their businesses.

Radical Generosity is a grassroots campaign aimed at transforming how female entrepreneurs are funded and supported.

Launched over the summer, the new funding initiative brought together a network of 500 women activators who each contributed $1,000 to create a pool of $500,000.

The radically generous women reviewed the proposals submitted from 240 female entrepreneurs across Canada and selected five ventures to give a zero percent interest loan for five years.

“While women are starting businesses at twice the pace of men, venture capital funds less than seven per cent of female-led ventures,” says Vicki Saunders, founder of SheEO. “So we put the call out for radically generous women to help us help other women and the response has been overwhelming.”

“Throwing my support behind Radical Generosity was obvious because we need a radically new way of supporting female entrepreneurs,” says Janice Diner, Activator, founder of Horizn Studios. “What wasn’t so obvious was selecting the five ventures because each showed tremendous strength and value in supporting which speaks to great entrepreneurial ideas that are being driven by women in this country.”

The five companies will receive their funding in early March and will be required to report quarterly to SheEO regarding their progress.

Sponsored by BMO InvestorLine and Freshbooks, Radical Generosity is not a charitable donation or a loan. The women activators are committing their money and time to help the five women-led business succeed. The five winners selected will have access to world-class coaching, retreats and workshops during the year of funding courtesy of the women activators. The goal is to help foster the culture of women helping women.

By 2020, the goal is to expand this venture across a thousand cities, generating a billion-dollar pool to support over 10,000 women-led ventures.