If you’ve been around for a while, as I have, you might have noticed that on a regular basis, someone like the Conference Board of Canada writes a report on Canada’s failure to secure patents.

Having been involved in the patenting process several times I find it surprisingly counter-productive for many small firms to spend inordinate amounts of time on securing patents, as it is a distraction from getting on with business with customers. But venture capitalists in general seem enamored by them, so we struggle on.

Since the Canadian narrative reaching back 50 years bemoans our ability to secure patents, I decided to look at the underlying stats to see whether commentators were misleading us or whether we are actually challenged at patenting. I ignored Triadic patents as a benchmark and I won’t go into details as to why here. (You can read the full report here in case you really like geeking out on numbers.) What I found really surprised me.

I figured that since the US is our major trading partner, I would look at our success at securing US patents as a true test of our capabilities. I was delighted to find that Canada’s success in obtaining patent grants in the US has improved by 143% over the last ten years. The number of patents with one or more Canadian inventors climbed from 3,661 in 2005 to 8,903 patents in 2015, placing us eighth on a per GDP basis against competitor countries in 2015 and in terms of our growth rate over 10 years.

On a per GDP basis, we lag countries such as Israel, Sweden and Switzerland but are ahead of France, Germany and the United Kingdom. Since we can’t be number one all the time (except in hockey) I figured that being number 8 in the US market wasn’t too bad. But then I dug deeper. I started looking at what happens to those patents once they are filed. Who eventually gets the benefit from doing the patenting? And his is where everything came off the rails.

If Canada’s future depends on our ability to conduct research locally and benefit from its eventual commercialization, then looking at who owns the patent in the long run points to a disturbing trend. As it turns out, Canada isn’t getting the benefit of the R&D done here that results in patents. Of the patents granted to Canadian inventors by the US Patent Office in 2016, 58% were assigned to companies domiciled in other countries. This is up from 45% in 2005. This means that Canada earns a return through commercialization for less than half of the patents granted in the US to Canadian inventors. 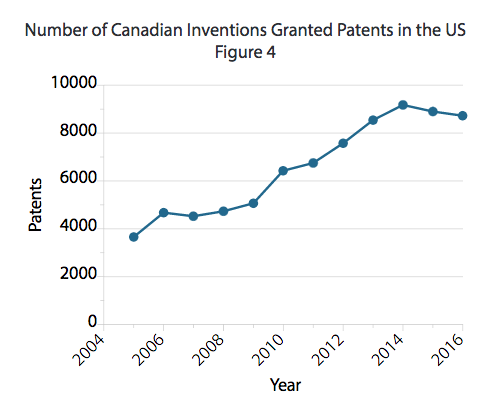 Surprisingly, Canada sits near the top in this measure: we rank third in the number of patents where the underlying research was done in Canada but where the patent was assigned to another country. This points to the true nature of our patent problem, that Canada’s critical issue is not an inability to turn invention into innovation. Our challenge is to ensure that Canada retains some of the economic and social benefits from our innovation activities.

To really get into the detail, I took a look at what’s going on at leading Canadian companies. Of the top 50 R&D spenders in Canada in 2015, 17 were subsidiaries of foreign companies (including Ericsson, IBM, Cisco, and PMC Sierra.) The subsidiaries represented 32% of all patents granted in the US to the 50 leading Canadian R&D firms. However, 96% of the patents granted to the foreign subsidiaries were assigned to parent companies in another country. That means that the benefits from almost all of the R&D work done by foreign subsidiaries in Canada are leaving Canada.

It may disturb you to find out that subsidiaries of foreign companies conducting R&D in Canada are eligible for a scientific research and experimental development (SR&ED) tax credit equal to 15% of eligible expenditures (subject to stringent rules.) But if the benefits of Canadian R&D are transferred to other countries through patenting practices, are Canadian taxpayers subsidizing research whose long-term impact is felt elsewhere? If in many cases, rights to the outputs of Canadian R&D flow to another country, then the question that arises is whether Canadian taxpayers are, or should be, subsidizing research that ultimately benefits non-Canadian businesses.

Ultimately I don’t like the use of patents as a metric to gauge our innovative abilities. Patents are an input metric; they do not correlate well with results-oriented measures such as revenue. Patents also range significantly in the quality and nature of the underlying invention (i.e., process versus product IP) that must be accounted for in the analysis.

Although using patents as a metric for how well we are performing internationally may have worked in the industrial economy, it does not work in an internationalized knowledge economy. Patenting is an international, not a local activity; and the nuances of the process must be considered before the numbers are aggregated into a single indicator for the purpose of policy making. If we are serious about improving our ability to compete internationally using R&D as a base for international growth, then we need to ensure that we use appropriate metrics rooted in strong and valid assumptions. Otherwise, our efforts will most likely remain misdirected or ineffective.

Charles Plant is a Senior Fellow at the University of Toronto’s Impact Centre. He has been the founder, CEO or CFO of several successful software companies and an investment banker and Managing Director at MaRS Toronto.