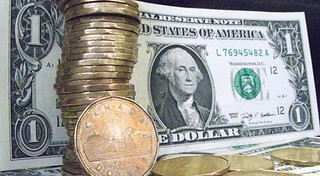 A few weeks back, David Crow wrote an article on the evolution of the Canadian technology and startup ecosystem, asking 13 great Questions For 2015.

One of them – “What impact for will the falling Canadian dollar and resource economy have on the tech ecosystem?” – is beginning to be answered in startup board meetings this month.

The driver of the question is that Canadian tech startups have a significant portion of their expenses in Canadian dollars (mostly in the R&D line item, but also in sales and marketing), whereas revenues are more typically in U.S. dollars (since the companies tend to sell their product / service into the U.S.).

But with the exchange rate having dropped 16% in the last couple of months, now hovering below 0.84, and threatening to drop even lower, management teams and their boards are now asking – “What exchange rate should we assume for our 2015 budget?”

My recommendation on this front is to use 0.90, but revisit that assumption every few months to see if there are any course corrections that should be made.  Why 0.90? – just a number really, but 0.85 seems too low given recent few years of history and how quickly it could reverse course .. yet 0.95 or 1.0 seem too high given where it currently sits.  The periodic monitoring allows for course corrections (and possibly year-end objective updates) should things change.

More importantly though, the lower exchange rate brings a “reduced” expense line versus what may have been assumed when the last round of capital was raised (I am assuming here that the start-up does its finances in U.S. dollars, but the arguments are similar if finances are done in Canadian dollars). This “found money” presents a few different opportunities for the management team:

1) stretch the runway of the business — if there was historically an assumption of 25 (Canada based) developers and a par dollar, then the company can now spend the equivalent of having 21 developers, and possibly extend the runway before the next round should be raised by two- or three- months; SRED credits amplify this stretch ability; and/or,

Given that the exchange rate could change back very quickly, I would be hesitant to make permanent changes to a business structure that count on a lower exchange rate.

Each company, market and situation is different, and perhaps the best answer is to use a blend of the three alternatives above — maybe a few extra developers to give the company that extra competitive edge, a bit more marketing spend (particularly if it can be dialled back quickly if the exchange rate reverses) and a bit more runway to have more time to increase company valuation. But for now, let’s definitely take advantage of what we have to build value.

Hat-tip to David Crow and Gideon Hayden for discussions on this topic.