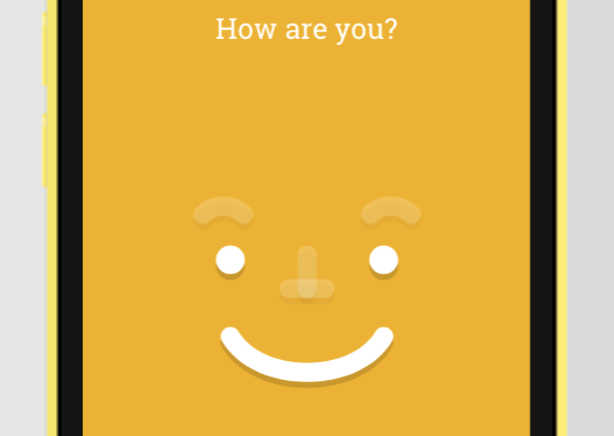 You’ve probably heard of fitness trackers that chronicle your movements and sleep habits. You might even use one of these sleek and ubiquitious gadgets. Some people find they’re indispensable for getting physically healthier.

Until recently, there wasn’t a comparable product that helped people work towards better mental health.

An app called Moodnotes hopes to change that, though, by encouraging users to be more aware of the reasons behind their emotions.

It’s no secret that doing something every day is a major key to turning that activity into an unconscious habit. Moodnotes urges users to document how they’re feeling every day. If that sounds like a bore, and something you’d rather document in the form of a Facebook status update, don’t be so quick to judge Moodnotes harshly. It’ll even send out notifications so you don’t forget to make an entry.

You may be pleasantly surprised at just how seamless and quick the process of describing your emotions actually is. The app will lead you through several prompts that change based on how you respond to each one. It’s like a choose-your-own-adventure for your mental health. Moodnotes drives the experience with an animated face that changes to match your mood. The app’s leading question is simply, “How are you?”

Once you respond, the app’s background color shifts accordingly. If you’re happy, it might be bright green, and if you’re feeling down, it’ll probably be a blue or gray hue. The app will then ask you to enter a description that gives insight into why you’re feeling a certain way.

After finding out the basic details about what’s going on, the app will prompt you to “tag” the entry with a short descriptor of how you’re feeling—whether it’s tired, bored, or something else entirely. Finally, it’ll ask you to evaluate whether you’re falling into a pattern where you react in a certain way to some situations even when that response isn’t warranted. It’s entirely possible, and even likely, that the app could prove to be a valuable addition to more structured treatment options for people dealing with addictions and other destructive behaviors.

After you have made 10 entries in the app, you’ll be able to see the fluctuations in your mood as a graph. At that point, Moodnotes will also ask if you’ve been able to identify any trends in the reasons why you feel a particular way.

The app is a collaborative effort between Ustwo—a London design studio—and two clinical psychologists, Edrick Dorian and Drew Erhardt. Moodnotes’ concept is based on cognitive behavioral therapy, which tries to help people notice the links between how they feel and how they perceive the world around them.

Psychological experts believe that, when people get clued into their negative thought patterns, they’ll have the knowledge necessary to shift those harmful tendencies into a more positive mindset and act more appropriately within a given situation.

This isn’t the first time Dorian and Erhardt have explored how technology can foster better mental health. In 2011, the pair released an app called MoodKit. According to Dorian, the demand for MoodKit has been consistent since its release, and tens of thousands of people use it. However, Moodnotes is more streamlined than MoodKit, and has a sharper focus in terms of its purpose.

The benefits of journaling are well documented. Perks include greater self-awareness and better regulation of emotions. However, many people think they simply don’t have time to sit down and put pen to paper each day. Others would rather just do something to numb their feelings than try to productively process them. It’s the reason why just about every pleasurable past-time, including gambling, tends to carry a disclaimer warning of the complications that can arise from abuse. It’s fine to immerse ourselves in life’s pleasures from time to time, but it can be devastating to get lost in them entirely.

The Moodnotes app caters to people of all stripes because it eases users into the task of making sense of what they’re feeling, and proves that it doesn’t have to be laborious or scary.