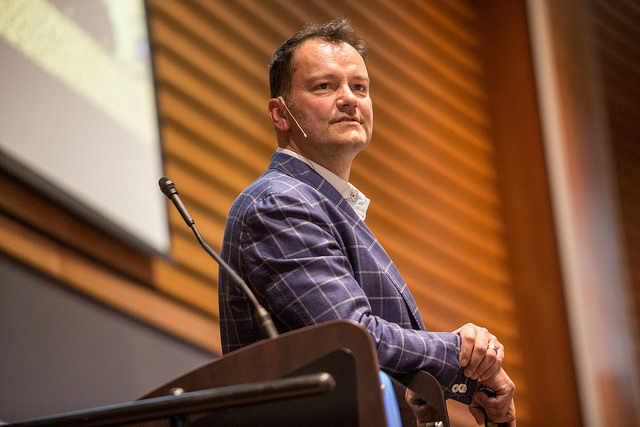 The Alberta tech community came together once again at AccelerateAB, held this week in Calgary.

The annual event, which is put on by The A100 and The C100, is a celebration of entrepreneurship and tech startups in the region.

The Startup Roundtables sessions, which match select startups in Alberta with mentors from The A100 and The C100, kicked off the event on Tuesday. This year, 15 startups were chosen to connect and interact with 50 mentors:

Uzair Ahmed, cofounder of the Edmonton-based instaMek, said that though their startup is very early-stage, this was a good time in their company growth to receive advice from the mentors at the roundtables.

“We were at the point where we were like, ‘Are we doing the right thing? Are we working hard enough? Are we even in the right business?’” said Ahmed. “I’m glad we came and cleared our doubts, clarified our business and it was crucial for us.”

Alison McMahon of TwoFold also appreciated the focus that the mentors were able to give to their company at the sessions. “They were not shy about asking the hard questions, which I think is what startups need.”

The mentors at the roundtables were also impressed by the enthusiasm of the startups chosen for the sessions, as well as that of their fellow mentors.

“We are starting to see a maturing of the ecosystem here in Alberta,” said Shaheel Hooda, Chairman of The A100. “The companies seem to be getting better; the entrepreneurs are getting better. And so are the mentors. I think we’re starting to get better at really honing in on what matters most to companies at this stage.”

Day Two of AccelerateAB kicked off with the ‘Scaling up your startup’ workshop by Flightpath Ventures before moving into the public program, which was held at the Roderick Mah Centre for Continuous Learning at Mount Royal University.

Lane Merrifield, co-founder of Club Penguin, kicked off the event. In the talk called ‘Lessons Learned,’ Merrifield spoke about his experiences and the challenges he faced while building his company, which he started with his co-founders as a safe place for their children. He also spoke about Club Penguin’s acquisition by Walt Disney.

“Find your ‘why,'” Merrifield told the audience. “Chase great ideas, not dollars to be successful.”

The conference was wrapped up by an enthusiastic speech from Jamie Clarke, CEO and Co-Founder of Live Out There Inc. Clarke’s inspirational speech featured stories from his travels around the world and the lessons that he applied to entrepreneurship.

“I believe the heart of an adventurer and an entrepreneur are the same,” said Clarke to the attendees.

Clarke also shed some light on the recent earthquake in Nepal, where he had traveled to many times and summited Mount Everest in 2007. Live Out There has raised $25,000 to donate to the Kunde Hospital in Nepal.

The next AccelerateAB will be held in Edmonton in 2016.