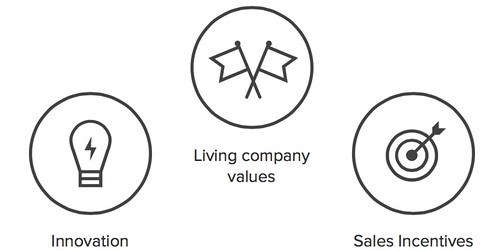 Different organizations pursue this mentality among their employees in several ways, and Achievers is one example of a platform attempting to simplify the engagement process. But could it really be as simple as keeping employees happy, engaged and emotionally compensated? According to the Toronto-based success story, who will be celebrated at this year’s Spotlight Awards, it’s exactly that simple.

The Spotlight Awards will honour this year’s Unicorn and Centurion Canadian companies. The event will be celebrating Centiruons’ Achievers along with Chango, PlentyofFish, Recon Instruments, Stingray, and VerticalScope, as well as Unicorns Shopify and Slack. The Spotlight Awards have defined Centurions as companies that have had a $100 million-plus exit and Unicorns as companies valued at over $1 billion.

Achievers is a cloud-based employee success platform designed to increase employee engagement by delivering social recognition and rewards. The platform allows employees to share these successes on social media, collect points and cash in these points for rewards such as vacations or the latest gadgets.

Founded by Razor Suleman in 2002 and originally called I Love Rewards, Achievers was bootstrapped for five years after its creation. In 2007, Achievers raised its Series A. What followed was a Series B round in 2009 and in 2011, Sequoia Capital led a $25 million investment into Achievers’ Series C financing – the firm’s largest investment in HR tech at the time. Achievers has since become one of North America’s leading employee rewards and recognition programs. Earlier this year, Achievers secured a $137 million acquisition by Blackhawk Network – all payments made in cash.

Suleman says in an interview with Business Insider that rewarding the small victories is just as important as rewarding the big ones. This serves as a key motivator for employees to continue working effectively.

“Rewarding people for time doesn’t make the most sense — what if you could reward them for performance, for hitting their sales goals or for providing great customer service?” Suleman told Business Insider.

Business Insider went on to say that Achievers’ “social network-like platform” is used by companies such as Microsoft and Samsung to help employees achieve their goals and recognize them for their contributions. Furthermore however, Achievers allows employees and managers to see their team’s accomplishments and employee programs all in one place.

Achievers’ mandate speaks to a larger trend of a lack of passion among employees worldwide, emphasized when the employee recognition platform lost 40 per cent of its staff in 2006 for failing to live by that mandate.

According to Becky Reuber of the Globe and Mail, in the attempts to rapidly grow the company, founder Razor Suleman did exactly what Achievers stood to rectify – he paid attention to his market at the expense of what was happening internally.

He stated that “department interests were not aligned and weren’t working together effectively. Communication throughout the company was poor, and employees didn’t feel recognized or valued for their work.”

After recognizing these shortcomings, Suleman guided Achievers from 12 employees in 2006 to over 200 employees serving an international roster of customers today. He credits communication and positive reinforcement.

Jonah Revesencio states in an article for Fast Company that, quite simply, happy employees are more productive – by approximately 12 per cent, specifically. The study referenced, attributed to the University of Warwick also reported that unhappy employees were 10% less productive than their contended counterparts.

When looking at employee engagement on a larger scale, there is no company on record better at maintaining employee satisfaction than everyone’s favourite tech giant: Google.

“Companies that invest in employee support and satisfaction tend to succeed in generating happier workers,” said Professor Andrew Oswald, one of three researchers who led the study conducted by the University of Warwick. He went on to say that at Google, employee satisfaction rose 37 per cent as a result of those initiatives, and concludes that financial incentives aren’t enough to make for highly productive employees.

In February 2015, Google ranked number 1 on Forbes’ “100 Best Companies to Work For.” An example of the rewards and incentives offered to Google employees includes its recently revamped parental benefits. Google now provides $500 of “Baby Bonding Bucks” to all new parents during their child’s first three months.

A recent Gallup survey reveals that a mere 13 per cent of employees worldwide are engaged at work.

The study states that “The bulk of employees worldwide—63%—are ‘not engaged’, meaning they lack motivation and are less likely to invest discretionary effort in organizational goals or outcomes. And 24% are ‘actively disengaged,’ indicating they are unhappy and unproductive at work and liable to spread negativity to coworkers.”

The world is facing an epidemic of chronic employee disengagement and Achievers not only promotes an environment of positive reinforcement and communication, but serves as an example that the warnings ring true.

In Achiever’s quest to ignite within employees a passion for the 9 to 5, they’ve reported fulfillment capabilities in more than 110 countries, and have attracted several high-profile clients. Through thick and thin, Achievers proves again that they know how to treat the middle class.