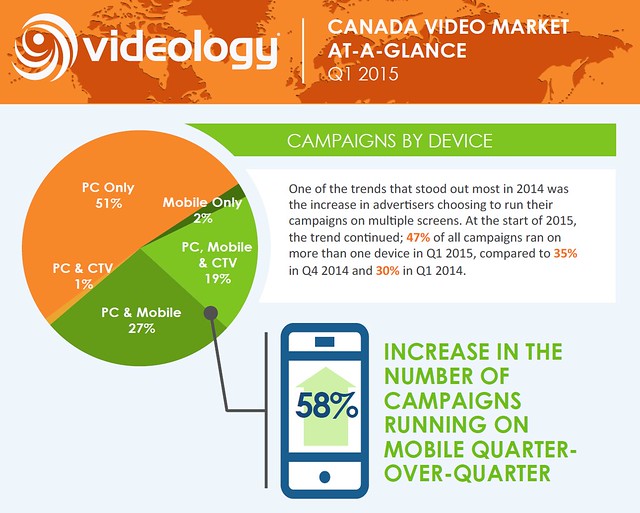 Videology, a leading software provider for converged TV and video advertising, found that Canadian advertisers are increasingly planning their video strategies holistically, and as a result, mobile has been the greatest benefactor.

According to an analysis of Videology’s platform usage in Canada from the first quarter, the total number of campaigns delivered on mobile increased 58% compared to the previous quarter. In Q1 2015, 48% of all campaigns had a mobile component to them, compared to 35% in Q4 2014 and 28% in Q1 2014.

The analysis, titled the First Quarter Canada Video Market At-A-Glance, found 47% of advertisers ran their campaigns on more than one screen (e.g., PC and mobile) in Q1 2015, compared to just 30% in Q1 2014.

The analysis also found Canadian advertisers are continuing to buy their digital video ads as they do for TV, on a guaranteed CPM basis – 93% of advertisers did so in Q1, compared to 89% a year ago.

“This current climate of consumer-driven convergence is driving marketers to view planning, buying and executing on TV and digital through a more holistic lens,” said Scott Ferber, Videology Chairman and CEO. “As the industry continues to improve standards and work toward achieving more seamless ad experiences, mobile will increasingly play a larger role as part of that cross-screen equation.”

Other key findings from the newly designed infographic include: