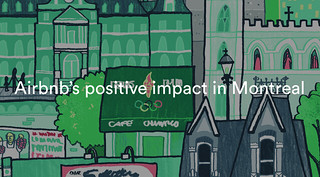 Airbnb released a new study today that highlights the positive impacts the Airbnb community has in Montreal.

The study found that the Airbnb community contributed $54.6 million in total economic activity in one year in Montreal and examined the environmental and social benefits that come from travelling with Airbnb.

The study is the first to examine Airbnb’s positive economic, social, and environmental contributions to Canadian communities and comes after similar studies in Paris, London, and San Francisco.

The study found that travelers who use Airbnb enjoy longer stays and spend more money in Montreal. Guests who travel with Airbnb are also more likely to stay in areas outside of typical tourist zones, frequenting local businesses and contributing to neighbourhood economies.

Zifkin will be a keynote speaker at the upcoming Dx3 Conference in Toronto in March 2015. During his keynote Zifkin will demonstrate how AirBnB has become one of the world’s most authentic online communities and what it means to truly be the most hospitable “host” on the Internet. Register now to hear Zifkin at Dx3.

These interactions not only offer economic benefits, but also build community and foster cultural exchange. Additionally, the study found that this type of travel results in significant reduction of energy, water use, and waste generation, and encourages sustainability among both residents and visitors.

“Airbnb is having a clear, positive impact on the Montreal market, as well as the city’s tourism industry, neighbourhood businesses and local households. This study further reinforces what we have learned from our findings in other cities: that Airbnb offers tangible global benefits and gives travelers the chance to belong anywhere,” adds Zifkin.

The study released today examined data on Airbnb rental activity in Montreal for the 12 months from April 2013 to March 2014.