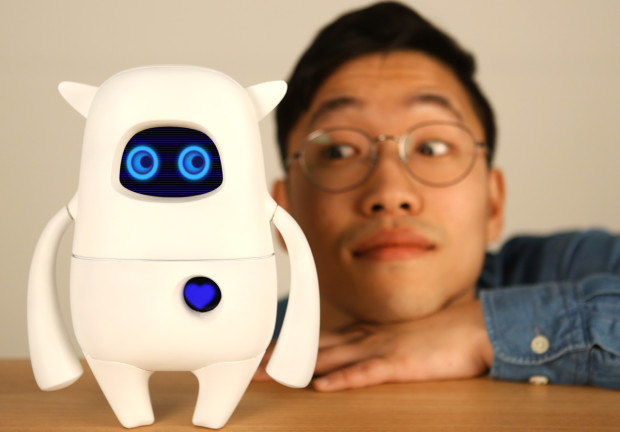 AKAStudy, a technology company dedicated to machine learning and natural language processing, has created what they call the first true A.I. device.

“Musio can have a back and forth dialogue and remember things that you’ve said before,” says Celina Lee, business development director at AKAStudy.

To demonstrate its conversational ability, AKAStudy’s linguist, Jacob Bradsher, held a conversation with Musio. “How are you doing with your jetlag?” Musio asks him. “Just a little tired, it was a long flight,” Bradsher says. “I have a joke. What do you call a bicycle that can’t stand up on its own?” Musio asks. “Too tired!”

“It’s sarcastic, it’s funny, and we want people to react to Musio in the same way that they’d react to a friend, not a robot assistant,” Lee says. Their Indiegogo, with a $50,000 goal, has so far raised almost $17,000, and gives backers the option to buy a developer kit and a kid’s package with their contribution.

The team says that they are the first “truly” AI device because, unlike Musio, AI programs like Siri and Watson are static.

“If you ask them a question in a way that they aren’t programmed to respond to, then you’ll get an answer that you don’t want or didn’t intend to get,” says Bradsher. “We want Musio to converse with people organically, and we don’t want it to feel forced.”

Originally, the idea behind Musio was to help children who might be English language learners develop their skills at home, which would be more affordable than hiring a tutor. However, the team realized that native English speakers could also use the conversational abilities of Musio to build up social skills, and teach kids a sense of responsibility by having them feed and dress Musio. It could even appeal to techies who were just interested in new technology.

With Musio, the team hopes that they can alleviate some of the concerns that people have with emerging AI technology.

“Our responsibility as humans is to use technology in a way that can better our lives, not the other way around. One way that we’re doing this is by using AI and applying it to the education space,” says Lee. “We want to provide opportunity for people who wouldn’t otherwise have it, and reduce the opportunity gap between the rich and poor.”