Venture capital is a key component of the startup ecosystem and thus an important driver of economic growth—perhaps more so than ever.

But are VC firms caught up in a new-age hype?

Historically, successful VC-backed companies went public within a few years of their first round. More recently, many such companies have remained private and grown to enormous size without a public listing (think Uber and Airbnb).

These massive startups, dubbed “unicorns,” are more prevalent than ever before, with an estimated 200-plus worldwide currently. Their combined valued exceeds $600 billion and even major mutual fund providers have started investing assets directly into unicorns.

But deciphering the financial structure of a unicorn, which often have many classes of shares, is difficult. New research from the UBC’s Sauder School of Business and Stanford’s Graduate School of Business has found that, as a result, roughly half of all unicorns are actually overvalued—in some cases, grossly.

“These unicorns’ common shares and stock options are even more overvalued, because they are usually worth less than any convertible preferred share,” writes UBC’s Will Gornall in his paper, titled Squaring Venture Capital Valuations with Reality. “Some unicorns have made such generous promises to their preferred shareholders that their common shares are nearly worthless.”

The average highly-valued, venture capital-backed company reports a valuation 49 per cent above its fair value, according to Gornall’s research, with common shares overvalued by 59 per cent.

53 out of 116 unicorns studied for the report lost their unicorn status when their valuation was recalculated. 11 of those companies were found to be overvalued by more than 100 per cent. 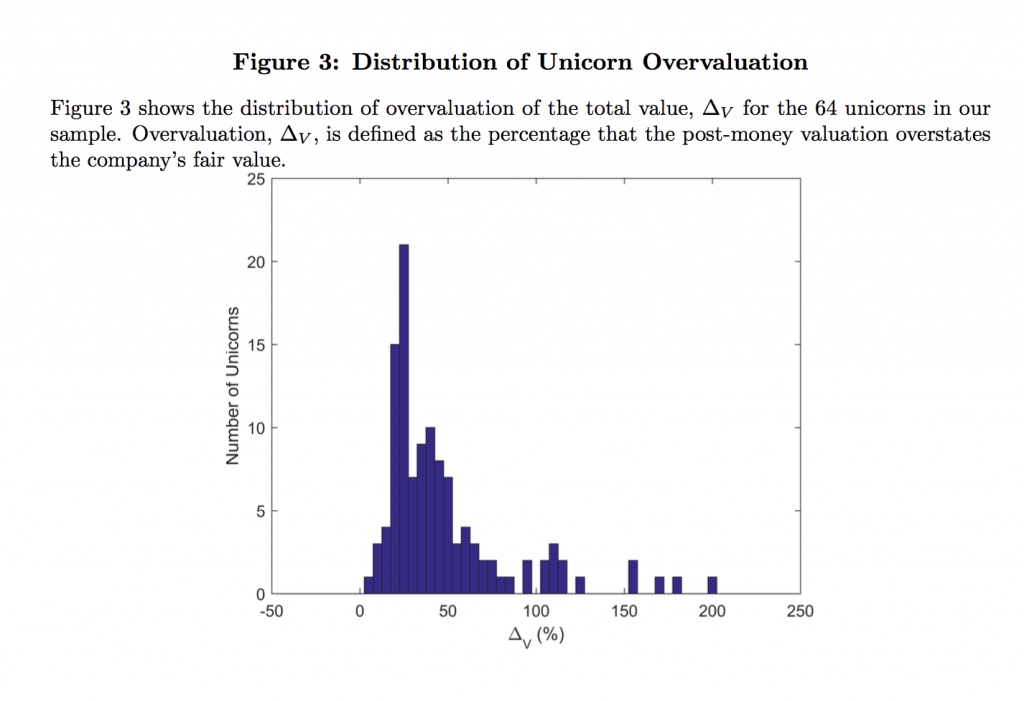 53 per cent of unicorns have given their most recent investors either a return guarantees in IPO (14 per cent), the ability to block IPOs that do not return most of their investment (20 per cent), seniority over all other investors (31 per cent), or other important terms.

The report found that zero unicorns were undervalued, and zero has their correct value pegged—which means 100 per cent of unicorns might be overvalued to some degree.

Now, the public perception of the value of a unicorn may not matter. But oftentimes media-reported valuations are the ones many employees—and even some smaller investors—rely on to determine the worth of their stock.

“Almost all startup employees and many investors are unaware of their intricacies and do not understand the valuation implications,” says Gornall. “This lack of information is particularly troublesome because of the large variation in overvaluation between companies.”

As startups get bigger on average, so do the firms investing in them. There are more $500 million-plus venture capital funds in the US now than at any point since the dot-com boom, according to Dow Jones VentureSource.

Strebulaev doesn’t expect over-valuations of companies to go away. But he does encourage those involved to educate themselves on the terms of the deals so that they understand how much their slice of the pie is worth.

If you buy into a unicorn and it turns out to be a horse, you’ll be disappointed when it can’t fly.