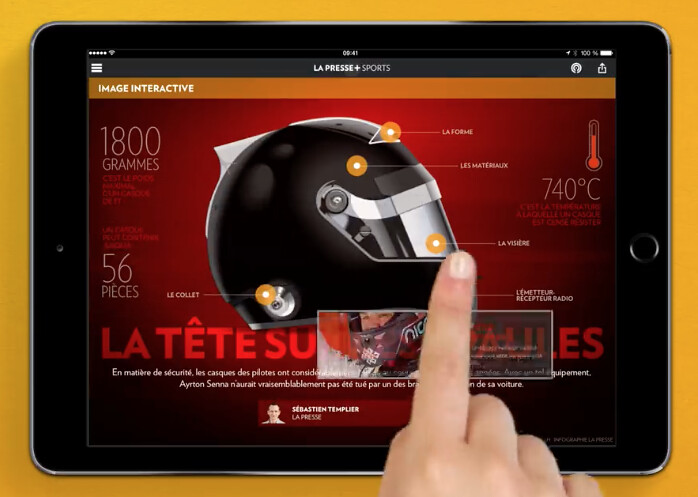 One of Canada’s largest newspapers is about to go almost entirely digital.

As of Jan. 1, La Presse, the highest circulation newspaper in Quebec (and the third highest in Canada) will cut its print edition from six days a week to one. Only the Saturday edition will spared as the paper stakes its future on its tablet edition.

Many large newspapers (including La Presse) have cut back a day of printing to save money. Other, mostly smaller, papers and magazines have gone online-only for similar reasons.

But this plan is not about saving money, though it will in the long term. Instead, it’s a fundamental shift for the 131-year-old newspaper.

Over the past decade-and-a-half the general trend in the newspaper business has been towards cutbacks and layoffs, doing more with less. When newspapers have introduced tablet and smartphone editions, they’ve generally moved existing staff around. The apps themselves are often just modified versions of their websites or scanned copies of the print edition.

But La Presse did everything differently when it launched its free La Presse+ tablet edition in 2013.

The paper hired 100 new designers, developers and analysts to build the app from the ground up. Another 120 journalists were hired to create work specifically for the tablet edition. The total cost over the first three years was $40 million.

That type of spending and that type of hiring just aren’t things that newspapers do these days. But the paper’s executives said they had to make an investment in the future before it was too late.

“Let’s take an example,”  Guy Crevier, the paper’s publisher and president told NetNewsCheck. “You have $100 million in revenue, and you’re losing 17 per cent this year. You’re going to be at $83 million. Where are you going to be next year? Should you do something to protect your profitability or should you wait until you’re at the end with $40 million?”

Rather than see the tablet edition as secondary to the print product (as many newspapers still do) or the main website, La Presse became a tablet-first publication.

“Since 2013, the message from management has been clear: We work first and foremost for the tablet,” Charles Côté, a journalist at the paper and the president of the union that represents newsroom staff, told The Globe and Mail.

“La Presse+ is now more successful than the print version of La Presse after 131 years of existence,” Crevier wrote.

The paper now gets more readers through its tablet edition – around 460,000 a week – than it does in print and that number is growing. Print readership, on the hand, has dropped by over the past two years.

La Presse’s other digital formats are also successful: its website gets around 600,000 unique visitors a week, while its mobile app has over 150,000 users logging in every day..

But what real sets the tablet edition apart, and why the paper has put it front and centre, is advertising revenue.

For La Presse, like every newspaper, revenue from print advertising is declining and advertising revenue from web and mobile hasn’t replaced it. After all, web ads are cheaper than print ads.

Tablet ads are something different.

“A half-page ad in La Presse+, at $68 per thousand impressions, now earns La Presse substantially more than the $42 paid for the same space and reach in print,” according to The Globe and Mail.

60 per cent of the paper’s advertising revenue now comes from the tablet addition. The other digital versions put together bring in just 10 per cent.

The paper is also licensing its technology. The Toronto Star, Canada’s most-read newspaper, launched an app based on La Presse+ last week.

For the past 15 years, the newspaper business has struggled to keep up with changing technology. If La Presse’s bold experiment is successful, it could give new life to an industry that once seemed condemned to shuffle its way towards death.