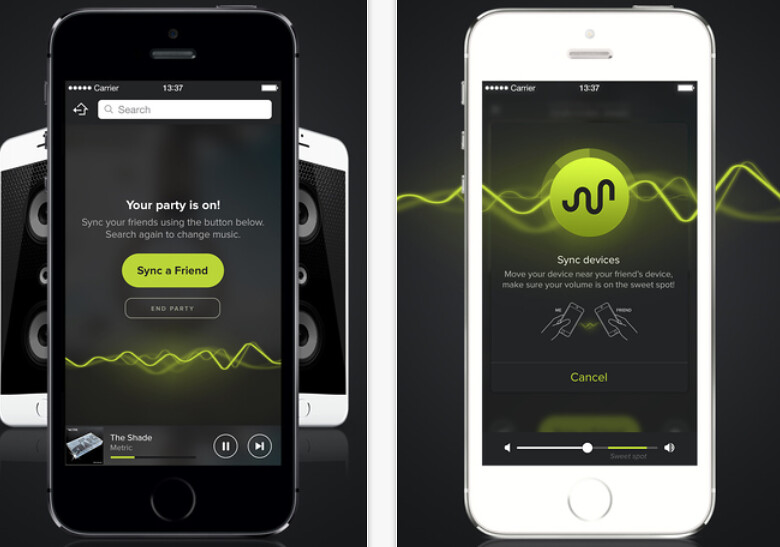 Portable Bluetooth speakers have rapidly grown in popularity but if one Montreal startup has its way, those speakers will soon be a thing of the past.

AmpMe founder Martin-Luc Archambault says he got the idea for the app when he went to visit a friend in her new, empty, apartment.

“It all started about a year ago, I was at my friend’s new apartment, she was just moving in and it wasn’t furnished, I brought a bottle of champaign to celebrate and say congratulations. We’re about three or four people there and there’s no music yet,” he says. “So I just did what a lot of people do … you put your phone in the middle of the table and you put some music on but the sound is not that great.”

That’s when he says he had an idea.

“Wouldn’t it be nice if we could all sync our phones together,” he says, “because we all have speakers in our pockets.”

Archambault, a serial entrepreneur, is probably best-known as the founder of social search engine Wajam, but he’s also made a name for himself as an investor. He currently appears as one of the “dragons” on Dans l’œil du dragon, the Quebec version of Dragon’s Den.

But getting multiple phones to play the same music at the same time was easier said than done.

“We worked on the technology for about a year before it actually worked,” Archambault says. “The hard part is actually syncing the phones to the millisecond.”

If they’re off by more than 50 milliseconds, he says, “it sounds pretty awful.”

His team tried multiple strategies, he says. Bluetooth was considered but rejected because it didn’t support enough devices and the technology doesn’t let Android devices sync with iPhones. They also thought about using wifi networks but seemed to complicated for users.

“We wanted a solution that would work whether you’re connected on wifi, whether you’re on Rogers, Telus, Fido, 4G, LTE, whatever, as long as you have an internet connection it should be working no matter what device you have,” Archambault says.

Ultimately AmpMe solved the problem by adding a high frequency digital fingerprint to the stream itself – the phones pick up the signal though their microphones and sync their streams based on that signal.

Archambault says phones need to placed close together to sync, a process that takes five to 10 seconds, and then can be moved anywhere.

Currently, AmpMe only works with SoundCloud but Archambault says deals with more streaming services are in the works.

As for the quality, he says that with a few phones, “the sound quality actually becomes better than a Bluetooth speaker.”

And he only expects that to get better.

“In the next few years the speakers on phones are going to become exponentially better than what we have today, a little bit like how cameras on phones made the digital camera obsolete,” he says, “I think that’s going to happen with Bluetooth speakers as well.”