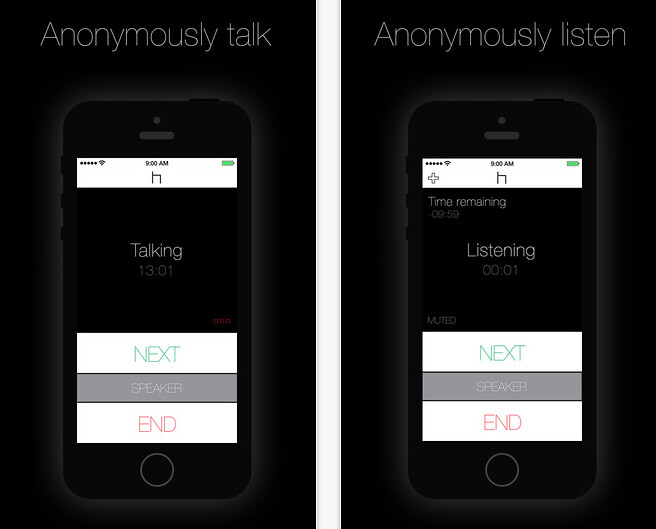 What if you weren’t sure where to go with your innermost thoughts?

Anonymous applications have proliferated, but most of them are textually based. You can tell your story, but it is confined in a limiting context. The only mode of expression you can hope to achieve with them is through the power of sight: text layered over images that can convey feelings and meaning, but cannot immerse.

Hear is an iOS application that fills that void. It allows you to connect randomly and anonymously with people via phone calls. Acting like a ChatRoulette for audio-only phone calls, the application has garnered thousands of users in a short time span by connecting individuals with one another in serendipitous, anonymized calls.

The caller doesn’t know the receiver. Aside from some selection criterion around gender and age ranges, the application is a completely random voyage. You can choose whether to talk or to listen: a bunch of spectators can listen in, but nobody knows anybody’s identity, and spectators cannot say anything during the conversation. They must listen to what the talker has to say, creating a set of social dynamics that allows for a unique style of conversation.

The founder, Sterling, was previously associated with the creation of Epic Meal Time, and is now working diligently to create a whole different type of community.

He’s remained true to his word, and hasn’t analyzed or held any of the phone calls in his application, but he has listened in as a live spectator just like anybody else can. The conversations that he’s glimpsed have revolved around personal stories: questions of life, love, of how to talk to that girl, how to deal with the remorse of cheating.

It’s a community wherein people are constantly pushing the barriers of what it means to interact with strangers, finding solace in an active ear even if if it doesn’t belong to anybody they might know.

Trolls and bullies are moderated through the use of a reporting function. The community collaborates with one another to protect one another.

Liberated from the constraints of social pressure, Hear is encouraging a set of genial conversations. It’s become a new way of expressing oneself, and a new way for people to understand others.

It’s also, just like the best of communication mediums, allowed for people to peer into the mind and lives of others.

Imagine being a fly on the wall in a myriad of conversations around the world. This is exactly what Sterling thinks Hear offers, and he has constructed the application around the concept that you will pay for that curiosity. Talking time is unlimited, but listening time is not. You have to pay to peer into what others are thinking, to sate your need for genuine talk.

The next step for Hear is to categorize that talk into different topics, allowing for everybody to pursue their topics of choice. It will allow a look into how complete strangers express themselves in the arena of familiar themes, from politics, to the latest technological advances—an organized free-for-all that will take place free from the constraints of identity.

There has been a burning need for many to return to the roots of the Internet: anonymous, and free from the social constraints of the world outside. Hear pursues this by extending anonymity to phone calls. It encourages fearless conversations, and a community that listens. It tells the stories that require voices to flesh out, and sympathetic ears to hear.