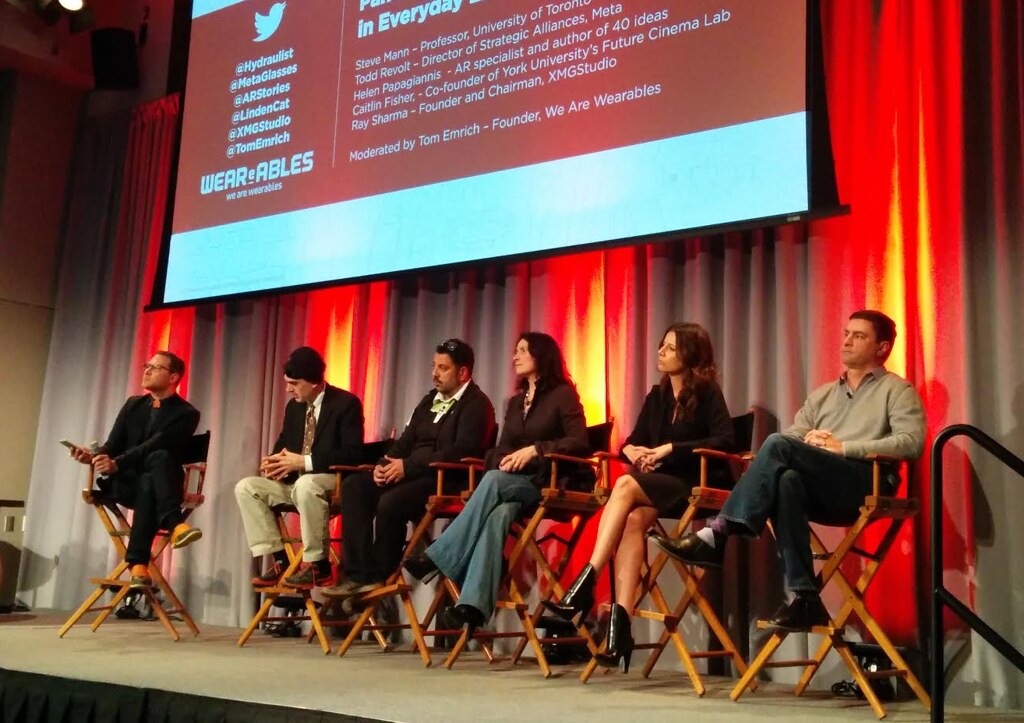 ​Once again, We Are Wearables founder Tom Emrich marveled at the turnout of this month’s We Are Wearables – almost 800 people signed up for the event – which focused on wearable computing and augmented reality.

The event featured a panel on AR from industry experts, the Canadian premiere of the Meta Glasses, augmented reality glasses that let you create and share objects in your environment, and a speech from Steve Mann, a Toronto-based scientist who is widely regarded as the father of wearable computing. Though Mann has been inventing wearable computing tech since the early 1980s, probably his most famous inventions include HDR (High Dynamic Range) Imaging, which is used in many manufactured cameras today, and his EyeTap Digital Eyeglass, which look like the Google Glasses of 30 years ago. He talked about his fascination with AR stemming all the way back to his childhood, when he built devices to visualize sound waves, and how this passion has continued up until now, as the current scientific director for Meta Labs.

“A meta conversation is a conversation about conversations, and meta sensing is the sensing of senses,” Mann says about their work, adding that people must continue making this kind of technology to better humanity. “As leaders in this world, it’s incumbent upon us to create this incredible and amazing way of seeing the world.”

The goal of California-based Meta Labs, a Y Combinator alumni, is to have true scale holograms appear in the physical space without the use of markers, and have holograms anchored to certain spaces, like tables and walls.

“There’s a lot of interest right now from people in architecture and engineering, because these people use 3D models every day at work,” said Brendan Works, the director of product.

Todd Revolt, the manager of strategic alliances, adds that there are a variety of industries interested in the technology, including those in the health care sector.

“They want to be able to do medical simulations and cut down on the costs that they have. Right now, you need very expensive mannequins that are fit white men,” Revolt said. “Not everyone is a fit white man. So they can create a 3D visualization of, say, a baby or a pregnant woman.”

Meta Labs started shipping developer kits in early October of last year. “This kit is a platform for testing those ideas and refining the user interface that will make this useful in the future,” Works said.

The panelists that came after the Meta introduction focused on ways that AR would fit in everyday life. Caitlin Fisher, co-founder of York University’s Future Cinema Lab, believed that AR could make the our physical reality more exciting.

When asked if AR could possibly devalue the experience of actual reality, Helen Papagiannis, an AR specialist and the author of 40 Ideas, was skeptical.

“The way I perceive augmented reality is that it will combine all of these things like The Internet of Things, wearable computing, big data and contextual computing,” Papagiannis says. “I think there’s still a place for physical objects in the real world, they will just be more shape-shifting.”

Ray Sharma, chairman of Toronto-based game developer XMG Studio Inc., added that we are entering a more “second generation” augmented reality. Though XMG Studio Inc. won a Best Augmented Reality App from the Best App Ever awards just two years ago, when they designed an augmented reality Ghostbusters game, he feels that even that was outdated.

“I feel it was so 1.0 augmented reality. I look at that and it’s so simplistic,” Sharma says. “Right now we’re able to interact with technology and, using markerless technology, place digital objects in the real world.”