Autodesk changed the creative world when it unveiled its computer-aided design software, AutoCAD, on a floppy disk in 1982.

The program helped users create 2D drawings faster; it was the first Autodesk offering from then CEO John Walker and a small team of programmers. Since its flagship program, the California-based company has kept innovating through 3D modeling additions, and now expanding the bounds of virtual reality.

Today, Autodesk offers over 100 professional products that are used by 12 million professionals. Over 200 million customers use Autodesk’s consumer apps for anything from home remodeling to 3D printing.

Since the mid-80’s, the team has grown to more than 8,900 people around the world, but Autodesk’s mission remains unaltered: help people imagine, design and create a better world—and build them the software to do just that.

For the past two decades, every winner of the highly coveted Academy Award for best visual effects used Maya, Autodesk’s animation software, in their moviemaking—including The Lord of the Rings and Avatar. Despite its Oscar-aiding design solutions, Autodesk’s software remains free for students, teachers, academic and institutions worldwide, in addition to nonprofits and entrepreneurs who are creating an impact through creative design.

In 1999, Autodesk set up shop in Canada after acquiring Montréal-based Discreet Logic, a company in the media and entertainment industry. With that, Autodesk Canada took over their 54,000-square-foot office space and kept its stunning views of the city’s heritage granaries and canal. 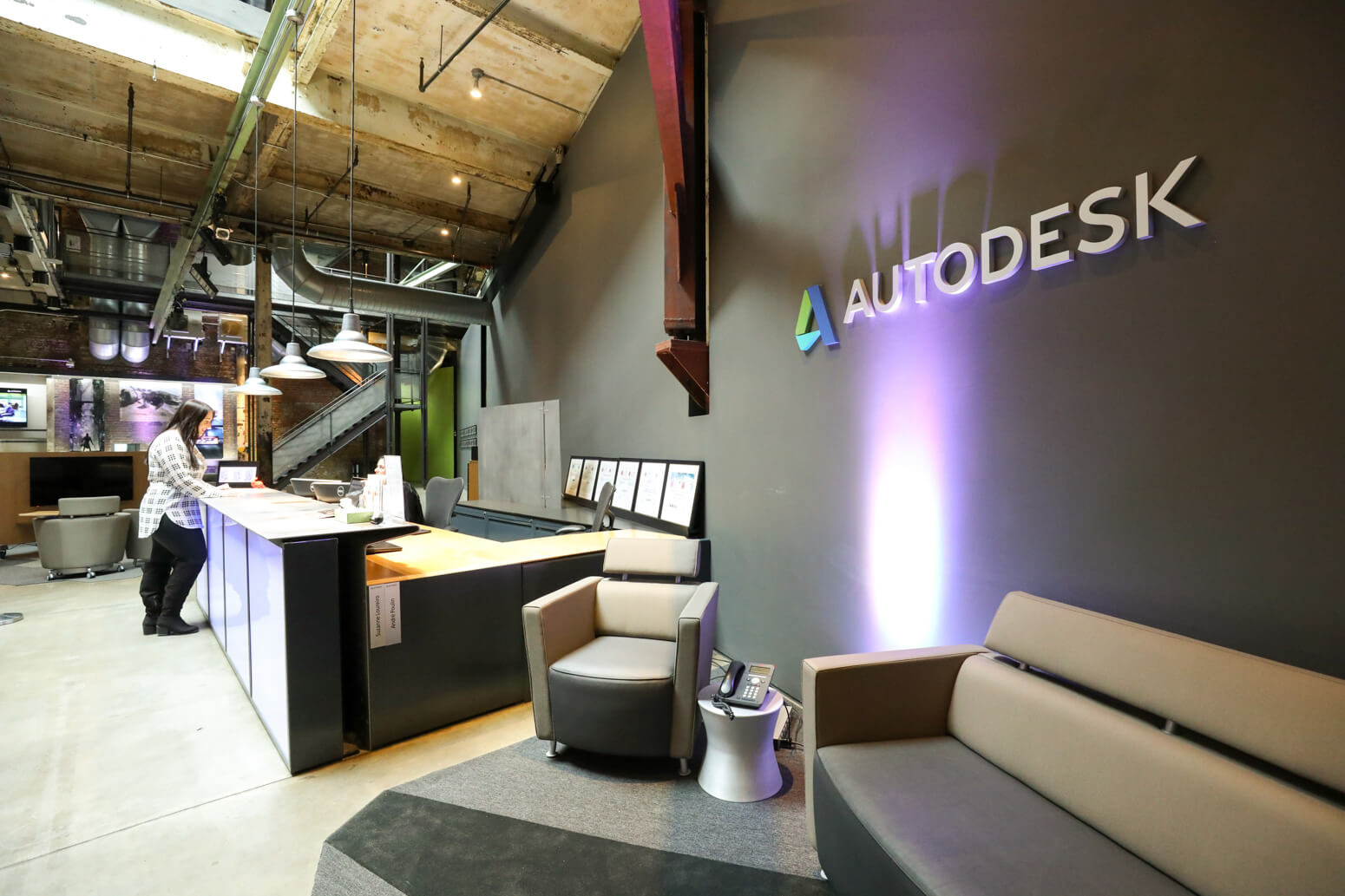 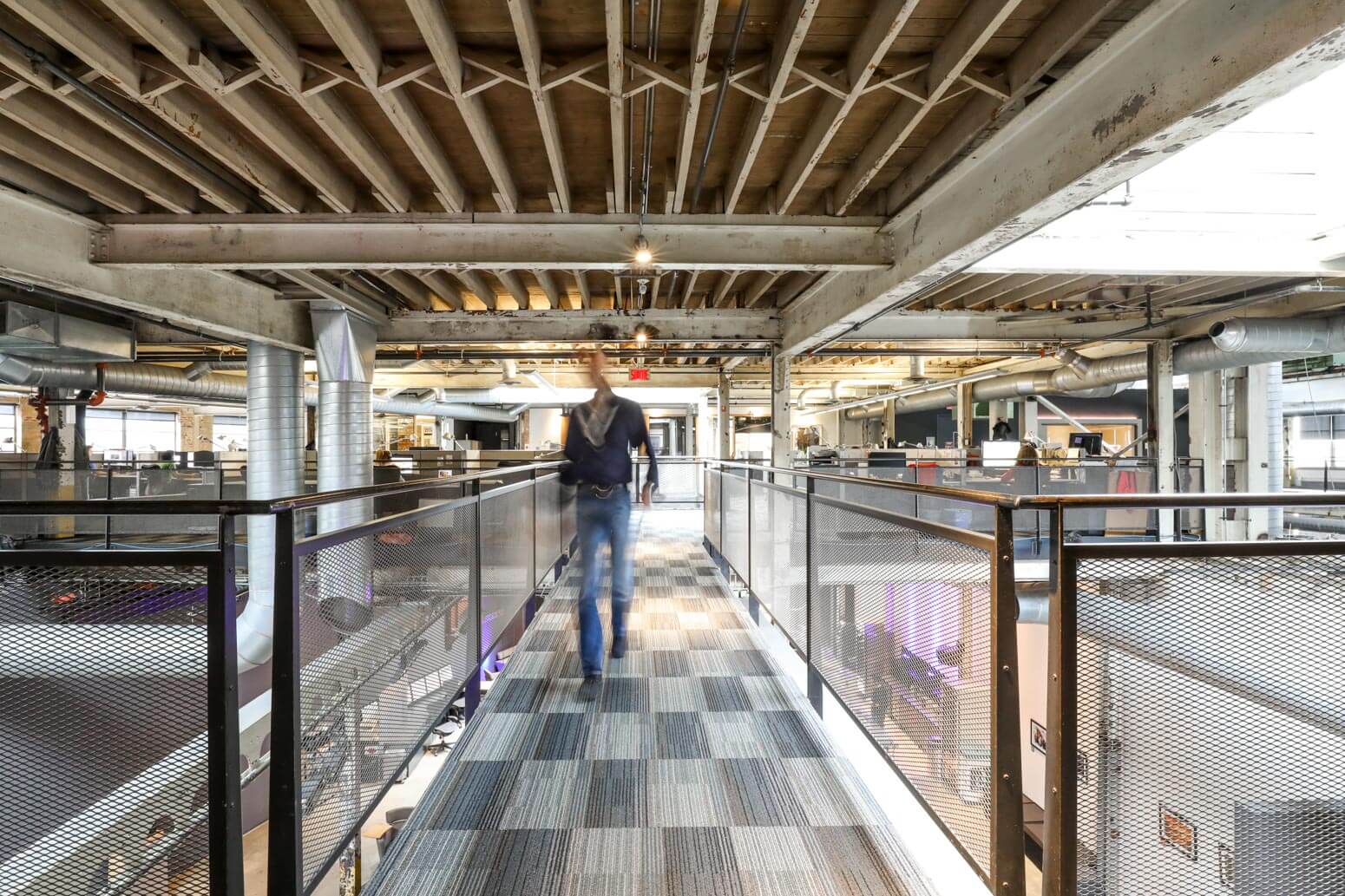 Discreet Logic was the first technology company to make a home in the once abandoned area that became a base for Montréal’s high-tech companies: Cité du Multimedia. Nestled beside the Lachine Canal and Montréal’s Old Port, Autodesk Canada works inside a 19th-century industrial building on Duke Street. The company’s media and entertainment division operates from the two-floor open office environment, along with engineering and marketing teams. All in all, Autodesk’s Montréal roster totals 400 people. 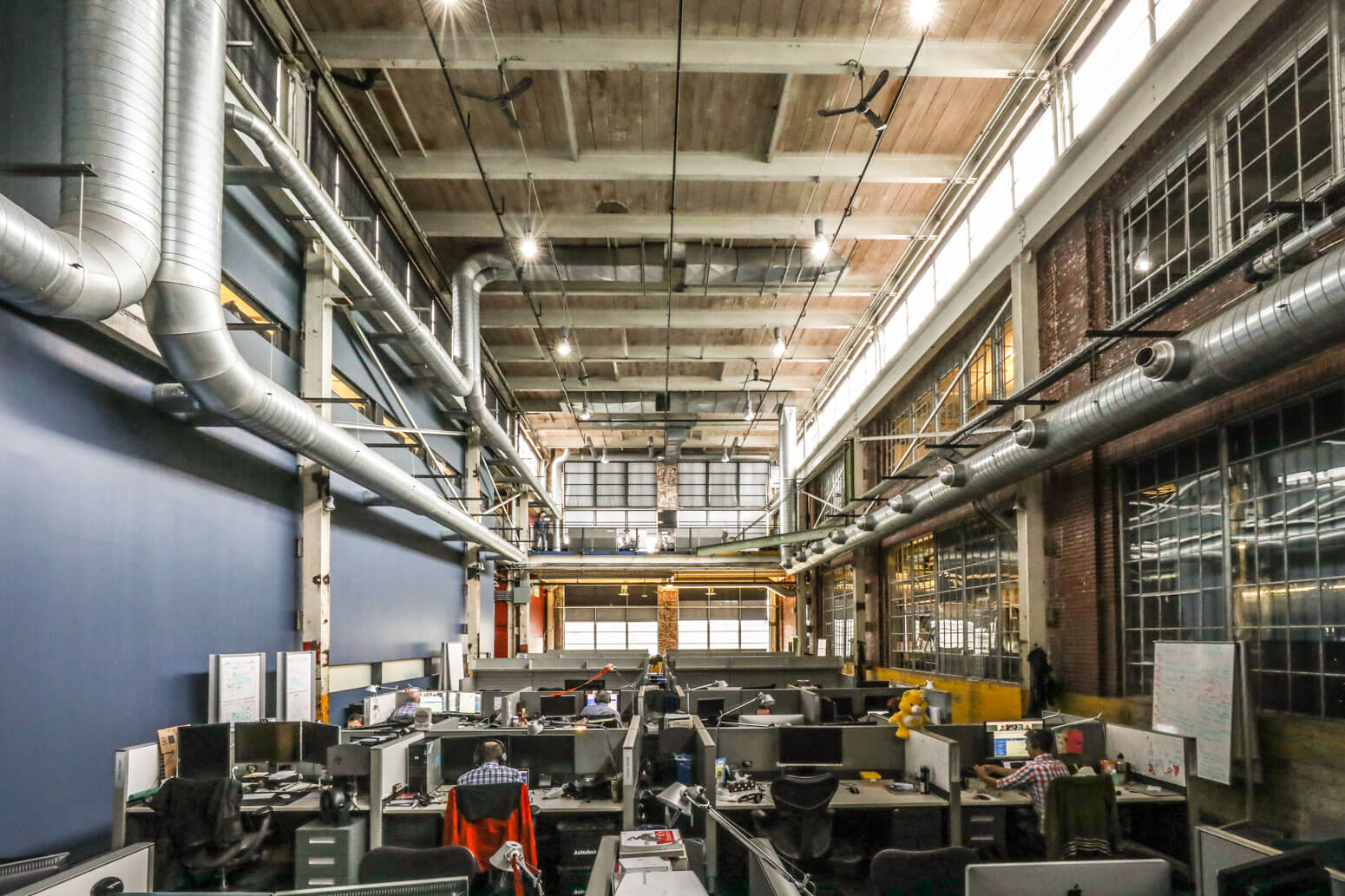 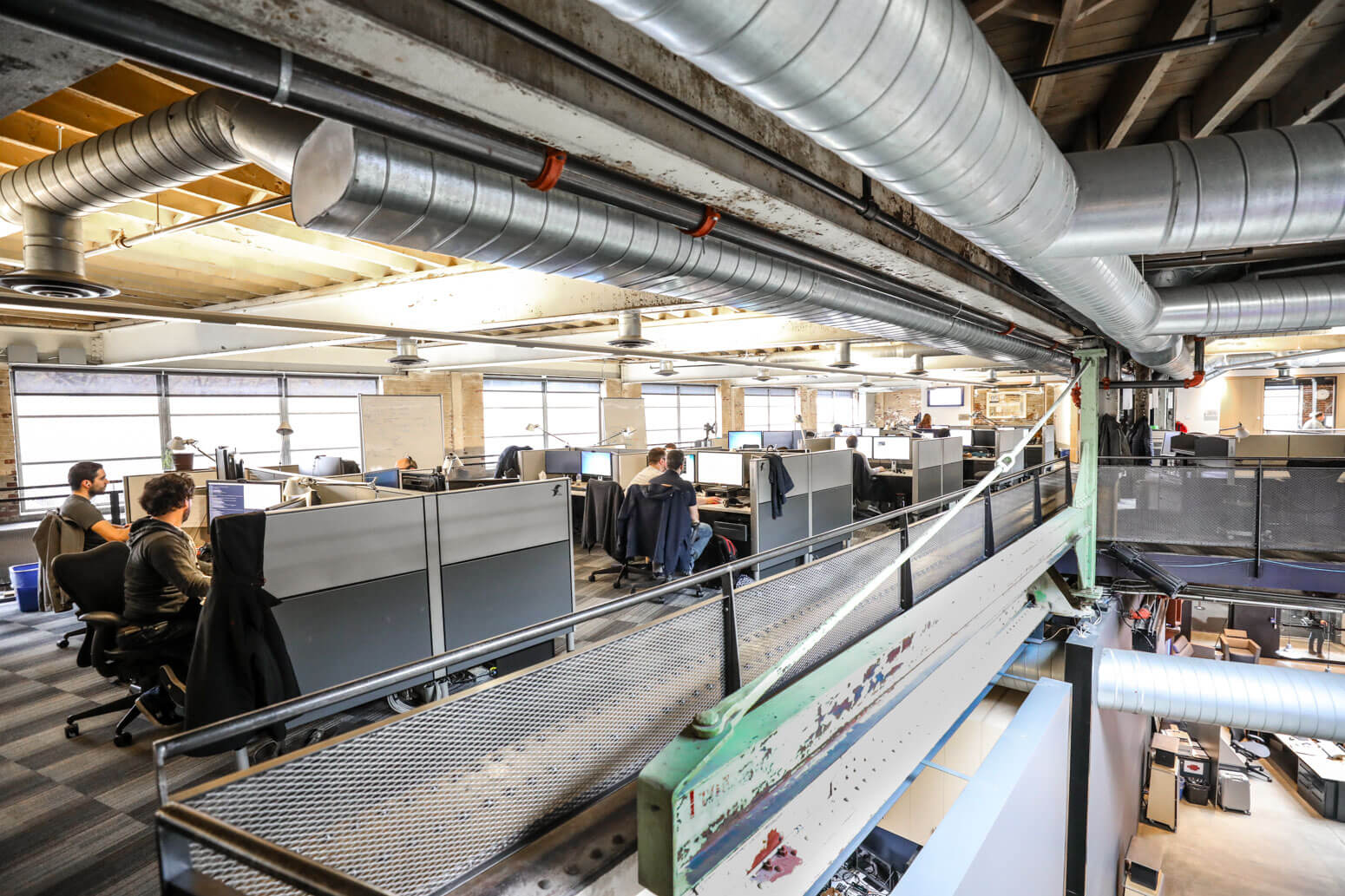 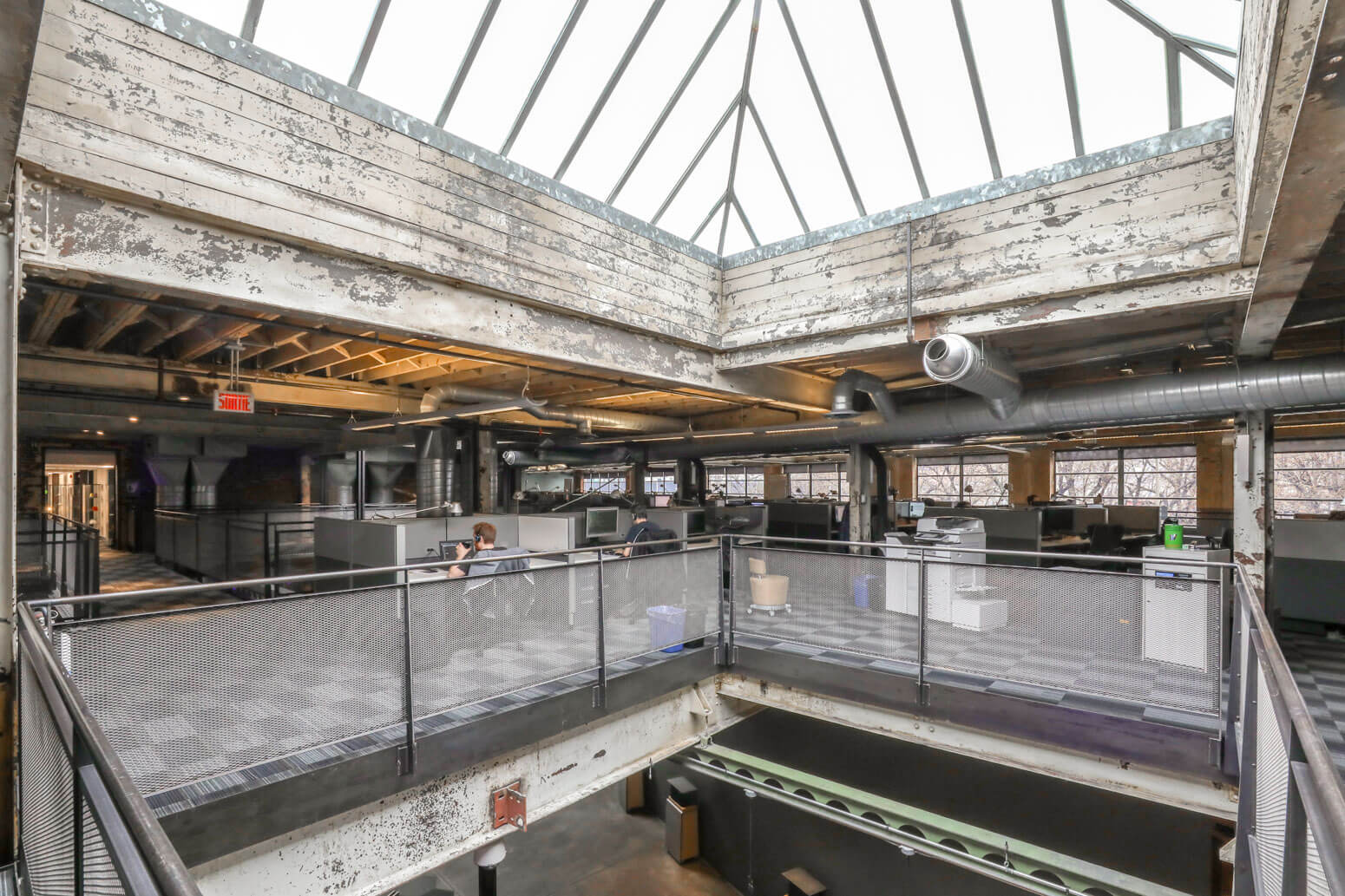 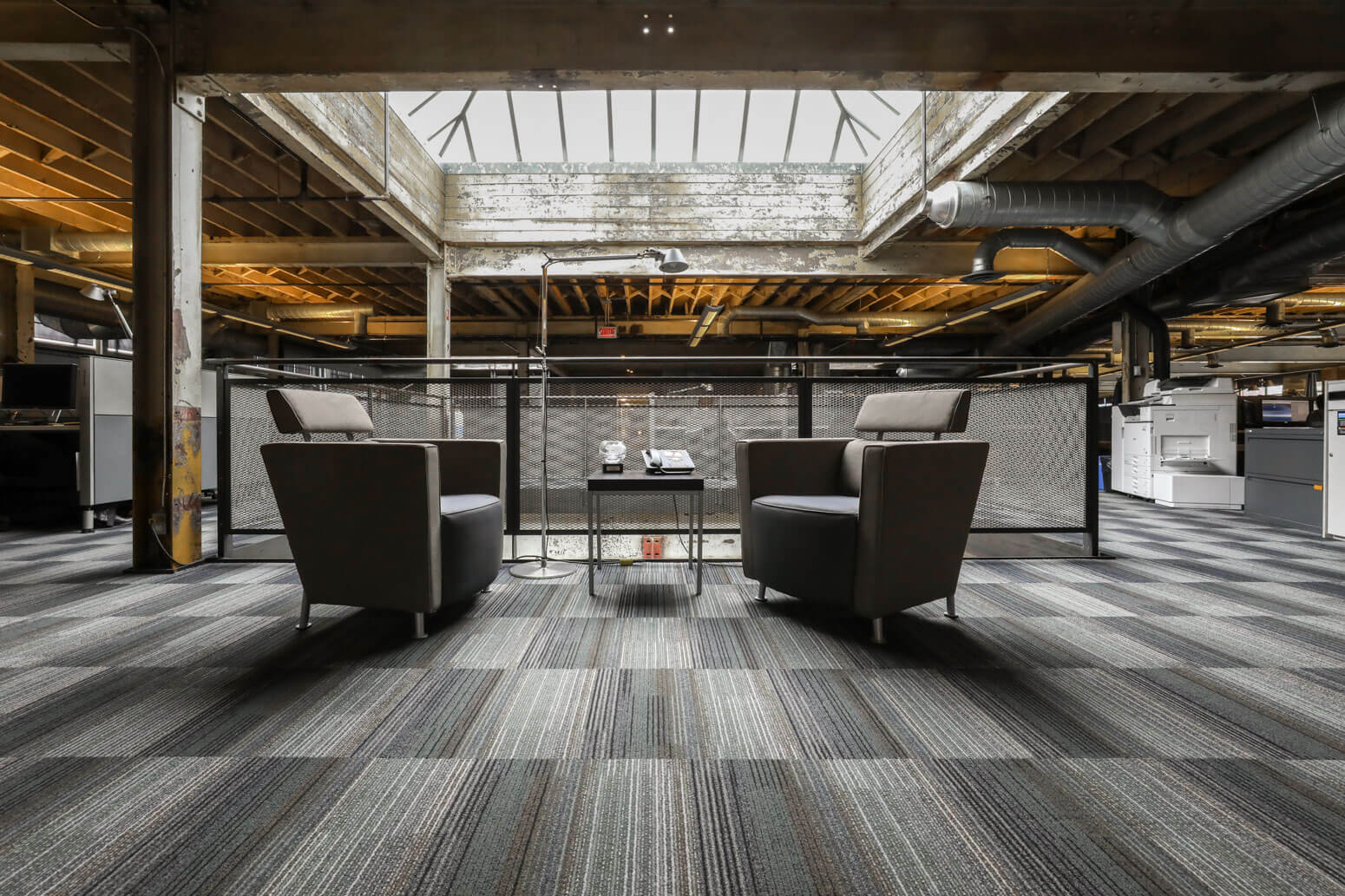 The expansive industrial space was once used for assembling and repairing ships, a history that’s reflected in existing steel beams, exposed brick walls and waxed concrete floor, restored with the help of In Situ.

The office features casual breakout areas for impromptu gatherings or private conversations and larger meeting rooms for more formal sit downs. All the space’s enclosed rooms are clustered together in the centre of the office to make sure as much natural light as possible can pour in through the building’s windows. 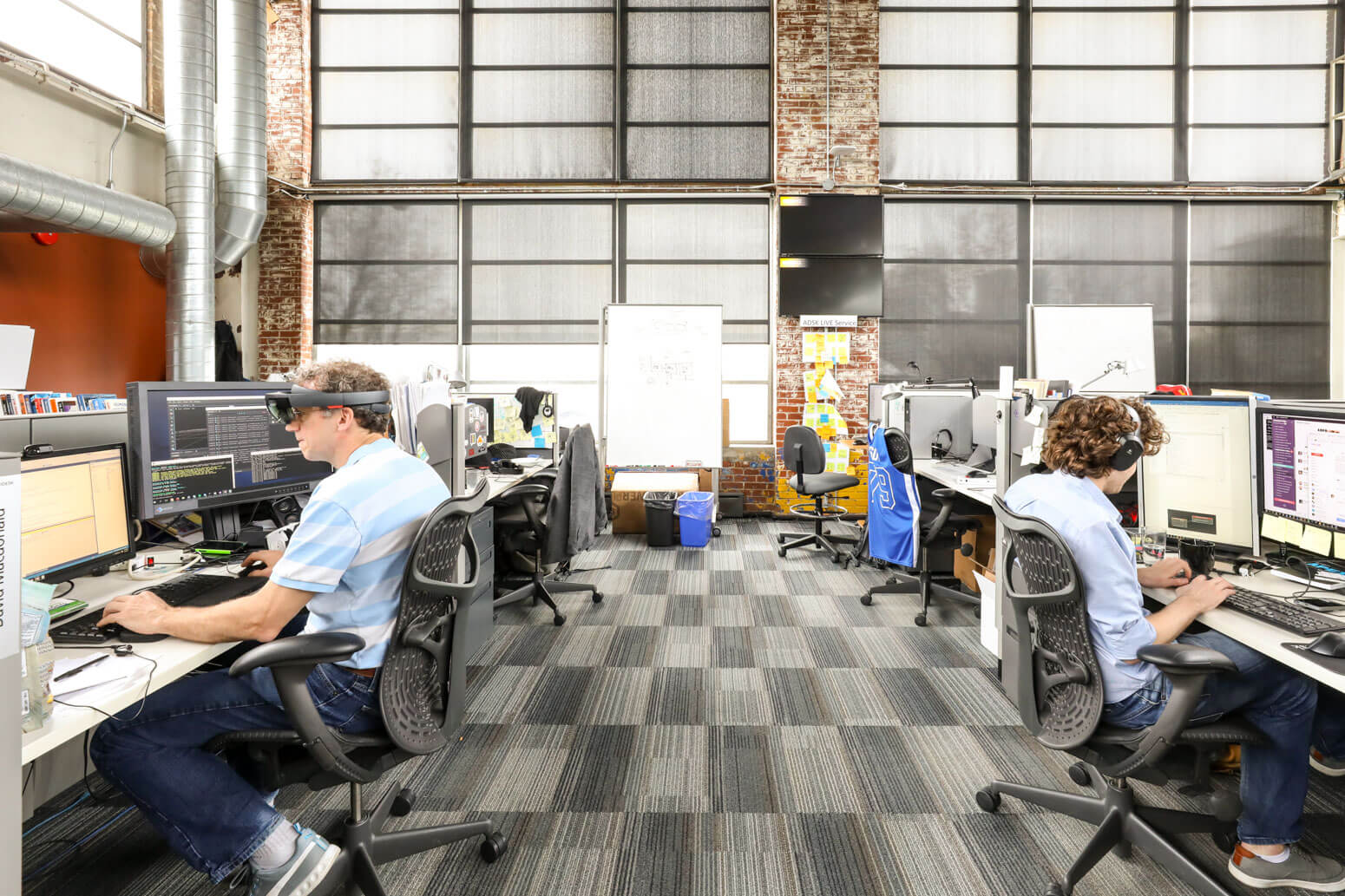 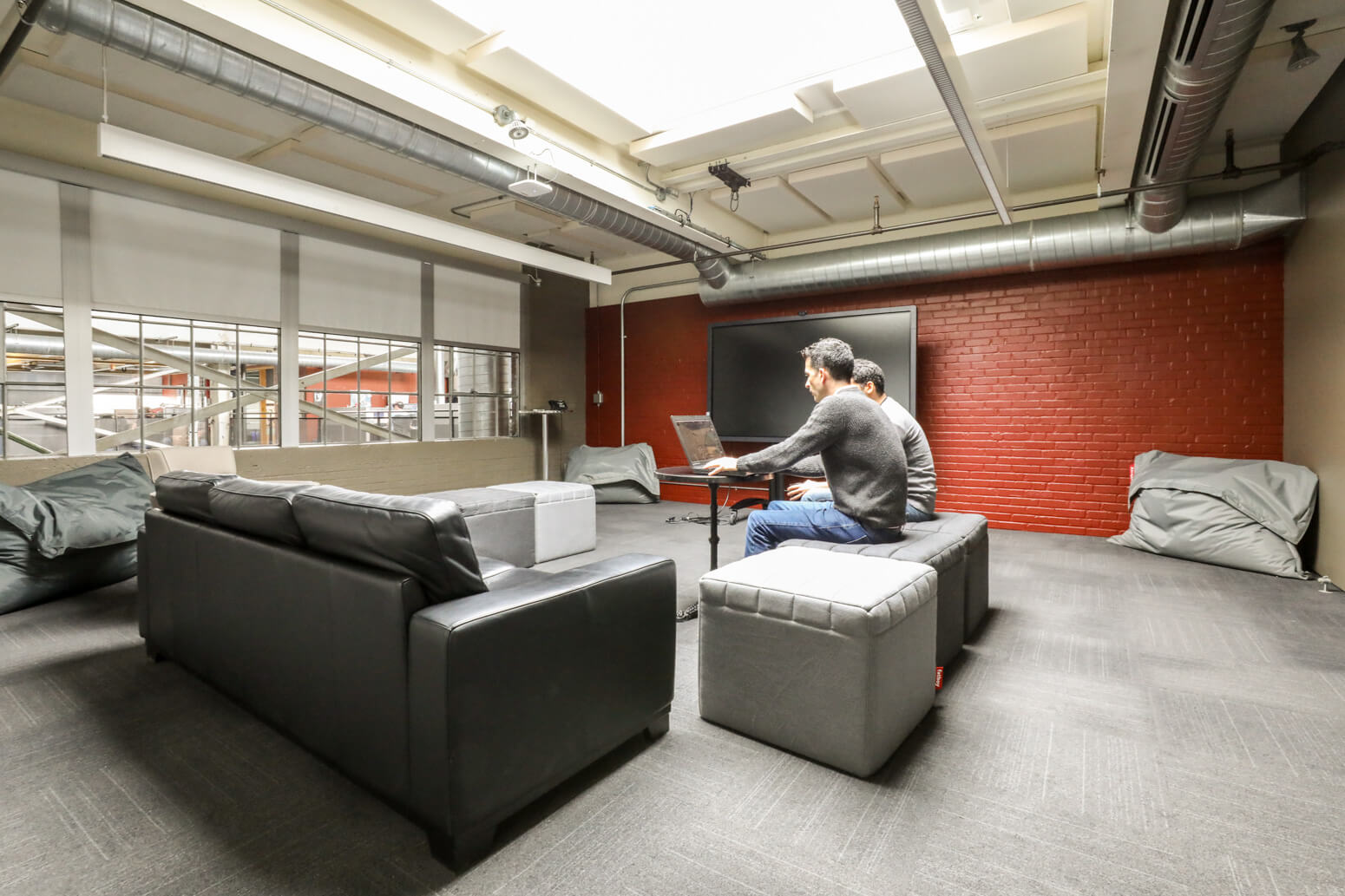 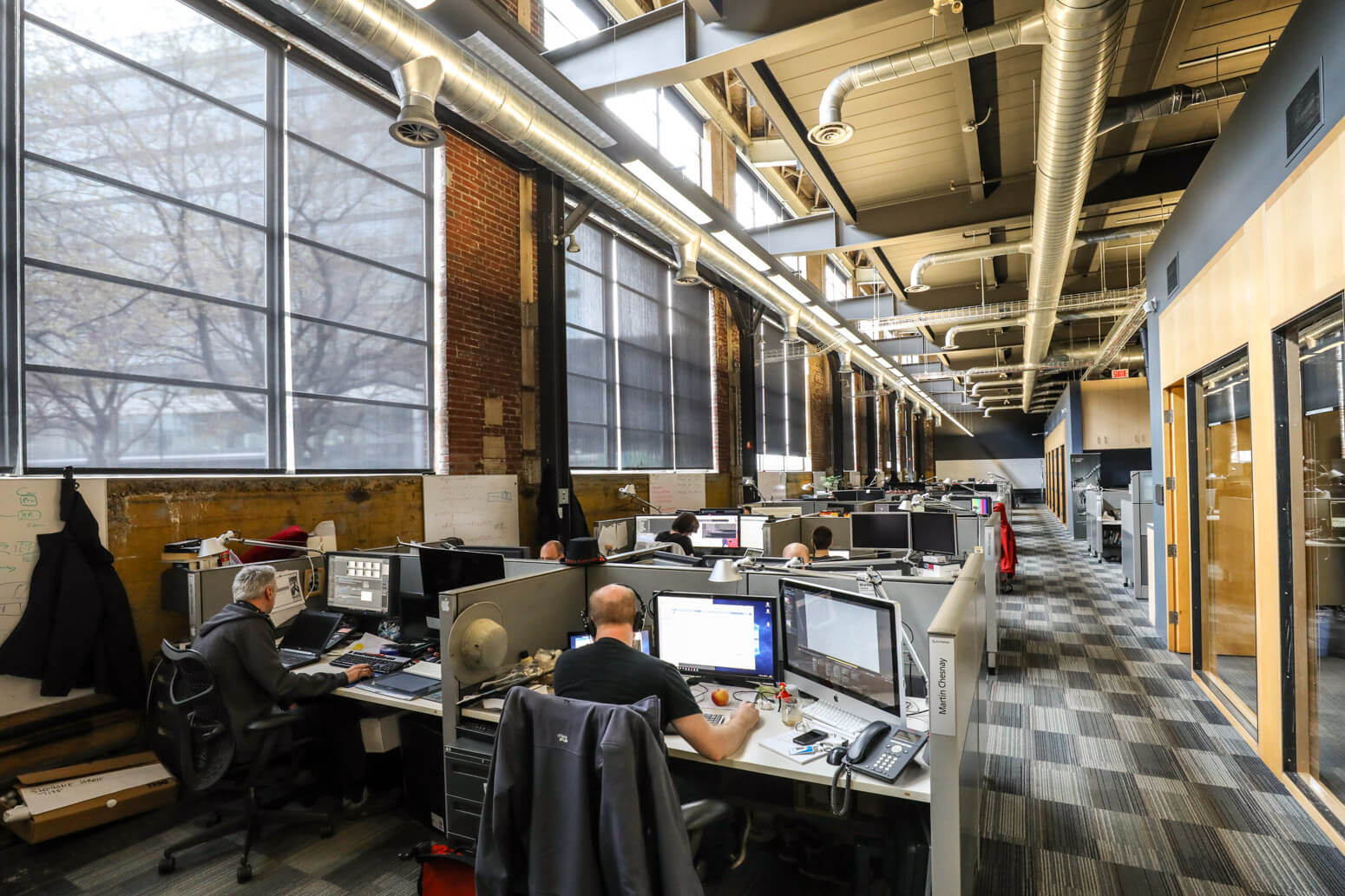 Autodesk Canada’s team can chow down on fresh fruit, Montréal bagels and coffee any way they like it. The office offers serious caffeine capabilities with professional coffee machines that can serve up cappuccinos, espressos, americanos, lattes or just your standard drip. Tea lovers also have their pick of 16 different types.

The neighbourhood offers up some of the city’s top restaurants and cafés while the city’s famous food trucks set up shop nearby in the summertime. 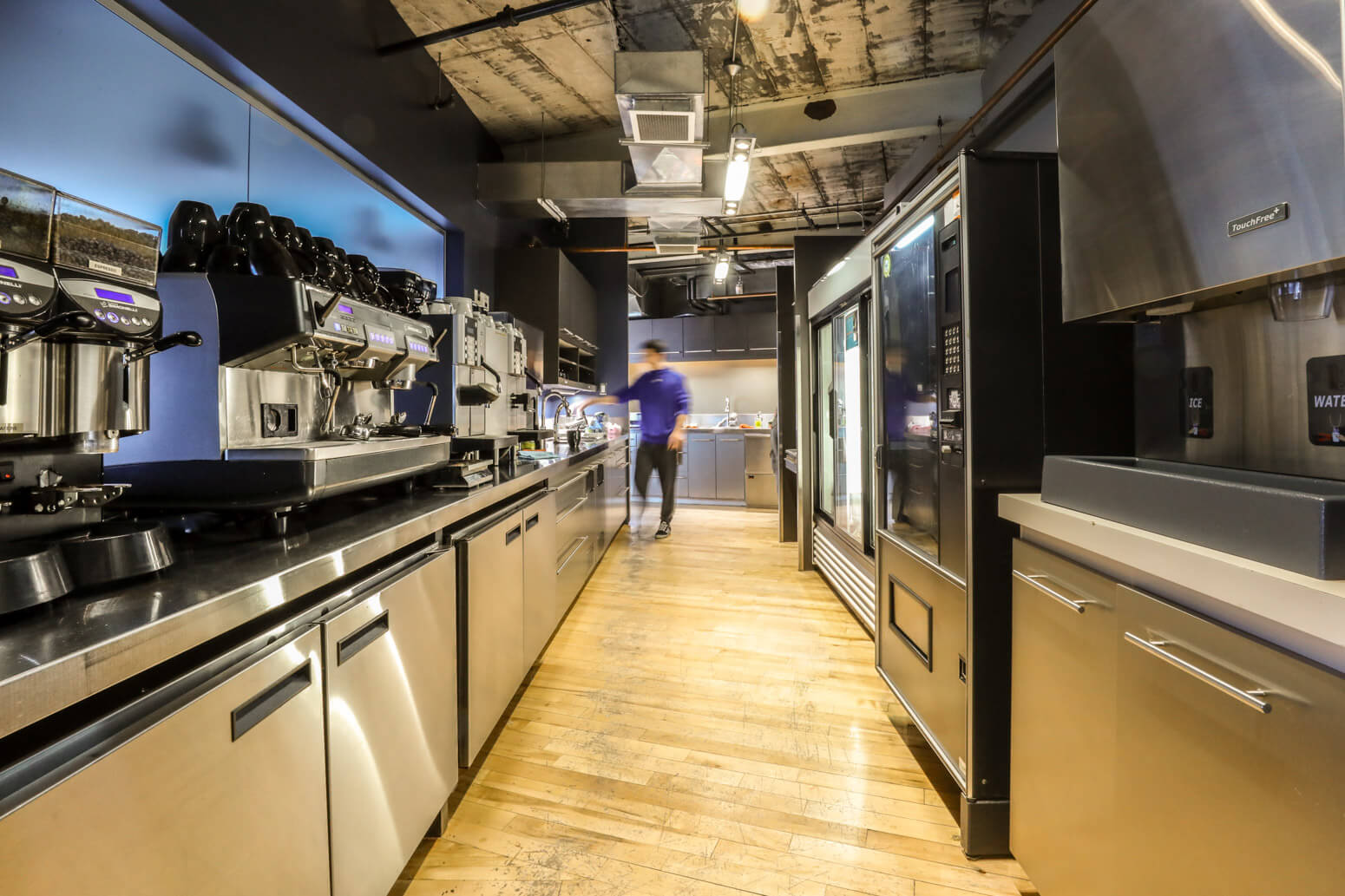 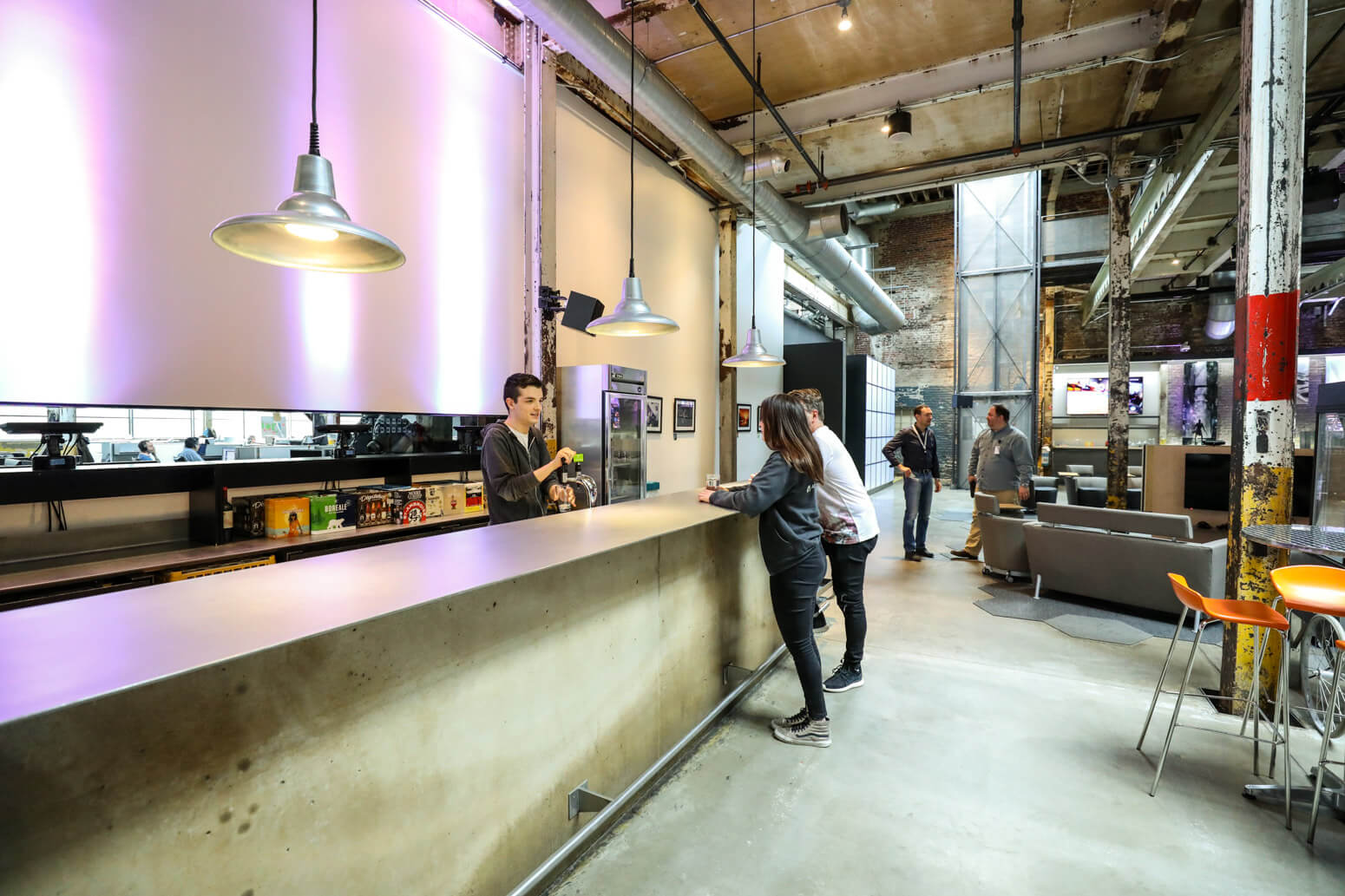 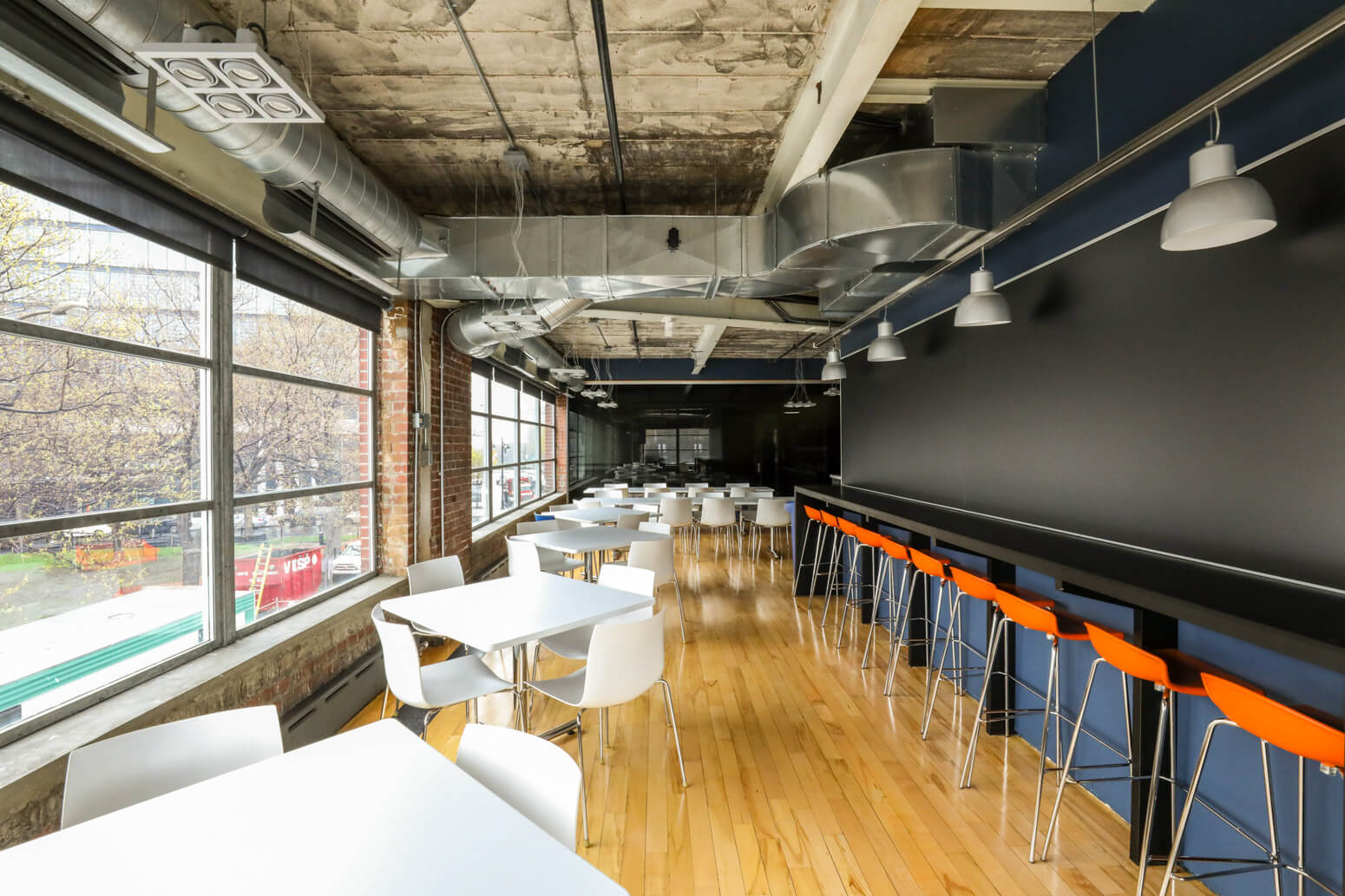 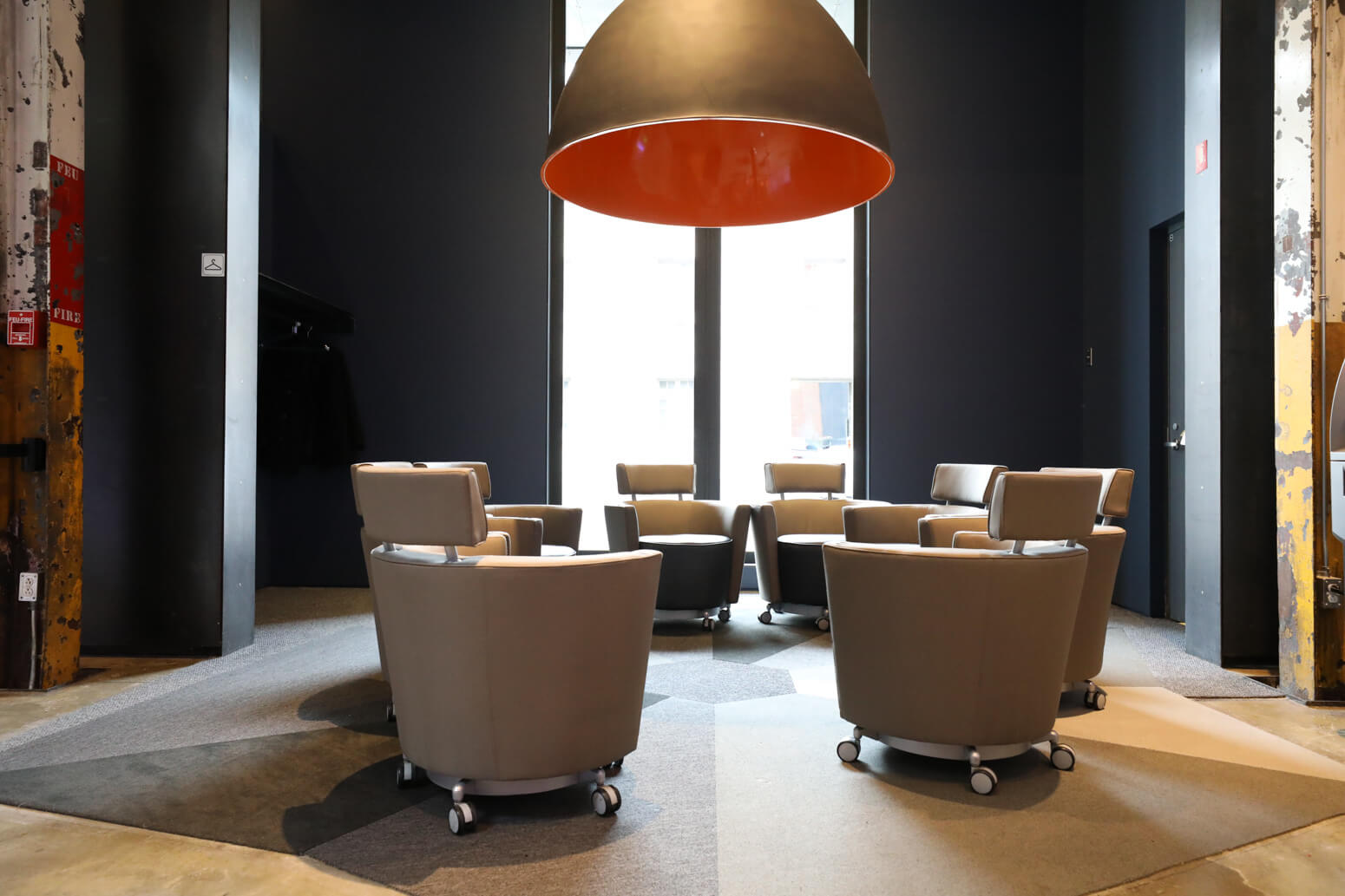 Autodesk’s workplace flexibility, generous time-off and wellbeing programs are some of the reasons they were called one of Canada’s Best Workplaces of 2017 and earned the title of one of Fortune’s Top Places To Work. 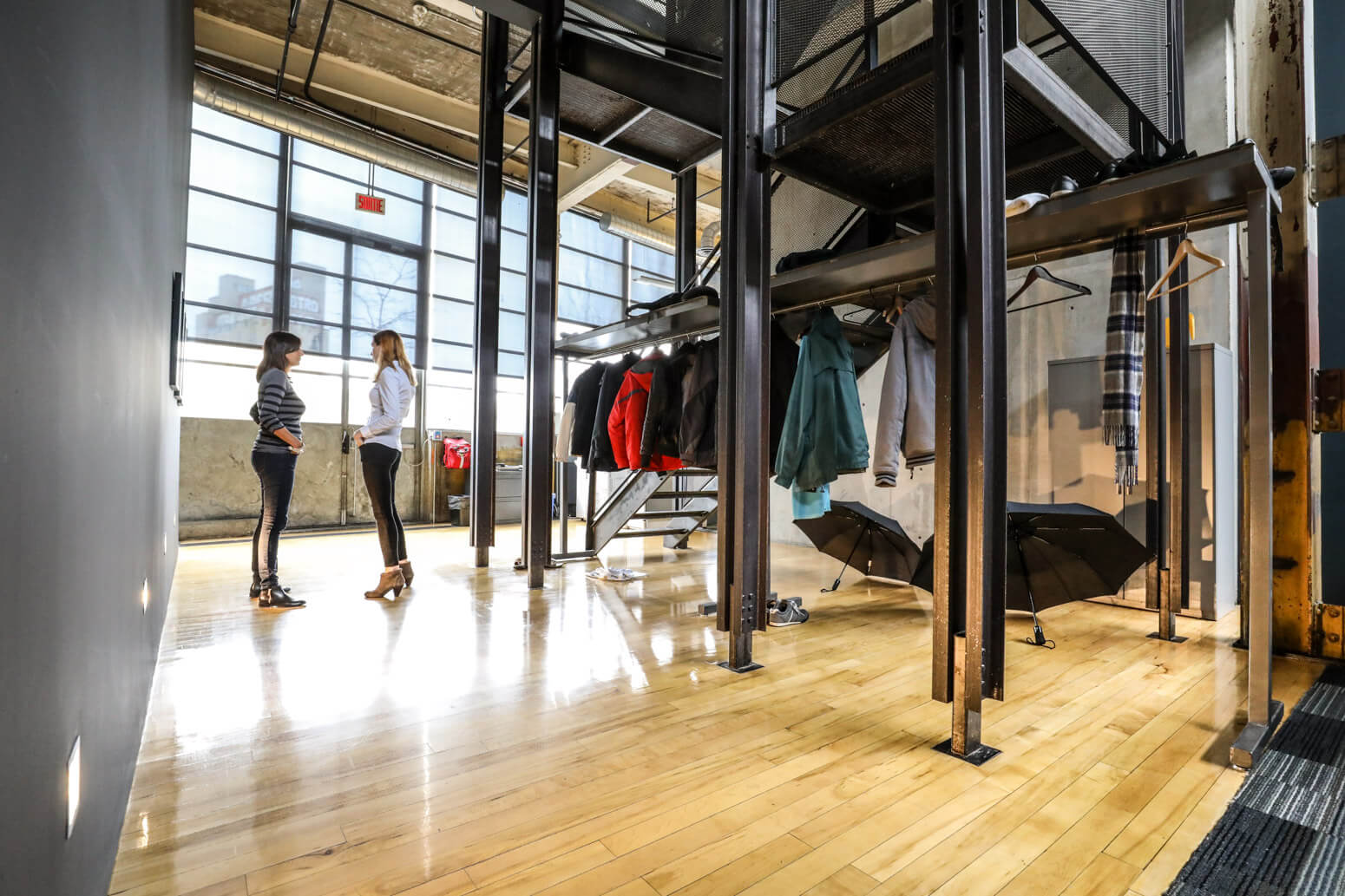 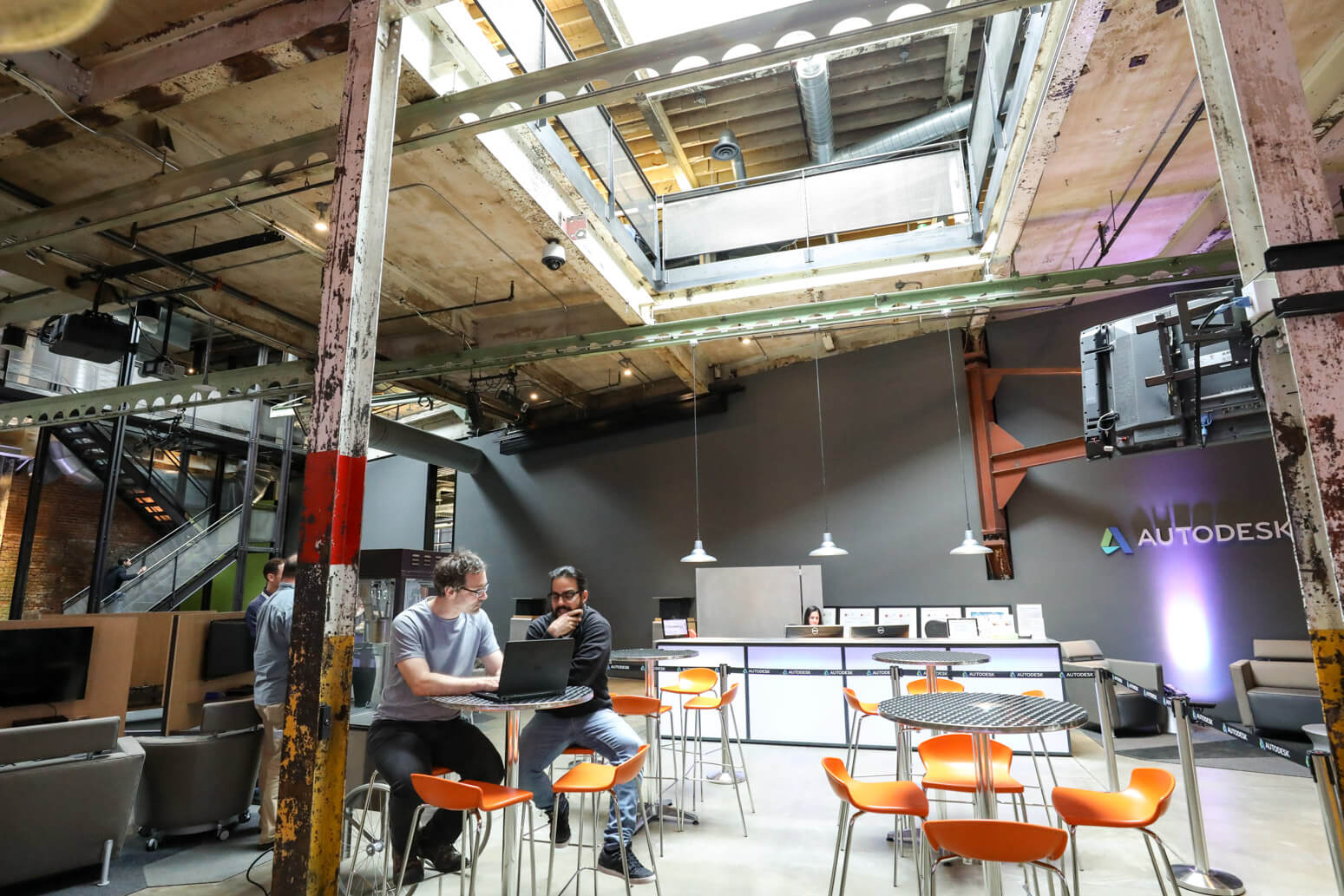 Employees receive competitive benefits of all types including an employee stock purchase program and 401K matching.

A former private garage was transformed into bike storage for employees. In fact, the entire company has a green commuting competition. Despite harsh Montréal winters, their team ranks one of the highest for commuter miles. 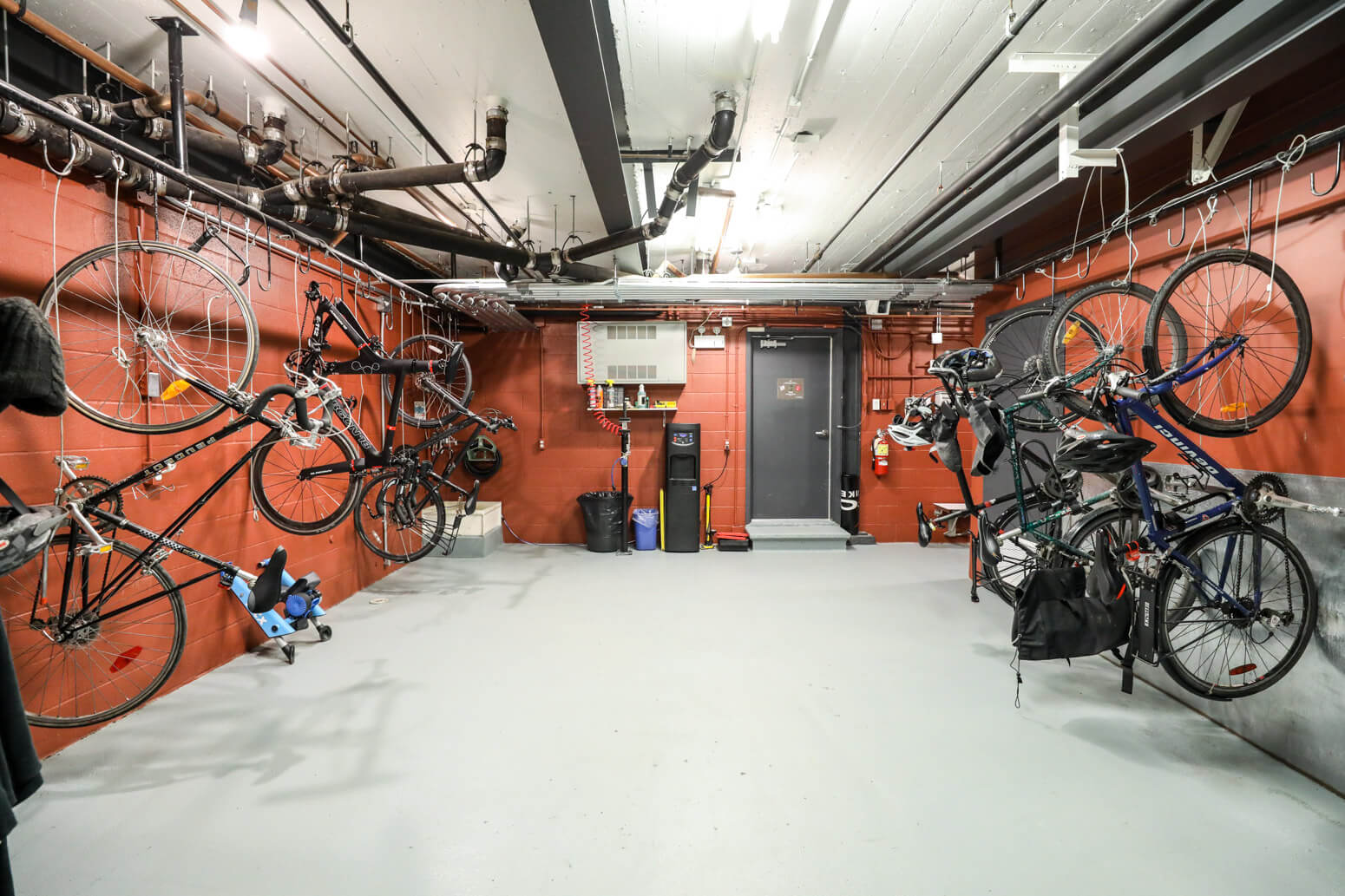 The company is a champion for volunteer work.  Autodesk provides employees paid time off to work in the community, whether it be for a charity or a non-profit initiative. The Montréal team often joins forces for a good cause; this past July they prepared over 100 meals for Dans La Rue, a charity for the city’s homeless youth and young adults.

With soaring ceilings, the lobby and its lounge area are the go-to spot for weekly team happy hours on Fridays and often host large corporate events. The installation of LED controlled lighting allows Autodesk to change the atmosphere of the space while honouring its historic past. 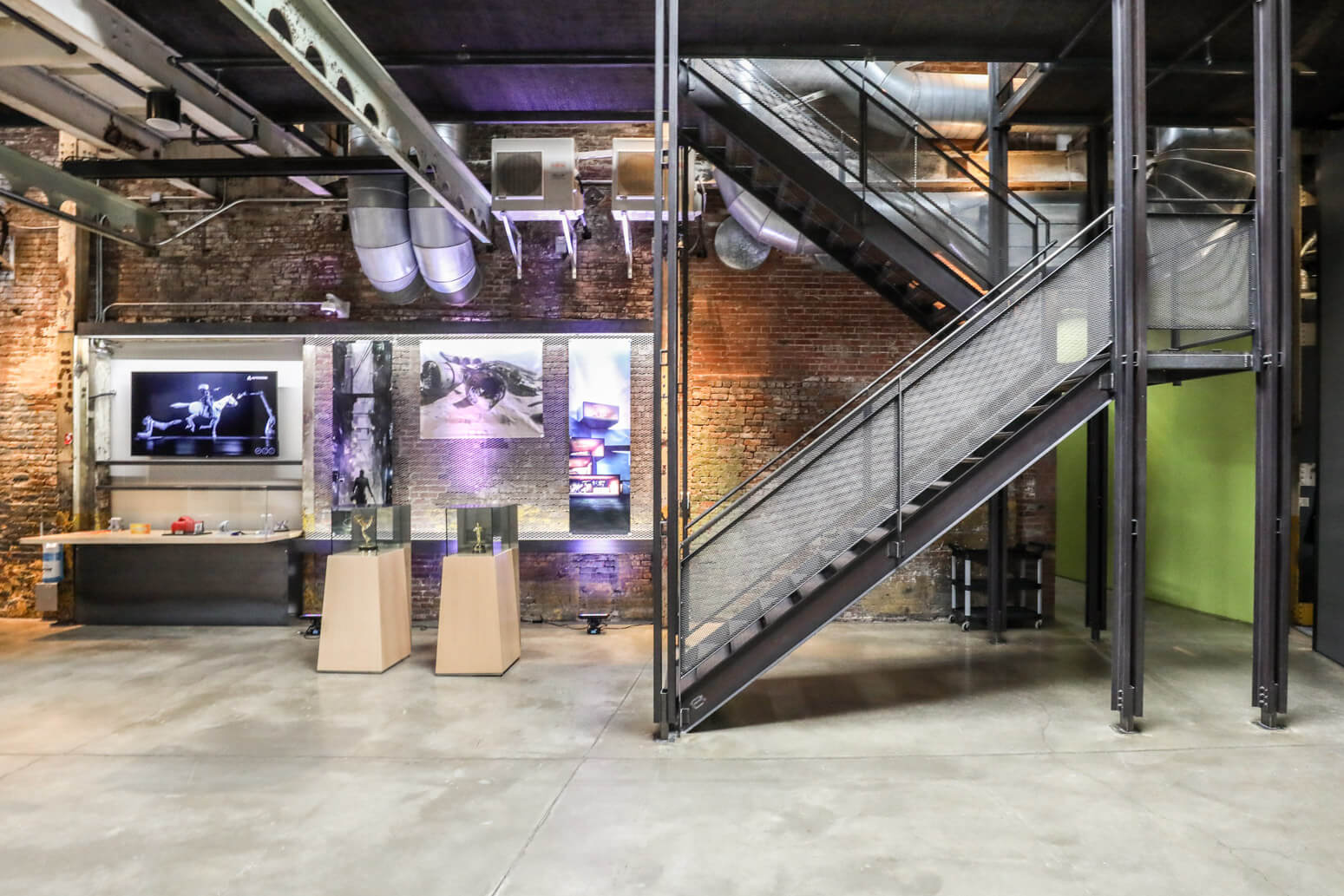 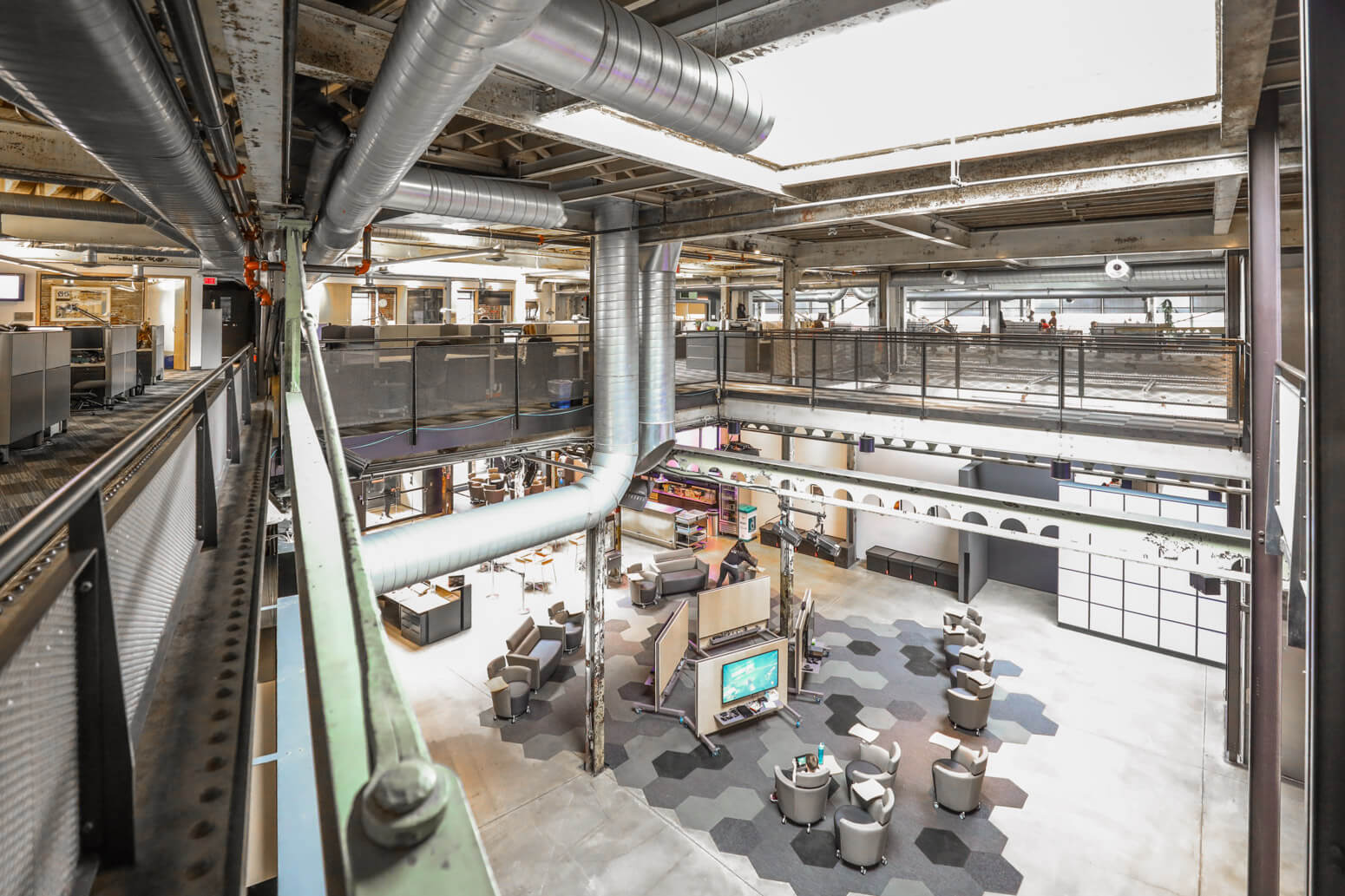 Autodesk has pulled off some noteworthy events too: a colourful Pride Party and Q&A with Academy Award-winning director James Cameron are just two of the events hosted in their space. The striking lobby has doubled as a venue for Autodesk’s Women in Engineering event and an annual Design Night.

The Montréal team also launched Tech Talks; a free community meet up that features presentations on a hot topics like designing with AI and 3D reality capture. 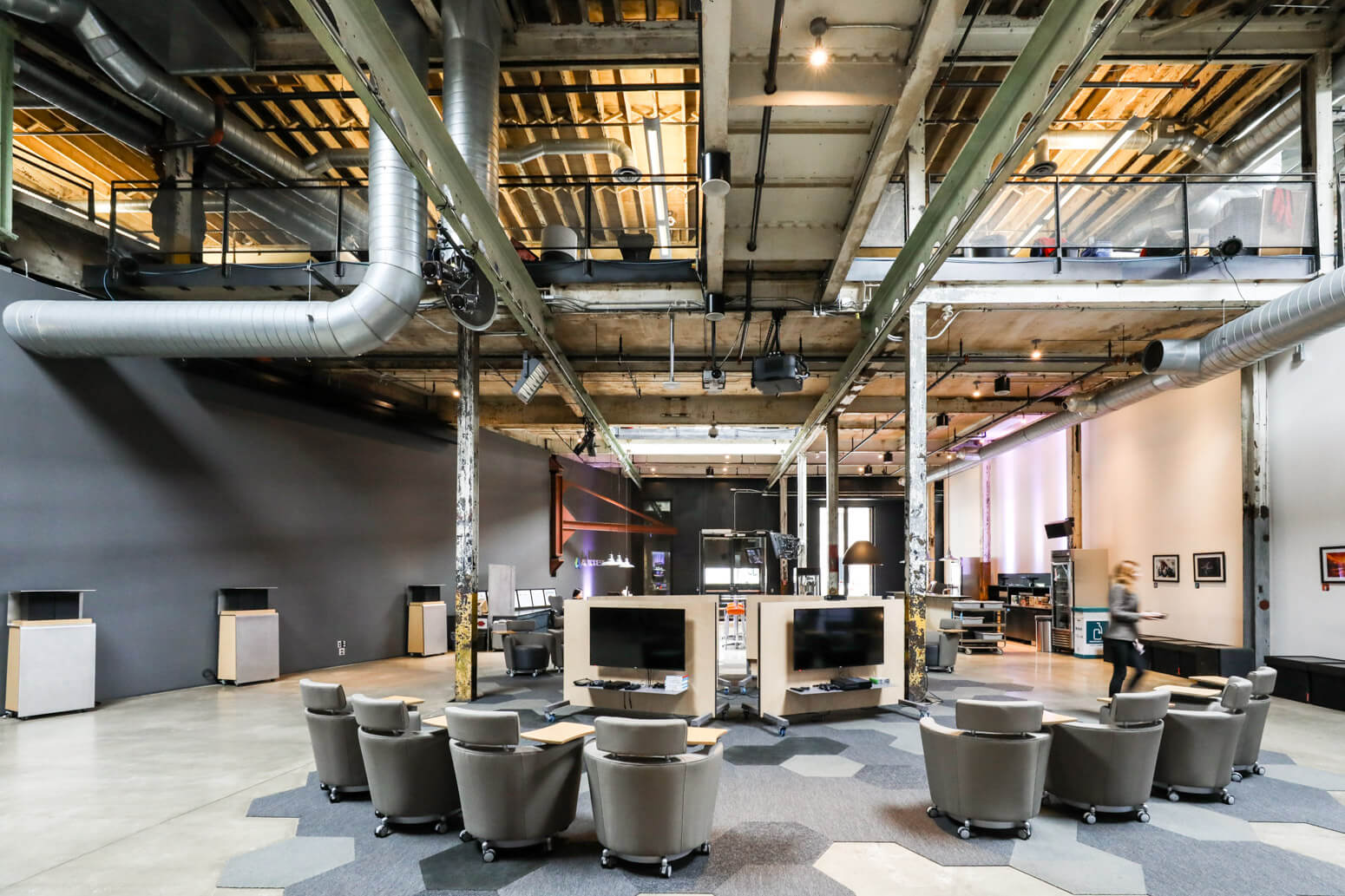 Autodesk is a big advocate of environmentally sustainable practices. In the Montréal office, the cafeteria stocks reusable dishes and cutlery, the kitchen is equipped with water-saving dishwashers, and all halogen lights now run on LED. 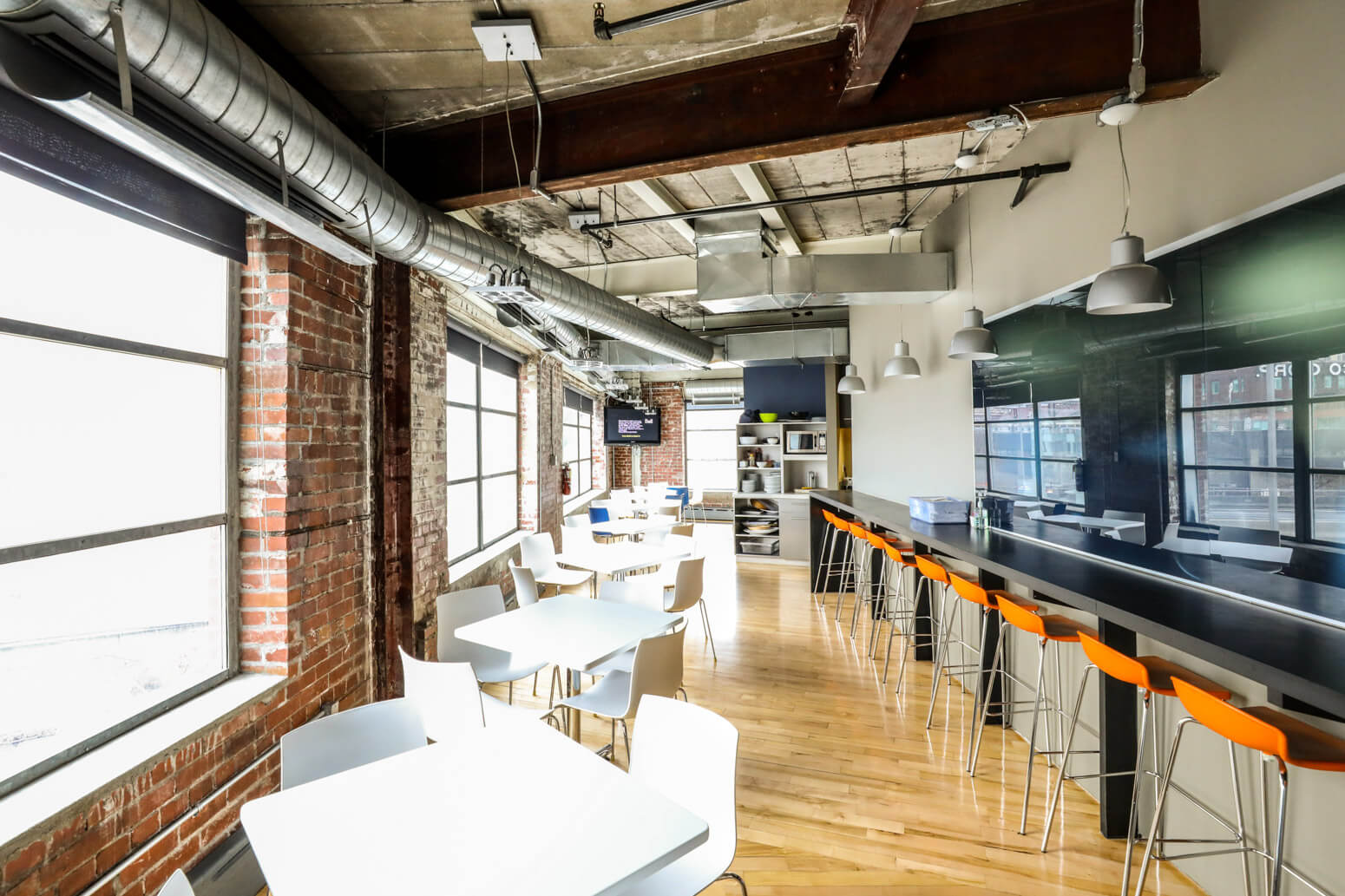 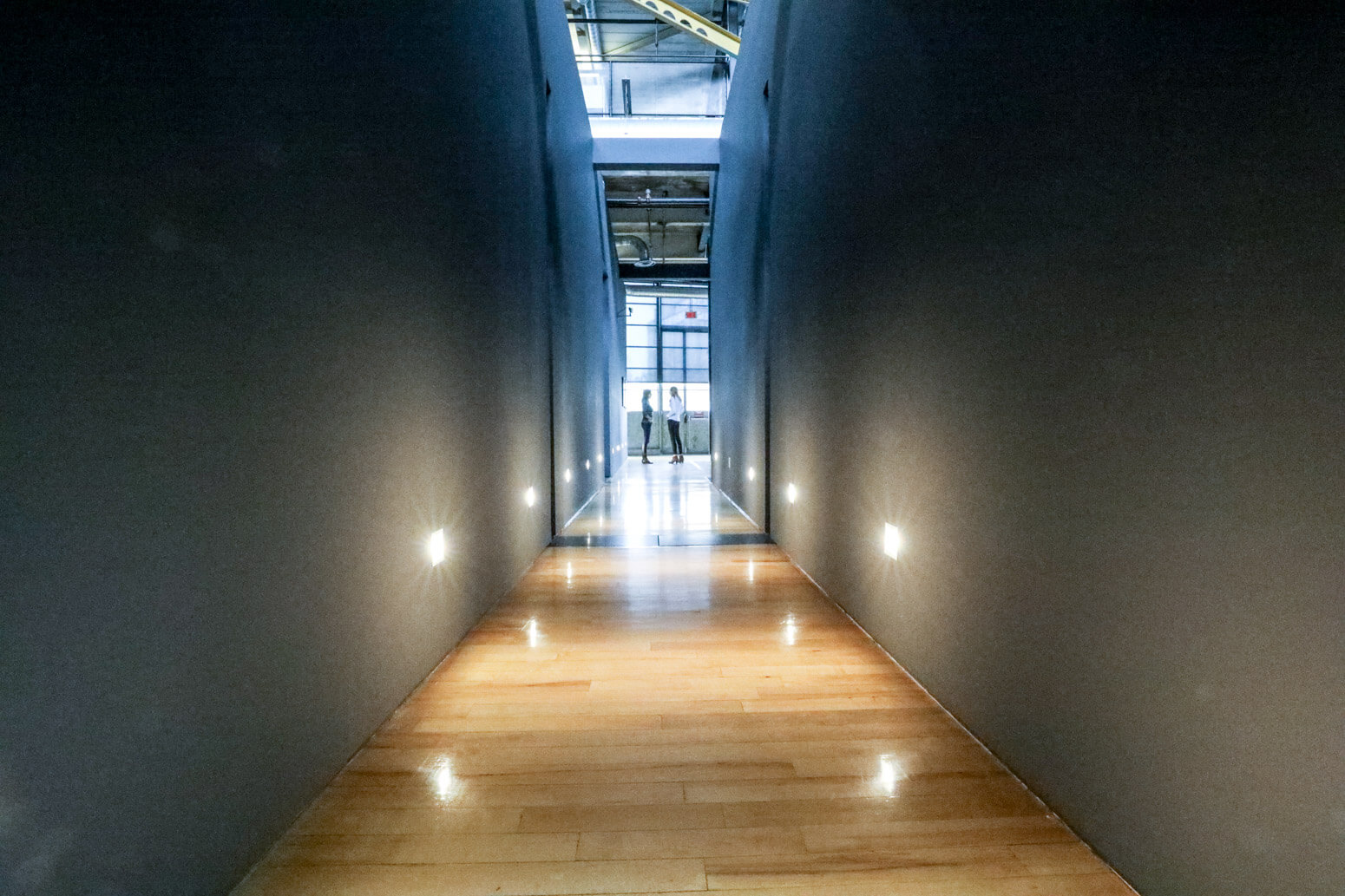 Once a year, the team throw on rubber gloves and head outside with a garbage bag in hand to pick up trash and collect recyclables from the nearby Canal Lachine. Autodesk also host e-waste drives every quarter.

Globally, over one in five of Autodesk’s facilities have obtained or are working toward earning a sustainable design certification, including LEED, SKA and GreenMark. 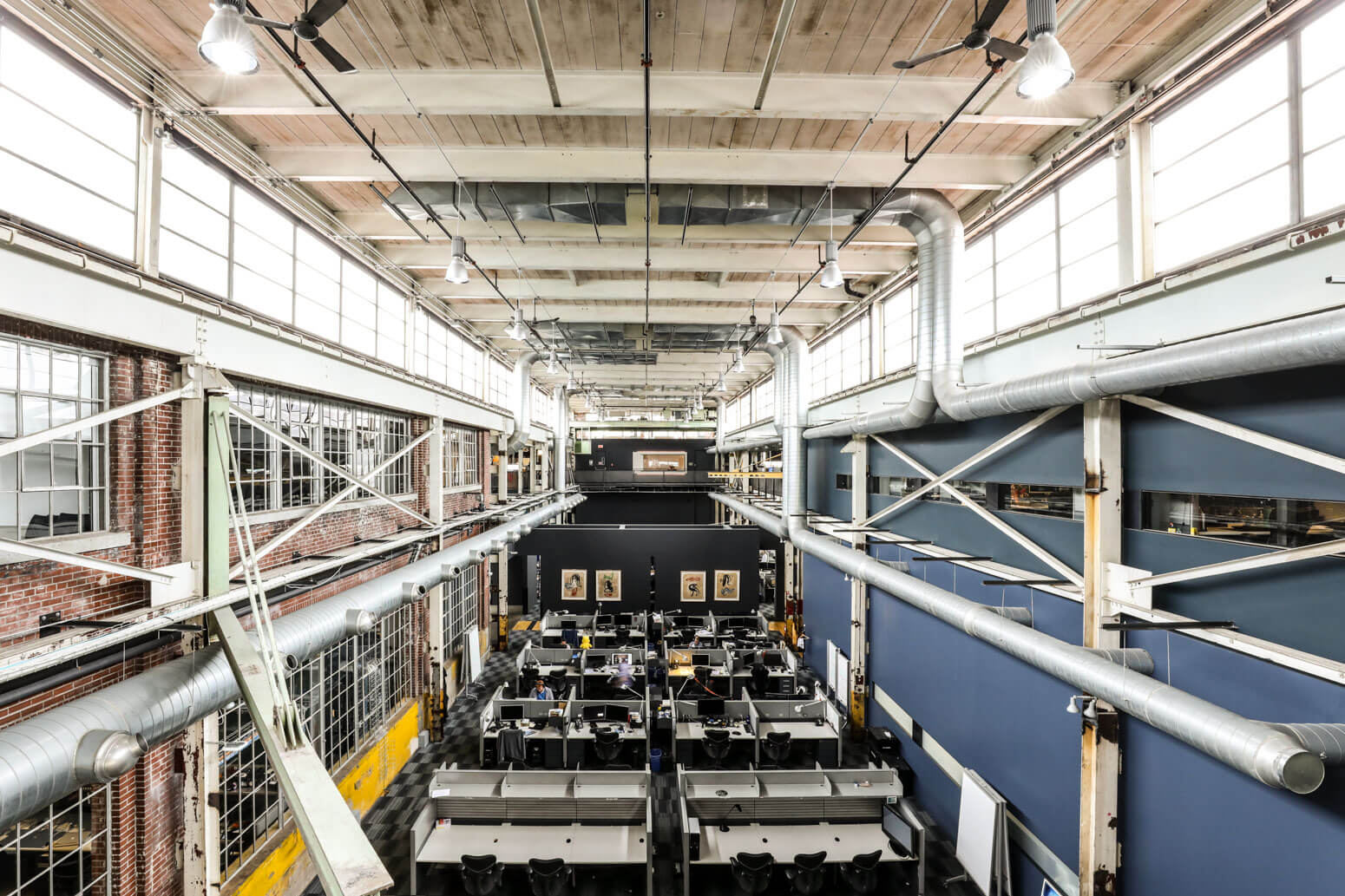 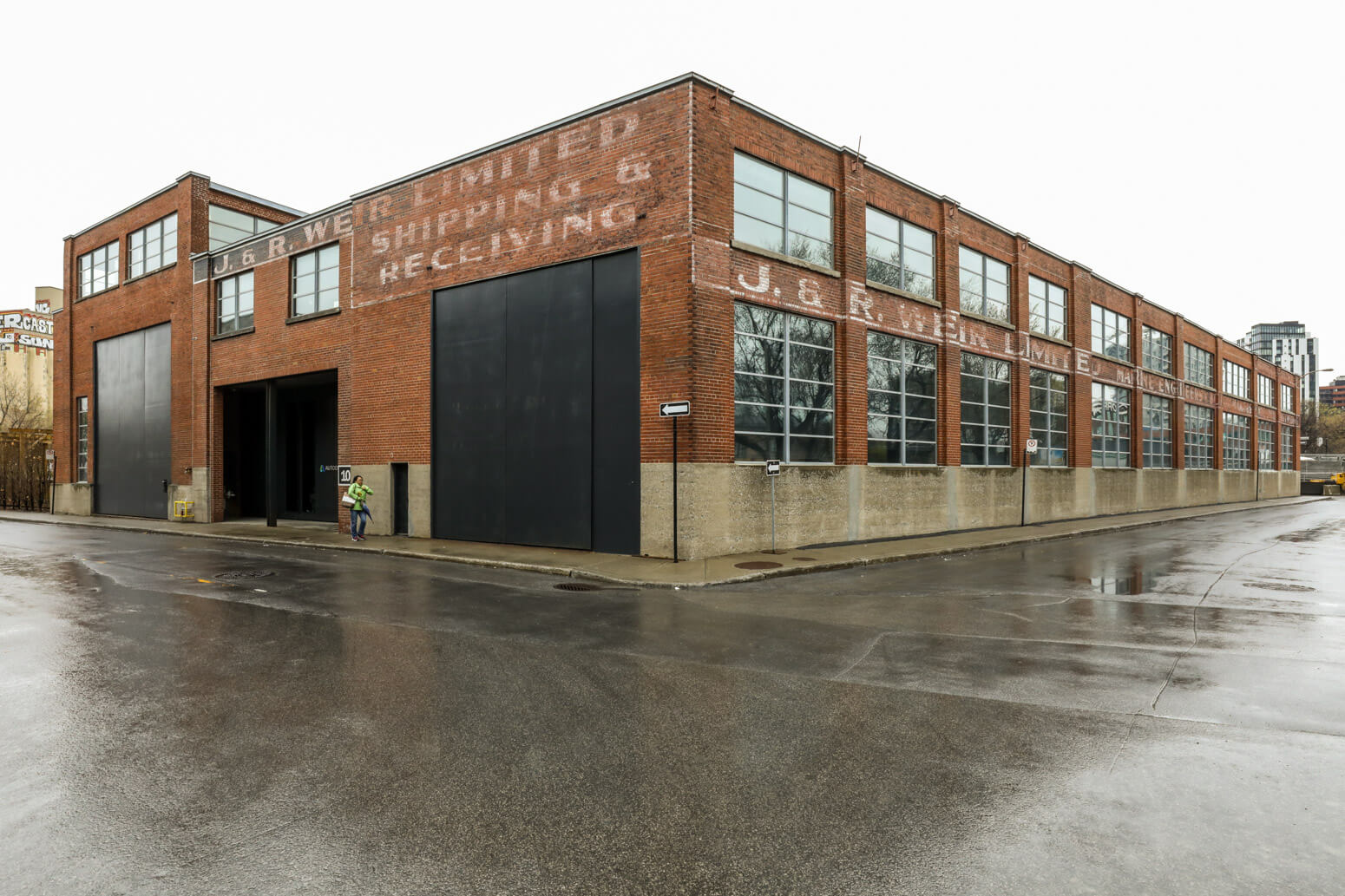