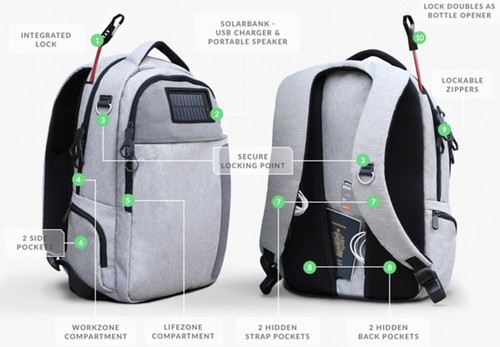 In the past six months alone, he’s spent time in Europe, Asia and the United States.

“My office is always on my shoulders,” he says.

That experience, Solgaard says, led him to develop a more modern backpack. Called the Lifepack, Solgaard’s design has a built-in lock and a solar-enabled battery pack – which can charge phones and doubles as a set of Bluetooth speakers.  Solgaard is currently raising money on Kickstarter to fund the launch.

“What I’ve found, is when you’re moving from place to place to place all the time, it’s so easy to lose your stuff, whether that’s your passport or your pens or whatever. I’m a disorganized person by nature, but by having systems in my life,” he says, “I never lose anything.”

It’s a philosophy that applies to the bag. Hidden pockets in the back can store credit cards and passports, while the main part of the bag is divided into two separate compartments – one for things like clothes, the other things like a laptop and notebooks.

That way, Solgaard says, even backpackers don’t have to worry about pulling out their underwear at a business meeting.

The idea, though, started with the lock. It’s something he says he’s been thinking about since he first started travelling in 2005.

But while the idea was floating around in his head, Solgaard says it didn’t come together until he was having coffee with friend in Barcelona and they didn’t even notice that her bag had been stolen until it was time to leave.

“I just thought, right, it’s time to actually make this happen and a lock isn’t enough, a lock is the start, really what you need is the entire package,” he says.

The lock itself isn’t just for locking the bag shut, it can also be used to lock the bag to something, the way you’d use a bike lock.

There are also the additional features – like the battery bank/speakers, which use a solar panel to stay charged.

The process of putting it all together involved “making really shitty prototypes really quickly,” he says, “and then throwing it out to friends.”

Getting other people involved was crucial, he says, he didn’t want to make a product that was just for himself.

This is Solgaard’s second Kickstarter campaign; in 2013, he raised over $50,000 to make a bike lock that can be stored inside the frame of a bike.

It was a learning experience, Solgaard says and he plans to put those lessons to use on this campaign. He says he’s more organized and has a better sense of what feedback he should take.