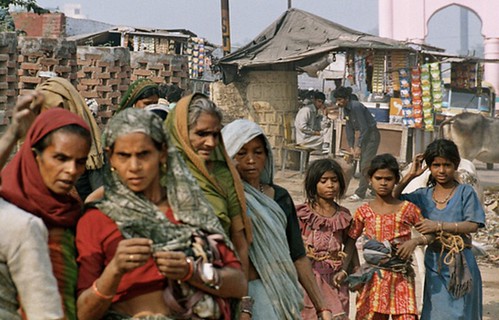 When it comes to India, most of the world thinks of the densely populated cities of Mumbai and Delhi. Images of the uber rich, skyscrapers, luxury cars set against a backdrop of extreme poverty come to mind.

Of the 1.2 billion Indian people, 700 million still do not have access to banking services. Yet it has been proven that banking services can immediately increase the living standards of the poor. People are able to save, get small loans to open businesses, get paid faster, free up time and more.

Though they don’t have bank accounts, you know what all those people have? Mobile phones—960 million of them. This is why we believe India will become the most banked country in the world by 2020.

1. Most people live an average of 8 hours away from a branch.

2. Setting up an account requires a lot of paperwork and can take weeks to months

3. The cost structures of traditional banks make it non-scalable to offer accounts to small depositors.

4. 90% of spending is done with micro-businesses (smaller than small businesses) where cash is preferred.

5. There is a massive cost to convert people from cash to banking; $15 per sign up and $15 to train. For businesses, $500 to install and train people on a terminal.

6. Personal finance happens in small increments which banks think are not worth it.

For us in the West, our regular checking accounts can run $15 per month for just basic services. This is because our infrastructure is not efficient and the banks need that to support the system. Given the low income of most Indians, this existing model is impossible to scale in the region.

Changes Are Creating a New Model

Now let’s get to why we should all bet big on India (and also South East Asian countries like Malaysia, Indonesia, Thailand, etc):

1. Each year 20 Million Indians enters the middle class, the equivalent of the adult population of Canada. This group is educated and open to new technologies and methods.

2. The Aadhaar Card is a system created by the Government that makes it extremely quick to identify people and thus vastly reducing the amount of paperwork needed to set up accounts.

3. Using retail outlets to offer services and educate customers leads to branchless banking. This is similar to how retail outlets became points of connection for mobile operators in India.

4. Banks haven’t examined their costs infrastructure like mobile operators did. There are huge opportunities for cost reductions, therefore making it profitable to service small depositors.

5. Government financial disbursements are going electronic. This will force people to go electronic too.

In addition to the above trends, the biggest thing to make banking explode in India is Mobile Operators. Kenya’s M-Pesa showed that mobile operators can become banks. Kenya, a population of 40 million people, went from three million bank accounts in 2007 to 20 million in five years.

In August, the Reserve Bank of India granted 11 new banking licenses, and two of them were mobile operators: Airtel and Vodaphone. With both having banking licenses, there will be a huge impact both within India and outside.

As an example, let’s look at Remittance. India is the number one country in the world for remittance. $70 billion every year is sent from migrant workers back to their loved ones. Imagine Scotiabank telling their Indo-Canadian customers that they can now send money right to their families at affordable rates and speed. Instead of going to a Western Union, they can log on to their account and send the funds right to their relative’s phone in India.

Before the receiver could receive it to their phone but then they had to find a way to off board the money to use it in a real setting. Now they have the funds on hand and can use it to pay for things directly without needing to convert airtime. In addition, small Indian entrepreneurs who make products can sell them internationally and have funds sent right to their Airtel Bank. There is no need to go through intermediaries. Just think what Etsy in India might look like.

Without legacy systems in place, the Asian countries have already leapfrogged the west in mobile use and now they will do the same with innovative banking technologies. Mobile operators as banks is just the start, mobile wallets will explode and then comes distributed ledgers and new networks. for the brave, bold, and stubborn there are many reasons not to be deterred by the short-term challenges in developing nations.