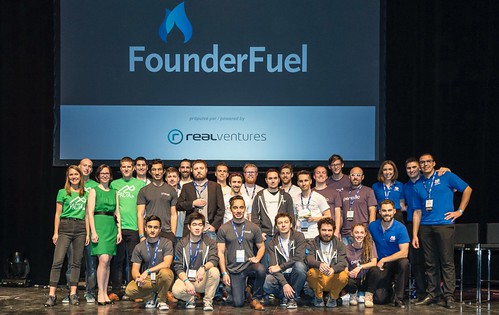 Mega Demo Day, on Dec. 2, drew 1,500 people to watch pitches from 12 startups, as those startups graduated from one of Montreal’s most established accelerator programs and from one of its newest.

For FounderFuel, it was the program’s eighth demo day in five years. For InnoCité, a new accelerator program launched by the City of Montreal over the summer, it was the first.

It was a spirit of collaboration that brought the two demo days together, says John Stokes, a general partner at Real Ventures. The venture capital fund runs the FounderFuel program and is an investor in InnoCité.

“The success of accelerator programs in general is often about the collaboration between all the different companies that come together, in addition to all the support from the mentors,” says Stokes. “That idea of collaboration that FounderFuel instills in its teams, we also want to instil between ourselves and other accelerators.”

InnoCité has a very specific mission, to encourage startups that will help cities innovate quickly and provide 21st century services to their citizens, Béatrice Couture, the general director of the program, told the event audience.

But that mission hasn’t limited the types of companies in the program.

Among the five companies pitching was Ubios, which has developed a modular smart home product that replaces a regular light switch or baseboard thermostat.

Initially, the product is just designed to prevent water leaks, though other modules are intended to follow.bWater leaks are responsible for over 50 per cent of all home insurance claims, says the company’s founder Mathieu Lachaîne.

The startup has already launched a paid pilot program in Mont-Tremblant, a ski resort town near Montreal, that will see its customers pay lower insurance premiums. It also plans to raise money through an equity crowdfunding round.

The companies graduating from FounderFuel were also a diverse group, ranging from a social network to a media player for virtual reality devices. Stokes says it’s a sign that while Montreal’s tech community is doing well, it’s now about more than just tech.

“What we saw today, though, was a broadening of tech, it’s not so much tech companies or the tech economy, it’s now the economy,” says Stokes. “The real world is becoming the tech scene.”

The FounderFuel graduates pitching were: