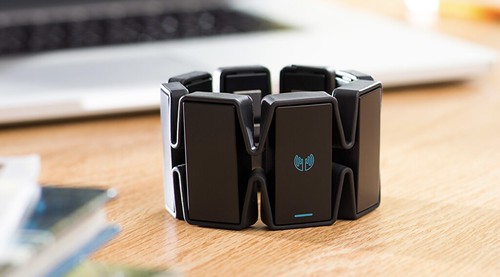 For years, BlackBerry was the anchor of the Kitchener-Waterloo tech industry, but as the former giant continues to shed staff, local startups are looking to hire that talent.

“There are plenty of startups here in the Waterloo region that are hiring,” says Stephen Lake, the co-founder and CEO of Thalmic Labs. “Everyone is looking for talented people.”

The maker of the Myo gesture-controlled armband is just one many Waterloo-area startups that’s looking to hire people who have been recently laid-off by BlackBerry, Lake says.

“We’re hiring for around 25 roles at the moment, they span a pretty wide variety of departments but are largely R&D and engineering-based,” he says.

Lake says he worries that people who are laid-off by BlackBerry will look for jobs at large tech companies outside the region, or even outside the country, that’s why he’s actively recruiting and why other companies in the region are doing the same.

“We’ve always had that concern over so-called ‘brain-drain’ and so much of the talent seems to gravitate outside the country,” he says.

If that happens, Lake says, fast-growing local companies will face a shortage of talent.

“It’s important to make sure that we retain that sort of talent,” he says. “Because ultimately it’s that calibre of people who are going to create economic growth for the region and the country and create new companies and new jobs and help scale and grow the companies that are existing today.”

There’s no doubt that BlackBerry now plays a smaller role in Waterloo’s economy than it did when it was Research in Motion. At one time, it employed over 10,000 people in the region. Now, it’s around a quarter of that.

That history “put the region on the map and actually made it what it is today, this hub of technology,” Lake says.

But Waterloo’s tech ecosystem has grown a lot bigger and more diverse, he says.

“Especially in the past five years, we’ve seen this explosion of companies,” he says. “We have over 1,800 startup technology companies now in the region.”

While BlackBerry, at its hight, was an inspiration for entrepreneurs like Lake, he says its decline is more bittersweet than sad.

“It’s actually been, in some ways, positive for the community. This talent has helped a new generation of other companies grow and scale,” Lake. “Now that you’re getting this talent going out and into other companies in the region, hopefully, that leads to even more large, successful companies. It’s obviously a tough thing, but I think there is this silver lining there.”