Great technology is all about simplifying our lives. But every once in a while, a new company or innovation comes around that doesn’t only make life easier—it fundamentally changes how humanity and technology interact with one another.

The Canadian Innovation Awards’ Breakthrough Technology category recognizes companies that look beyond using computers and machinery to solve problems—instead, these organizations redefine the problem by using cutting-edge methods to systematically change the way we think about making life easier in the first place.

Finding new ways to utilize medicine is the future; 3D printing is the future. But what about combining both? Vancouver’s Aspect Biosystems develops and commercializes advanced printing technology capable of producing human tissue.

Aspect Biosystems has the vision of enabling the creation of human tissues on-demand. This is a huge task, and one that sounds so futuristic it’s almost unrealistic in its goals. But this medtech company is well on its way to developing some of the most profound advancements in medicine the sector has ever seen.

“The team at Aspect is innovating at the cutting-edge of medicine, engineering, and business and is driven to ultimately deliver meaningful impact on the lives of patients.“

There are countless ways 3D printed human tissue can impact the medical world. From developing and testing medicine without the use of animals all the way to knowing how a patient will react to prescriptions before actually administering them, Aspect Biosystems is looking beyond repairing the body; they’re repairing the medical system.

Aspect Biosystems was chosen as one of Canada’s most innovative companies in 2017 while also being chosen as Metabridge’s most promising startup of the year. The company also raised their first round of institutionally-led financing, capping off a busy and inspirational year.

“Everyone Deserves To See.” It’s those four simple and noble words that Toronto’s eSight lives by. The accessible tech company designs, produces and provides wearables to give the vision-impaired a chance to see once more.

There are over 250 million people in the world with some degree of visual impairment. eSight wants to empower every single one of them to be fully independent and mobile in the workplace and school by engaging in activities of daily living.

“We have proudly launched a pledge to Make Blindness History by 2020 as we aspire to bring the gift of sight to more than 50 million individuals living with vision loss. In 2017, we helped many individuals with vision loss see again, and are looking forward to furthering our mission, that Everyone Deserves To See.”

eSight’s glasses are the only clinically-validated wearables of their kind. They record high-definition video and use magnification, contrast and proprietary algorithms to enhance the images in front of the wearer and turn them into video with near-to-eye OLED displays and almost no delay.

The last calendar year saw eSight release their eSight 3 model and land on the incredibly coveted Top 25 Inventions of 2017 list by TIME Magazine. The company expanded their product into Europe and introduced their “Make Blindness History” pledge to eradicate blindness by 2020. Legally blind guides wearing the eSight 3 even acted as guides for the SingularityU Summit in Toronto, showing attendees around the space.

Cars have become a staple of modern society. From weekend warrior excursions to morning commutes, a good portion of the world relies on four wheels to contribute to society and the economy. Mojio is on a mission to connect every owner to their car with the best end-to-end telematics solution on the market.

Mojio’s complete offering consists of the Vancouver company’s cloud-based open platform, a white-label app and a cellular OBD-II device. Once you have all the required components, almost anyone with a car built after 1996 can turn their ride into a connected vehicle. Users can take advantage of in-car wifi, safety updates, and in-car diagnostics.

“With a Mojio-powered solution, drivers, families and small businesses can access previously unavailable, actionable data that empowers smarter decision making around family safety, driving behavior and vehicle maintenance, and benefit from a hassle-free Wi-Fi hotspot that doesn’t drain your smartphone.”

With more than five billion miles worth of driving data already collected, and representation from over 70 car manufacturers and 5,000 models, Mojio has a solid data set to work with. The company’s goal is to use that information to make vehicle refinements quicker and more targeted, improve traffic monitoring and management, and make urban planning as intelligent as possible. With these gains, driver safety and behaviour naturally grows as well.

Mojio’s 2017 was earmarked with massive partnerships and company announcements. The connected car platform added partnerships with Rogers and Bell to their existing agreement with TELUS, meaning that nine out of 10 Canadians can access their platform. Mojio also locked in a $30 million funding round to expand globally, though they already have partnerships with international entities like Deutsche Telekom. 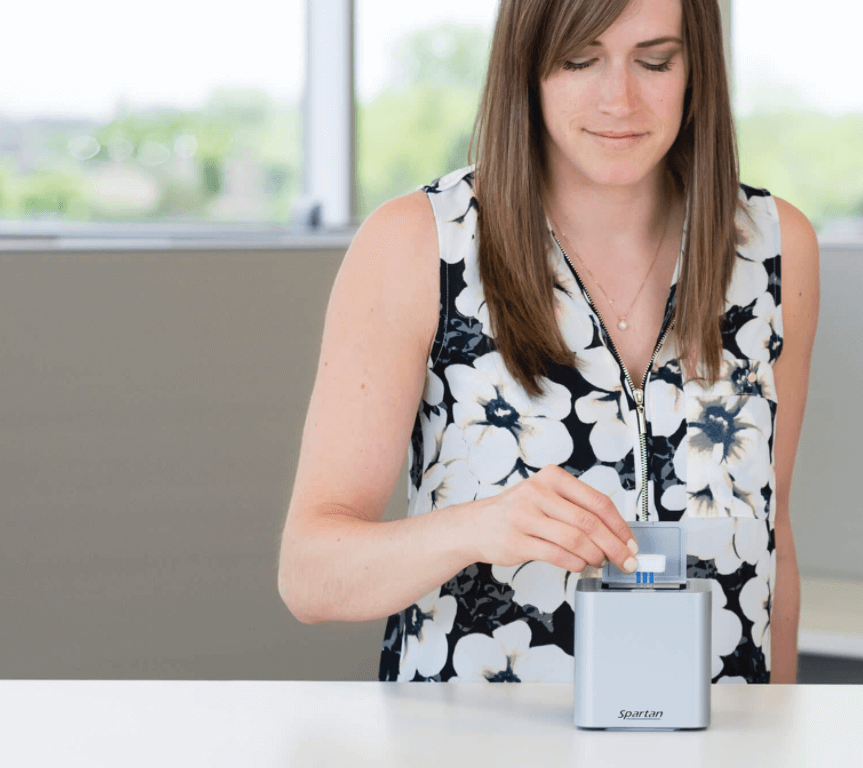 Understanding genetics and what makes up the human body is the key to bringing medicine into the next generation. Spartan Bioscience wants to do to DNA what Apple and the iPhone did to accessing information instantly, and they’re right on the way.

The Spartan Cube is the Ottawa-based Spartan Bioscience’s flagship device, and it is DNA testing on-demand. It is the world’s smallest molecular diagnostic device, fitting in the palm of a hand and enabling testing for many different kinds of information.

“Spartan is honoured to be nominated for the Canadian Innovation Awards. For 12 years, we have worked to bring the power of DNA testing to everyone. Now, with the Spartan Cube, the world’s smallest DNA analyzer, our vision is becoming a reality. We are excited to see the innovations that the Spartan Cube will enable for years to come.”

If the Spartan Cube realizes even just a fraction of its possibilities, it has the chance to spawn entire industries from its breakthrough. Patients can perform a localized DNA test with the cube at a doctor’s office then receive a specialized prescription avoiding the side effects they are most likely to incur. In fact, the Spartan Cube is the first ever DNA test to receive Health Canada approval for use in pharmacies.

The device can also be used to test for the presence of diseases. Recently, the Spartan Cube was utilized to test for Legionella bacteria in buildings with single-use DNA cartridges. The tests took 45 minutes—much quicker than the normal week-long turnaround traditional tests take. These are just a few examples of what on-demand DNA analyzing is capable of, and Spartan’s goal of enabling other companies to make their own Cube-compatible DNA tests will only lead to more innovation in the years to come.

Which of these world-changing companies do you believe should win the 2017 Canadian Innovation Awards Breakthrough Technology category? Make sure you vote for your favourites before February 2 at midnight to have your say in which companies should win.