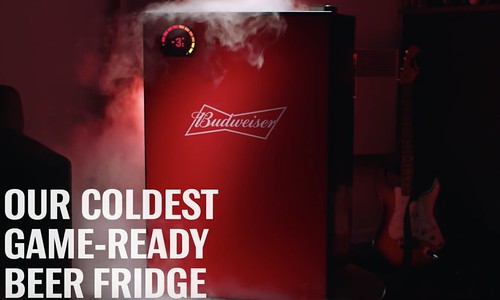 The King of Beers has built a smart fridge that connects to your smartphone. You can get push notified when a beer is removed or added to the fridge (great to catch your roommate in the act of stealing your beer!), when your beers achieve optimal temperature (minus three degrees Celsius, according to Budweiser), and when it’s time to restock. It can even let you know when your favourite team scores a goal.

The beer fridge may sound to some like just another viral gimmick from Bud’s clever marketing team, but it’s actually a product of Budweiser’s Goal Lab, a thinktank of innovators who create and test experimental innovations. It’s an innovation-driven approach to building new things, not unlike the process most startups go through.

“At Budweiser, we’re big fans of hockey goals. We can’t get enough,” the company says. “That’s why we created the Budweiser Goal Lab, to test and create experimental innovations that maximize goals and the celebrations surrounding them.”

Other innovations from Budweiser’s Goal Labs include exoskeleton shoulder pads that boost goal-scoring power, hydraulic-powered arena seats that automatically do the perfect “wave,” and a blimp-sized flying goal light.

And while those inventions can’t (yet) be bought, the BUD-e Fridge is real: it can be acquired for a modest $500.