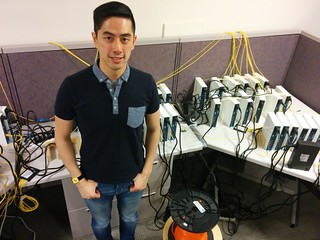 Engineer turned lawyer Byron Thom was working at a big Toronto law firm when an entrepreneur from Vancouver called. Word had gotten out about Byron’s experience in technology and law, and friends and referrals were regularly calling about new and growing ventures.

Entrepreneur Pook-Ping Yao, wanted advice on his start-up. After hearing what Byron had to say, he quickly asked him to join his company.

“I had to decide, do I stay in Toronto and work towards a partnership or do I take a gamble and move back to Vancouver to join this new and exciting venture?” Byron said. “I didn’t want to live with regrets or someday wonder what-ifs. I wanted to try the dream, to see if I could make it work.”

Now three years in, Optigo Networks is becoming a leader in connecting and protecting the Internet of Things in commercial buildings. Layered on top of a robust networking platform, Optigo’s integrated analytics and security engine ensures building systems are protected and operate trouble-free.

It didn’t start that way though. The first month he moved back to Vancouver, he and Ping, now CEO of Optigo Networks, set up an office above a recycling center in New West, and did all the things that start-ups are told they have to do. They mopped floors, cleaned bathrooms and nabbed furniture from other companies that were moving up and out.

After six months, the growing secure networking company moved into a business incubator – Discovery Parks – on Great Northern Way, where they found a booming entrepreneurial community and a deep pool of support from mentors, networks and programs, such as the BCIC-New Ventures Competition, Generator Program, and VentureLabs supported by the BC Venture Acceleration Program (BCIC).

“There was this opportunity to connect and work with other companies that were leaders in their space and get help from them,” Byron said. “Incubators are great, as it gave us the opportunities to bounce ideas off each other, and to make introductions to other companies and to different investors.”

“There is so much cross pollination and interconnectedness in Vancouver,” he said. “It’s a really interesting thing here that a lot of other places are now trying to replicate.”

Byron said Vancouver’s cross pollination stretches beyond the city to Silicon Valley. The city’s entrepreneurs go back and forth and students do stints there after graduation. Even the Vancouverites who choose to stay in the Valley make key introductions for Vancouver’s other emerging entrepreneurs.

“The valley is whole different universe in terms of funding and startup culture, so being able to get access to that, to play things off that, and to understand how that works is an advantage to any company,” Byron said.

That entrepreneurial collaboration in Vancouver has been a big driver of creativity and innovation, both in the city’s businesses and culture. Its reputation for it has opened markets to new business owners and attracted the talent that growing companies need.

“There are high quality people here who know that they are good at what they do, but want to live a certain type of lifestyle and are really attracted to Vancouver both for the cool type of work and the vibrancy of the city,” Byron said.

Byron pointed to the arrival of big companies like Amazon, Microsoft and Sony Pictures Imageworks as proof of Vancouver’s talent pool, even though their presence means more talent competition for companies like Optigo.

“We’re a little worried, but tech in Vancouver is built on that communal spirit,” Byron said. “All companies grow alongside you because as one company grows and exits, the money that they raise gets funneled back into the ecosystem and it’s used to fund the next crop of companies coming along.”

“I think a lot of companies in this building are hoping that Hootsuite’s IPO is next week,” he added. “As soon as it is, there’s going to be about 50 millionaires who now have the experience and money to help build the next round of companies.”

Byron also pointed to the weather in Vancouver as a reason why talent would continue to flow to the city.

“The worst two winters in Toronto have been the two years since I moved back,” Byron said. “That alone has been worth it. We have a family tradition to golf on New Year’s Day and you can do that here, where as it was minus 40 in Toronto this year.”

“There has been a lot of gloating over that,” he said, turning to look at the March sun outside his window. “It’s minus 17 still in Ottawa and here, the cherry blossoms are already out.”

For a chance at finding your roots in Vancouver’s collaborative tech scene, enter our contest for a free customized trip to Vancouver.