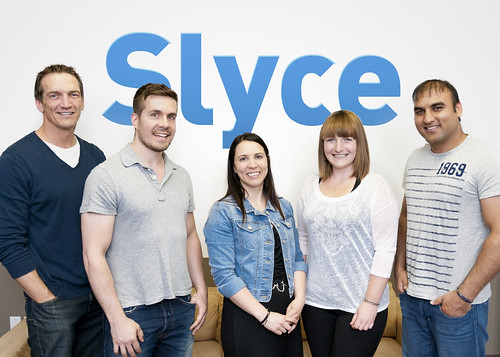 The deal, conducted through a reverse-takeover with capital pool company Oculus Ventures, will see shares in the company start trading on the TSX-Venture exchange.

The deal, originally announced in April, was valued at $36 million. The company has also raised $12 million through a private placement associated with the go-public transaction.

The company’s product is marketed at retailers, allowing them to add visual search to their apps.

“We’re the technology behind that search,” says Cameron Chell, Sylce’s co-founder. The goal, he says, is for users to be able to take a picture of a item and then buy it immediately.

“We have a fundamental belief that visual search will become more and more prevalent,” says Chell. “We see the space moving very quickly.”

That’s why the company went public, Chell says that being a public company will help the Slyce attract talent and raise capital for future acquisitions.

The company is a spin-out of Calgary-based Business Instincts Group, which Chell, the company’s CEO describes as a “venture creation firm.” Essentially, the company develops ideas and new technologies, setting up internal startups and then spinning them out as separate companies.

Other companies to come out of BIG include UrtheCast, which has mounted cameras on the International Space Station and went public around a year ago; payments provider Vogogo; and Cold Bore Technology, which is developing a sonic telemetry tool for mineral and oil drilling.

That’s why Slyce focuses on powering other company’s apps, rather than creating it’s own consumer app. Chell says it’s a matter of “playing to our strength.”

He’d rather provide technology to companies that already have a customer or user base. “To build a consumer brand you have to get lucky,” Chell says. “It’s hard to plan for.”

“The toughest part of visual search is context,” says Chell. Two people could take a picture of the same thing and be interested in different elements of it.

That’s why the technology is plugged into a specific retailer’s app, those apps “already have context,” Chell says. But Slyce isn’t alone, big players like Amazon are also getting into visual search.

“In the last six months we’ve seen more activity than in the previous three years,” Chell says and he expects the “next two months to be busier than the previous six.”

The potential for stiff competition and the wide variety of applications for visual search is part of the reason the company chose to focus on a specific niche. It’s an attitude that Chell says applies at all BIG’s spin-outs.

“We narrow and narrow our market niche to where we can out-compete anybody,” he says.

Competition should be good for Slyce, Chell says, as companies like Amazon develop their own visual search products, their competitors will look to companies like Slyce.

“Retailers aren’t going to go to Amazon because they’re competitors,” he says.