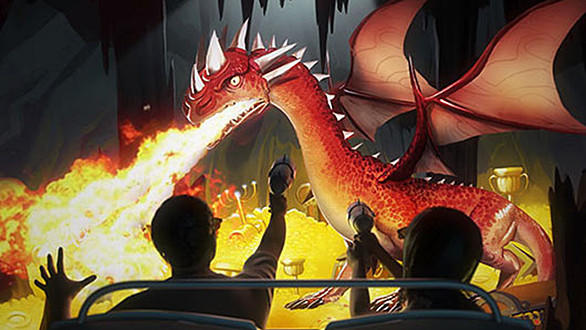 The City of Toronto is arguably one of the most entertaining cities in North America, complete with year long festivals, art galleries, theme parks, aquariums and everything else fun-loving human beings want in a metropolitan area.

Just North of the gargantuan cityscape is a mystical, magical place that is equally as stimulating called Canada’s Wonderland. This enormous rollercoaster park has changed hands a few times since it’s creation in 1980, but has throughout it all been a staple of incredible excitement for kids and adults all around for over thirty years.

Keeping a park like this on the cutting edge of entertainment is not easy and one of the ways the masses are enticed to come back is by staying as up to date as possible on new technologies to make the experience that more fulfilling to the visitors.

“Virtual Reality is becoming increasingly popular at amusement parks and Canada’s Wonderland introduced and tested VR during Halloween Haunt in 2015,” says Soulla Lindo, Manager of Communications and PR for the park. She went on to say that during that time, riders wore virtual reality headsets on one of their popular roller coasters called “Thunder Run” and it simulated riders the experience of being on the back of a fire breathing dragon.

“The 360-degree 3-D VR experience syncs to the movement of the roller coaster to fully immerse riders in a virtual world. With VR, you can transform a ride to an entirely new theme with just a headset and we’re currently evaluating permanently implementing VR at Canada’s Wonderland,” she added.

Wonderland is also implementing something called “digital dark” technology where riders on a roller coaster enter a dark area and digital screens come up and display monsters and other fantasy-like creatures that in some cases the rider is required to ‘shoot’ with a laser gun or other device. One of their rides called The Guardian features this technology significantly.

“We partnered with Montreal-based Triotech, a leading manufacturer of multisensory attractions for the amusement industry, to develop the groundbreaking technology for this unique ride experience. The Guardian is part roller coaster, and part large multiplayer video game. Riders (wearing 3D glasses) enter a cavernous new world of mythical creatures and navigate through five different layers of a 4-Dimensional medieval world where they battle with guardians of the dragon’s treasure,” Lindo said.

If those developments aren’t enough, then visitors to the park can feast their eyes on the “Dinosaurs Alive!” attraction where animatronic dinosaurs of all kinds move and roar, making kids and parents alike enjoy the experience of having life-like dinosaurs roam around right in front of you.

Whatever age you are, Canada’s Wonderland has something you will love and it is more than worth the trip North of Toronto to have a day of roller coasters and other attractions fit for any age.