A new report from PwC looks at exactly how the company leaders think their ventures will grow and profit in the future.

PwC’s twenty-first Global CEO Survey looks at how lead executives around the world think their company will do over the next year—and a record-breaking 88 per cent of Canadian CEOs are optimistic about their company’s prospects for revenue growth. In addition, 72 per cent think global economic growth will improve over the next 12 months. In total, 1,293 CEOs were surveyed, but this article will focus on the Canadian findings and compare them to a broader global standard.

In terms of where Canadian CEOs think that growth will come from, the U.S. is the top choice at 88 per cent despite any kind of NAFTA uncertainty, followed by China at 53 per cent and the U.K. at 30 per cent.

“There’s great optimism and momentum within the Canadian business environment with exciting opportunities ahead,” said Bill McFarland, CEO and Chief Inclusion Officer at PwC Canada. “Many Canadian CEOs are looking to create partnerships and alliances at home and abroad for future growth.”

In terms of what CEOs think could hinder their growth, the key threats include geopolitical uncertainty at 88 per cent, protectionism at 84 per cent, and cyber threats at 81 per cent. That last one makes sense, especially considering a recent survey showing how nine out of 10 companies have suffered a breach in cybersecurity.

The study also looked into how Canadian CEOs are dealing with new technologies and the ever-competitive talent market.

One of the glaring shortcomings for Canadian executives came when PwC asked how clear their understanding was in regards to how robotics and AI can improve the customer experience. Only 28 per cent of Canadian CEOs were clear on how these emerging technologies can help, compared to a global average of 47 per cent.

When it comes to asking about how disruptive these new technologies will be, Canada fell in line with the global average as 67 per cent of CEOs agreed that AI, robotics and blockchain would be disruptive. The global average was 64 per cent. 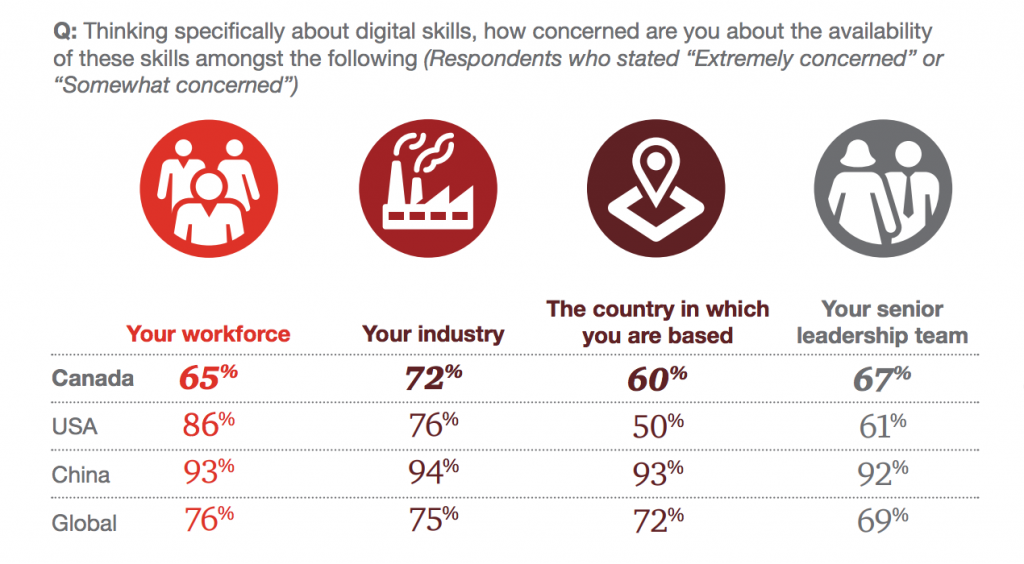 When it comes to attracting talent, close to half of Canadian CEOs say they have trouble in finding the right fits for their company. Despite the shortage and the difficulties, only 16 per cent of CEOs work closely with educational institutions, a major source of new recruits. Shockingly, 40 per cent of Canadian CEOs say they have no plans to work with an educational institution—this is compared to 22 per cent of global CEOs.

Still, despite some Canadian CEOs’ lack of willingness to work with educational institutions, it could be for the best. A recent Talent Fuels Tech report from MaRS found that the majority of tech talent looks for jobs in traditional ways like job boards and corporate career pages, and that large companies often spend too much time with things like job fairs and post-secondary initiatives.

PwC is a major player when it comes to the tech scene in Canada. Just a few months ago, they unveiled a new digital accelerator in Toronto.