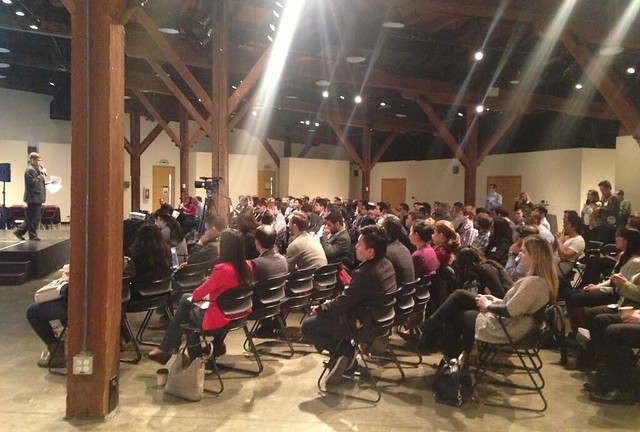 On a drizzly Thursday, Yaletown’s Roundhouse Community Centre saw an event completely unprecedented in the history of Vancouver’s technology scene—though to be accurate, the event really celebrated the entrepreneurial successes of all the Pacific Northwest.

The Cascadia Startup Day Event, which ran from about nine in the morning until eight o’clock at night, was the result of the most prominent five regional startup accelerators working together: representatives from GrowLab, Invoke Labs, Launch Academy, Spring Activator, and Wavefront were all instrumental in bringing the event to fruition.

“As far as I’m concerned, we started it,” Bradford Lowe at Wavefront proudly says. “We all get along great in the community, but we don’t really do anything together. We get invited, but we weren’t really all pitching in to get something done. Vivian [Chan] started calling up all the other ones and asking if we could get something done. From Wavefront’s standpoint, I wanted to draw on their network of investors to see some handpicked companies to see if they were investment ready.”

As did everybody else. His claim to have started it is contentious, considering that the Cascadia name has been used for prior events thrown by GrowLab and Launch Academy down in Seattle as early as 2012. The inclusion of all of the accelerators, however, was their doing—though without the sacrifices and dedication of every team, it could not have taken place.

The day was split into segments. Not all attendees were privy to all portions of the day. In fact, that would have been impossible. From 9:25 until noon, attendees could choose to sit in on any four of 16 talks.

The main hall’s events were commenced by Michael Tippett, brother to Jonathan and Director of New Products discussing product process to an audience of more than a hundred entrepreneurs. He was followed by John Gray, who shared the stage with Amie Rotherham to share their thoughts on getting the attention to the media. But it was the combination of the large presentations and the intimate discussions small rooms around the corner and up the stairs from the main stage that made Cascadia Startup Day unique—if not always effective.

The Founder Stories series of panels gave local entrepreneurs a platform to discuss and explore topics that were in their area of expertise. The “What Accelerators Did and Didn’t Do For Me” panel offered its audience a view into many different accelerators, and the virtues thereof; panelists included Keith Ippel, Jay Parmar of Picatic, and Babak Sardary, the CEO of ScoopMae. The panel on startup breakups was necessary; a palate cleanser, and a reminder that business must be business and not life.

Regrettably, the first of the Founder Stories was tremendously uneven. Melissa Kwan of Flat World Applications was given the unenviable task of headlining a talk on diversity by herself. A single speaker on diversity would be ironic enough without Kwan’s consistent distancing of herself from her gender—which she claimed to be tasked to speak about—with Kwan portraying being a woman as something that only matters in the tech community.

“It’s funny when you’re in tech and you’re a woman, you get so much attention, and it’s almost not right,” she said. “I want to think of myself as a capable human being, not a capable woman, and no one’s ever made me feel like a woman until I came into technology. I don’t want to be recognized as a female founder because I’m a founder. I don’t see myself as that, and I don’t operate as that.”

She went on to deride the practice of active inclusion at tech events, even with her admission of benefitting from it.

“People inviting me to events just to balance out the room? I don’t think that’s that important. Your success is dependent on who you are, not what you are,” she said. “When you’re constantly highlighting the fact—I wasn’t a stereotype until you put me there. In a way, I feel kinda bad about it, but I’m kinda hypocritical because I leverage that to get the attention that I need.” 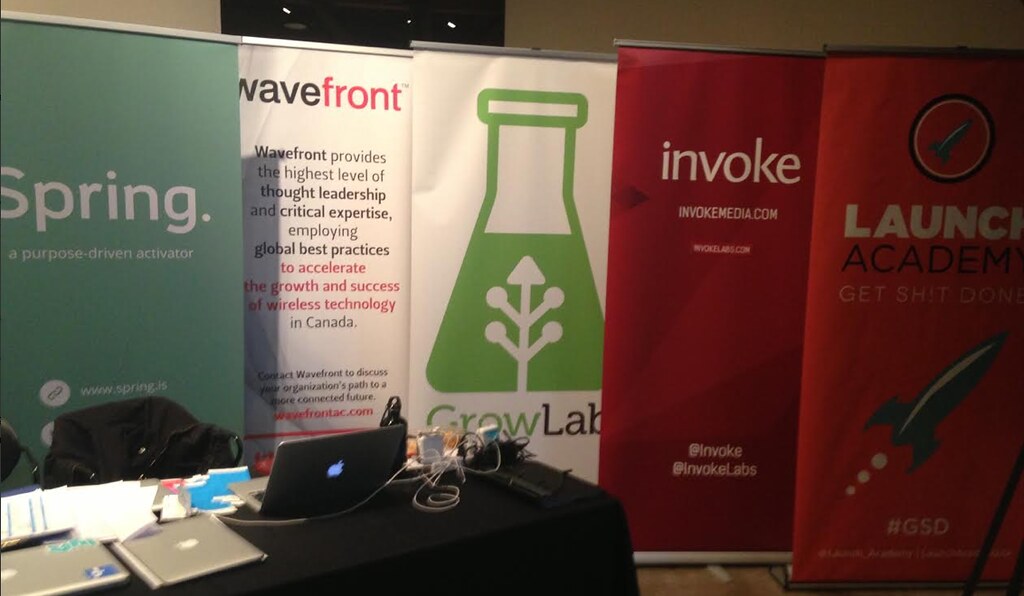 The afternoon and evening highlighted the passion and idealism of the region’s entrepreneurs. After a series of small mentorship groups, the competition portion of the day began. The 25 exhibitors all brought the best they had to offer to the hall, but only five startups would take the stage. Tokens were tossed and beers were tossed back as the crowd milled about before the final judging.

Bradley Shende had the unenviable task of MCing the pitch competition. Why the organizers chose to neglect the very viable theatrespace beside the main hall is unknown, but Shende was forced to bellow over the sounds of merriment from the back of the room. The five startups to win the most votes were BitLit, PrinttoPeer, MoleScope, CrowdContent, and My Best Helper. The judges included Jeff Keen of Accelerate Okanagan, James Suk of Boast Capital, Andrew Lugsdin of BDC, Alex Baker of Relay Ventures, and Amy Rae of Vanedge Capital.

None of the startups that made the final were beyond the help of a little course correction, though it was difficult to understand why CrowdContent, a platform that would connect businesses with original content provided by writers enjoying a gamified experience, deserved 42% of the price of the pieces they would sell. The winner was GrowLab’s BitLit, a service that connects paper-book owners with the e-book version of the title for greater convenience. In context, the win was sensible. Peter Hudson, who gave the pitch, has been in the entrepreneurial space for a decade. Still, the victory clearly cheered him, and at the close of the event he was red-cheeked and jovial.

“I didn’t think our odds were better than one in 20,” he said. (He believed there to be twenty startups present; there were actually twenty-five.) “I knew the other GrowLab startups, but none of the others from the other incubators. We’ve actually just spent the last three weeks down in Silicon Valley with GrowLab pitching to VCs getting really great feedback on what’s good with our pitch, our business model, what we need to tweak. I also just went on to Dragon’s Den.”

Hudson sees himself on a private island after a billion dollar exit in 2015; if that falls through, he just might attend next year’s event. There will be another event—excess funds have been preserved for the next Cascadia, though there is some swirling questioning over whether we’ll have to wait a full year or only until the fall.

It’s been 170 years since The Three Musketeers was serialized, but “all for one, and one for all” has remained popular for a reason. Cascadia Startup Day brought the region’s entrepreneurs, investors and advocates to celebrate and support one another. That will always bear repeating.