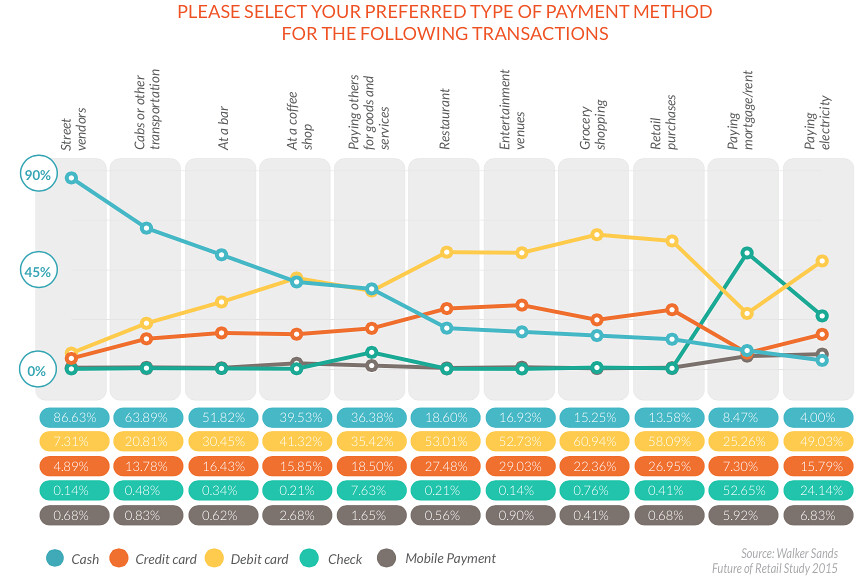 Consumers still think cash is king when it comes to security.

However, Walker Sand’s 2015 Future of Retail Study reveals that the popularity of cash continues to be on the decline among North American consumers. This year’s report finds that 59 percent of consumers have $20 or less in their wallet, and nearly one in five consumers (18 percent) says they have no cash in their wallet at all.

Cash still rules in terms of security though: 56% of consumers believe cash is the most secure form of payment. 22% say the same for credit cards; 16% for debit cards. As for a mobile wallet or smartphone app? One percent.

Despite this, the study shows that consumers aren’t using cash as frequently, even if they’re carrying it just as often. Only 11 percent of consumers have used cash in the past day, compared to 27 percent a year ago, and more than a fourth of consumers (29 percent) haven’t used cash in a week or more.

Even though cash is on the decline among consumers, it is still the preferred form of payment for street vendors (87 percent), cabs and transportation (64 percent) and bars (52 percent). And more than half of consumers still use checks to pay their rent or mortgage, while almost a quarter get their checkbooks out when paying bills. Consumers currently use mobile wallets or applications when paying bills (7 percent) or their rent/mortgage (6 percent), as well as at coffee shops (3 percent).

Less than one percent of survey respondents said their smartphone is the preferred form of payment at retail locations, demonstrating how far the industry still has to go when it comes to mobile payments.