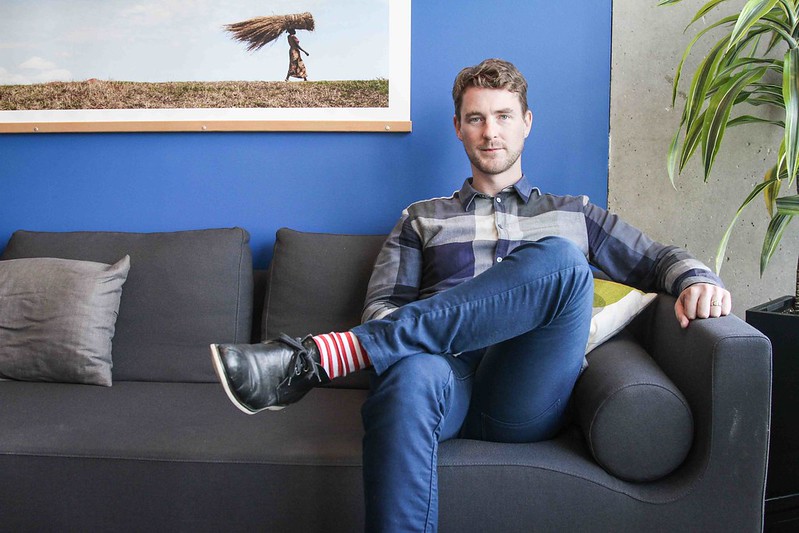 That’s the estimated number of registered charities in Canada, and so that’s the number of charities the he gives Canadians access to through his online tool, Chimp.

The name Chimp is a blended form of “charitable impact” – a unique name for a company founded from a unique set of conditions.

Bromley, 36, owes his initiative to being a subject matter expert and spotting opportunity (though he admits wanting to save the world is an established fact for anyone working at Chimp – himself included).

His own background was in investment banking and corporate finance, and he learned all about charity from his father who is a pioneer in the field of charity law. That accumulation of knowledge and experience led to Chimp, which is really Bromley’s attempt to solve the problem that had been gnawing at him for a while.

“How do you give the average Joe in Canada – who gives $250 away a year – the ability to give more easily and manage their giving more easily?” he asks, already immersed in fine-tuning the company that is his answer. “We’re still in the end stages of a minimum viable product, although it’s very robust.”

Modest words for an outfit that, according to Bromley had already completed $15 million in tax-receipted donations before any real marketing or communications structure had been established.

Now that those teams are in place, Chimp is focused on helping charities and companies run fundraising initiatives.

Most recently, Bromley’s charity tool powered all the donations for Clara Hughes’ bike ride around Canada to raise awareness of mental illness. Working with the main sponsor, Bell Canada, Bromley understands that Canadian giving is driven by fundraising. People donate when they’re asked to.

And the opportunities don’t stop with just single companies or non-profits. Bromley sees his platform’s capabilities reaching far beyond the traditional solo, or small partnership campaigns.

“We’re innovating that space to say, ‘Here’s a campaign on mental health like Bell’s, but one where every mental health charity in the country can participate.’ That’s never been done before.”

By empowering donors with a centralized, cause-neutral tool to manage and track their donating, Bromley hopes to realize the big level goals of Chimp.

“We’re trying to develop a culture of giving in Canada that gets baked in to who we are, and how we do things, and how we think,” he says.

At the same time he wants to make the process of getting money to charities more effective. According to the entrepreneur, charities are in control right now because we have to deal with them individually, and tax receipts come at the cost of names and other personal information.

However, in a world with Chimp, when you’re solicited by a charity you can thank the representative and send them on their way while you check the validity of the organization online. Taking action then only requires a click or two, and the donor can choose to remain anonymous.

Empowering contributors and eliminating donor fatigue are good first steps in nurturing the “culture of giving” Bromley speaks about.

The act of giving at an individual level, he says, is a human trait that needs to continually be developed.

“If it needs to be developed, you have to have the context in which it carry it out,” says Bromley. “And carrying out that context as it relates to charity, is what Chimp’s about.”

Chimp was listed in June’s Techvibes 20 as one of the most promising tech startups in Canada. The company will be hiring at the Techvibes Tech Fest on September 18 in Vancouver.