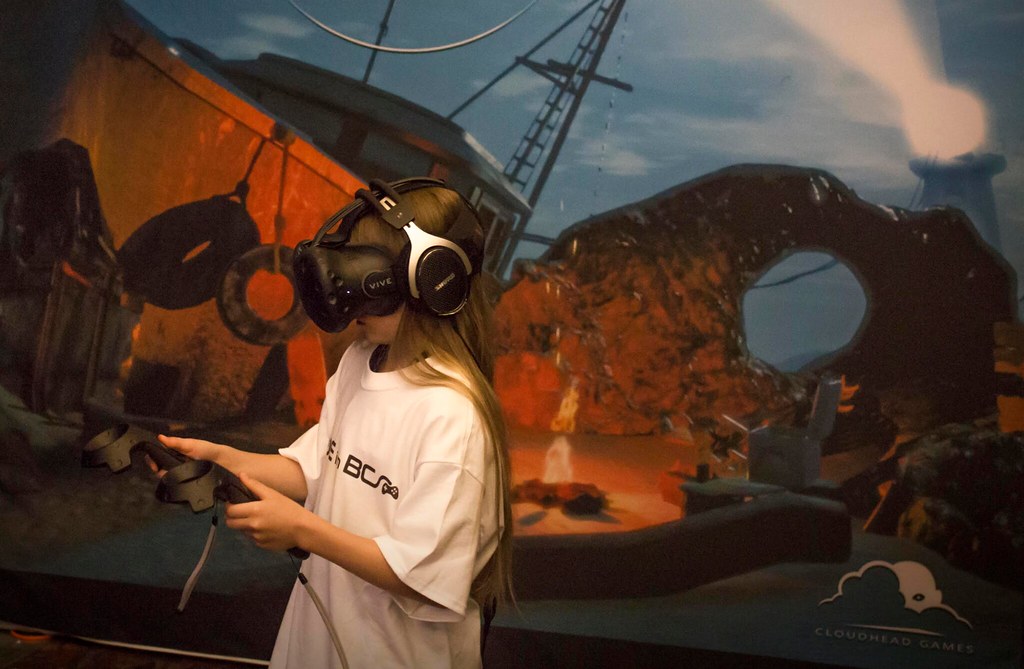 With their heads in the clouds, a Vancouver Island team is seriously standing out amung the crowd of Virtual Reality developers. So much so that TIME Magazine chose “Call of the Starseed – The Gallery Ep.1”  as one of the best launch games on the VR device.

In 2012, Cloudhead Games made a pact to change the way the rest of the world views Virtual Reality. Holed up in their surreal cabin-like office on Vancouver Island’s coastline (Qualicum Beach to be exact) they’ve been working tirelessly to perfect a few things that most other VR Dev teams have forgotten, and these things make or break everything about gaming in VR. That is to say, Cloudhead Games is developing entertainment striving to excel in both narritive, and interaction. But what does VR mean to us now?

The term Virtual Reality is an ever-changing one. In the 1950’s the Sensorama was one of the first “immersive, multi-sensory” experiences. Followed by the introduction to Flight Simulators used to train Air Force pilots, by Thomas Furness III. Then a bunch of gumbled mistakes, a cash-grab half-hearted effort by a legendary namae (yes, I’m looking at you VirtualBoy), and the general public has an oddly sour taste in its mouth when it comes to that term.

Now, however, VR is a place. The worlds that live in Virtual Reality are destinations, and with consumer VR becoming a thing, VR is an extreme tool for entertainment.

Let’s not forget about the practical applications of VR in the development of skills, or in education. See my piece on Finger Food Studios (although, they’re using AR not VR, the application can be grasped).

SEE ALSO: ‘Made in BC’ Event Shines Light on Local Tech Industry

This is something you can’t believe until you’ve tried it. You hear people speak about VR, and the experience that they’ve had while playing in it, and you start to think they’re embellishing, or speaking in incomprehensible hyperbole.

That is… until you put that headset on, slide those headphones over your ears, and grip the controllers tightly. Launching the game, I’m transported to another world. A place that Mike Wilson, Cloudhead’s Narritive Designer has helped create. And after standing by his side, observing a few dozen people try the demo, and picking the writer’s mind a bit, the world of The Gallery Ep.1 is a place I already felt a little bit invested in.

In my time observing, there are two types of VR demos; the one where basic human movement needs to be re-learned (generally by those of a more mature distinction), and those who take to the virtual presense with ease. Luckily, I had Wilson there to put up with my nagging… and answer my questions.

“I get to show up, write and amazing story, and go home” bragged Wilson when I asked about his work day.

But when my time with the demo started, something almost scary happened; I completely lost my physical self in Call of the Starseed.

The demo for The Gallery Ep.1 starts in an Animus-type location (ala Assassin’s Creed) and provides a fully-immersive basic tutorial narrated by a pleasantly soft voice.

Once I was done with basic interaction, and movement (in Call of the Starseed, Cloudhead has developed a blinking system for movement) Wilson threw me into an early level of the game. All of a sudden I was standing on a beach, umbrella’d by the night’s sky full of start, and left to explore a space that obviously JUST had people in it.

It was then that I forgot Wyatt, the person, was real.

“In my brain, it feels like this is real,” exclaimed Wilson, supporting my new-found amazement in divorcing the outside world.

I wanted to touch everything. Lift every rock. Read every note — there’s a lot of love and care put into the small details in Starseed, you’d benefit from taking the time to admire it all —, and even see what I could light on fire with the candle I was now holding in my left hand.

All of a sudden, the giant conference room, filled with MLA’s and developers, didn’t exsist.

Forty-five minutes went by without a second thought. All I wanted was more. After informing the fine folks at Cloudhead that I would have gladly spent all evenening inside their world, I asked Mike Wilson what it was that made developing for VR more appealing (as it’s still in its infancy) than casual, or console game dev.

“There’s nothing like it,” he starts with a sly smile “this here” pointing to the double-celled booth “allows me to make an experience that rekindles the sense of real adventure that you, and me felt when we were young.” he spoke ademently. “I have the best job in the world”

Cloudhead Games is quickly becoming the forefront of VR development in BC, and is onto something with their episodic title Call of the Starseed.

The consumer VR space is so small right now due to the financial, and stigma related hesitations, but it’s beyond inspiring to see a team of mind-blowing talent, create such an alarmingly beautiful experience. And they’re a product of Canada. Bonus.

Catch all of Cloudhead’s developments on their blog, and be sure to pick up a copy of Call of the Starseed – The Gallery Ep.1 if you’ve managed to snag yourself a HTC VIVE set-up in your home/office.

A special thanks to DigiBC for putting on the #MADEINBC event.