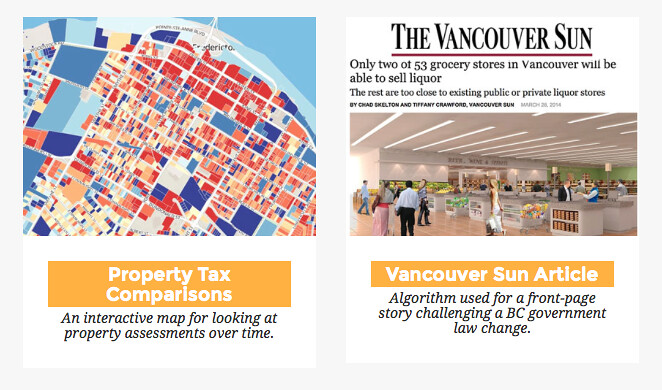 Arguably, we are in a golden age of open data. But harnessing that information and more importantly making sense of it, is a problem.

Enter Citizens Codes, a group of 20 to 30 developers and techies across Canada who want to help make big data beautiful—and accessible —for the general public. All for free. For example, when the Vancouver Sun needed to find out the number of grocery stores that would be allowed to sell alcohol under a new BC law, they approached a Citizens Code member who had build a mapping tool that could do just that. The result was a front page story on the Vancouver Sun.

Founder Ryan Brideau says he started the project after a couple of years tinkering with open data projects.

“Sometimes a problem pops up, and because you’ve already built all these side projects, you have the tools available to solve it immediately. That’s what happened with the Vancouver Sun article, I had code sitting idle for months, and when they e-mailed it only took about 20 minutes to run the results and send it back to them,” he says.

Brideau says the group is mainly made up of highly trained people who are paid enough at work, so want to do something creative and useful.

“At some point, it stops being about making a bit of extra money, and is more about having a creative outlet that gives you free reign to use your talents to tackle projects that have genuine personal meaning. For most people, that might fall into the domain of athletics or art. For us, it’s working with data,” he says.

Current data formats are inconsistent, and are not always easy to use if you do find them.

“The federal government is actually putting a lot of infrastructure in place to keep pace with governments like the UK and the US that are moving fast to open data. Provincially and municipally, we could be doing a much better job. We see it as our role to show people what can be done with the data if its released. Hopefully if we create enough examples, people can see the tangible benefits of releasing data, and the case for doing so will be much easier to sell,” he says, adding that he’d like to see the project expand in the future.

“I would love to see us get to a level where we can produce projects on demand, but we’re just not there yet,” Brideau continues. “Today, what we do resembles more of a slow-burning hackathon: have people present interesting ideas that don’t necessarily need to be solved overnight, and then work on them as fast as you can manage. This just means the domain of problems we work on are sometimes limited to the slow-moving ones: are we building our cities to be cash-flow positive? How is our provincial government spending certain funds geographically? How do you compare salaries between cities? That kind of thing.”

Currently, the group is made up of about 20 to 30 active members with new people coming on board every day.