The new Coding Bootcamp Market Growth Report for 2017 has been released (see the report in full at the bottom of this article), and it indicates that coding bootcamps are growing more than ever.

The fourth annual report polled every single full-time and in-person bootcamp in the US and Canada with courses in web and mobile development, aimed to gather graduation stats for 2016 and project stats for 2017. Ninety-eight per cent of schools responded and contributed data to the study.

The growth rate for 2017 compared to 2016 is large, hovering around 50 per cent growth. Last year just over 15,000 grads came out of coding bootcamps, and this year the number sat just below 23,000. There are 94 full time coding camps in North America, growing from 91 last year, and these are spread across 74 US cities and 8 Canadian ones.

However, seven schools closed in the last year, the most notable being Dev Bootcamp in San Francisco. They were the US’s first full-time, short-term intensive bootcamp and contributed a huge amount of information for other bootcamps to draw from. Reasons for other bootcamps closing ranged from re-branding to consolidation.

This all comes as some major bootcamp leaders described the industry as being in a difficult period. More companies means more competition, and some bootcamps are being bought up by large for-profit post-secondary institutions in a hope to remain relevant to potential students. This can work for some organizations, but it often results in mixed signals for students.

“Building and operating a new age technology school with high intensity training programs is very difficult, especially at scale. Maintaining the quality needed to produce sustainable results and considering the economics behind it are two of many factors that lead to success,” says Jason Field, Founder & CEO of BrainStation, a global tech school that runs bootcamps in multiple locations. “Our focus is to deliver content that is updated in real-time based on what’s trending in industry and that’s very different than the traditional model and of course requires a lot more investment constantly.”

Bootcamps can also be expensive, averaging over $11,000. Some organizers have reported being forced to either increase costs or lower admission standards to increase the amount of people taken in. This is not true of every bootcamp though.

Some bootcamps have also reported drops in job rates after graduation as more and more qualified candidates enter the workplace each year. Again though, because coding bootcamps are a new space and deal with dynamic factors, this can change frequently. You will hear this often—in a business so new, it’s hard to accurately form a consensus about trends and reports.

“Technology morphs and changes every year so it’s really difficult to forecast the amount of opportunities available in five years,” says Field. “Something that isn’t going anywhere is the economy’s need for highly specialized technical individuals that are very driven by digital.”

The Coding Bootcamp Market Growth Report is valuable to both students and educators as it helps show what an ever-shifting industry looked like over the past year and how it has grown.

“These reports give me a quick skim of the major themes to consider,” says Field. “That means I don’t have to focus on the everyday nitty gritty details that aren’t necessarily the big themes that may describe what the coming years look like.”

Coding bootcamps have become a $260 million industry, and if you want to know what you’re most likely to learn in one, the language most often taught is full-stack Javascript (39 per cent) followed by Ruby on Rails (20 per cent).

Here is the report in full: 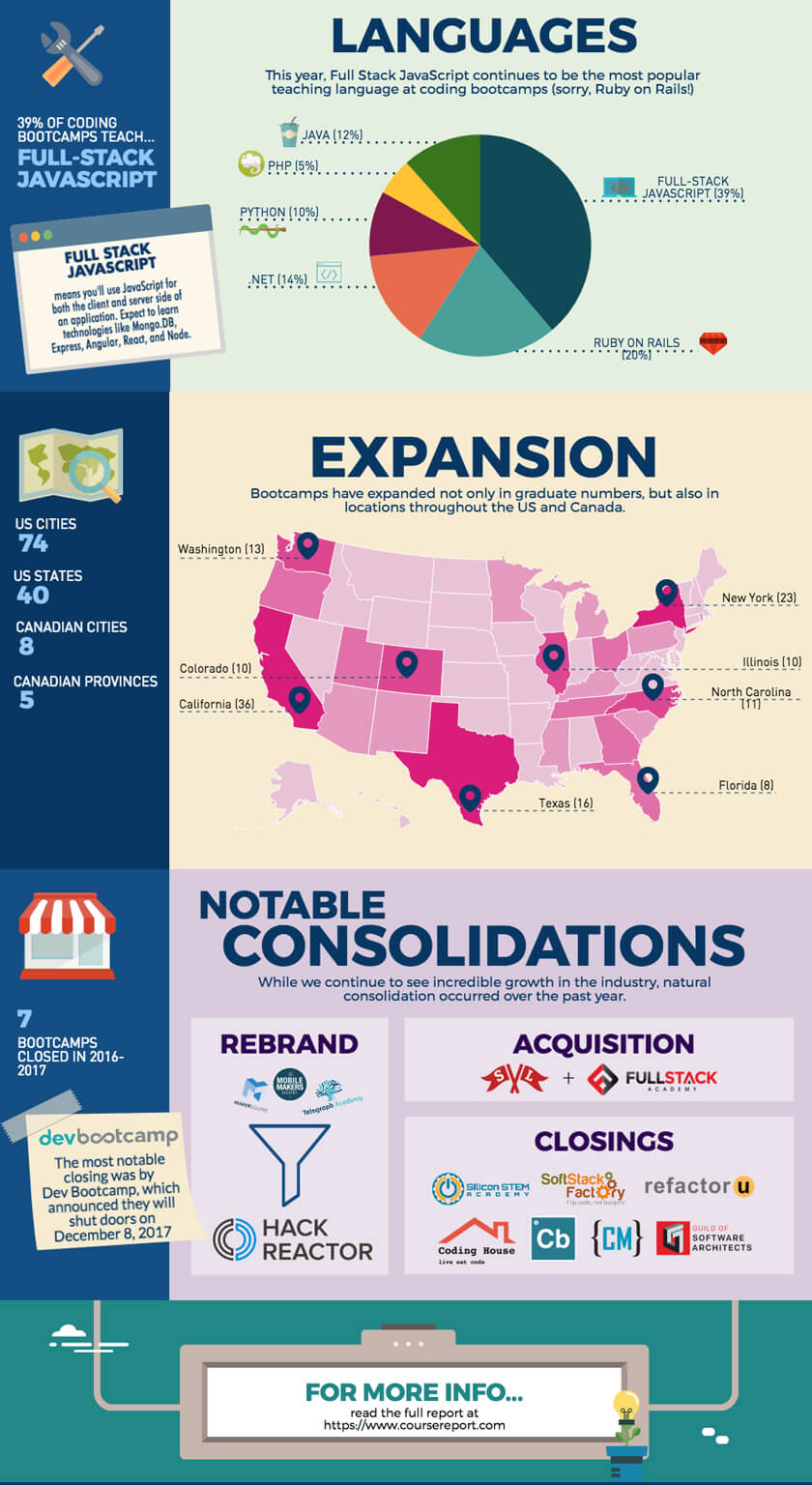 Disclosure: Techvibes and BrainStation are part of Konrad Group.