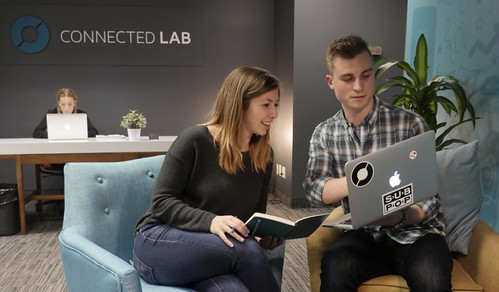 The co-founder and CEO of Connected Lab, a Toronto-based development studio for-hire is always working on projects for other companies, much of the time he can’t even talk about what he’s working on.

“We don’t mind,” he says. “Often we are in in the trenches, behind the scenes helping big brands launch their products. However, often it’s at a company like Connected where … you actually get to be part of the team that takes an idea from the back of a napkin to the nuts and bolts of product development.”

That comfort with being behind the scenes applies to his business as well.

Connected Lab launched in the fall of 2014 but didn’t announce its existence until November.

“There wasn’t really any need to not be under the radar,” he says. “We just wanted to roll up our sleeves and focus on working. Not much has changed since we announced that we exist.”

The team behind Connected Lab has a long history of working in the contract development business. Most the core team, including Stern, worked at Xtreme Labs, a studio-for-hire that was acquired by San Francisco-based Pivotal in 2013. That core team, a group of 10 people, is mostly made up of Canadians who were working in Silicon Valley, there they worked on what would become some of the world’s most popular apps.

“We helped build the first few iterations of Uber’s mobile apps, we helped Facebook move from a mostly web offering to a mobile offering and then built the first Facebook Messenger applications with their team,” Stern says.

It gave the team a first-hand view of the shift from web to mobile.

“We kind of saw how that transition was happening a little earlier than a lot of the other bigger brands,” Stern says. By 2014, he says, the team knew it was time to focus on the “next wave of innovation.”

That next wave of innovation is often called the internet of things but Stern doesn’t like the phrase.

“The term IoT is such a loaded and broad term that it’s almost meaningless,” he says.

He says there’s been too much hype around IoT and not enough thought.

“Because so many brands were late to mobile and then had to play catch-up to figure out how to create a mobile strategy and then execute on it, I think a lot of brands are looking at IoT and sort of rushing into the space,” he says. “I think there’s a lot of people building connected devices and connected device software that either is broken or doesn’t solve a real customer need.”

“Our methodology is really centred around building user-centric software that works and actually enhances their lives, often a lot of our value is around challenging our clients premises around what they think they should build,” Stern says.

He says the products Connected Lab is building go well beyond single apps.

Since launching, Connected Lab’s team has grown to 55 people.

“The amount of talent here in Toronto is breathtaking,” Stern says. So far, the company has received 4,200 applications.

“We truly believe, and our clients tell us, that we’re the best software team for-hire in North America right now and it’s in a large part because of how strong our pipeline of talent is,” Stern says.