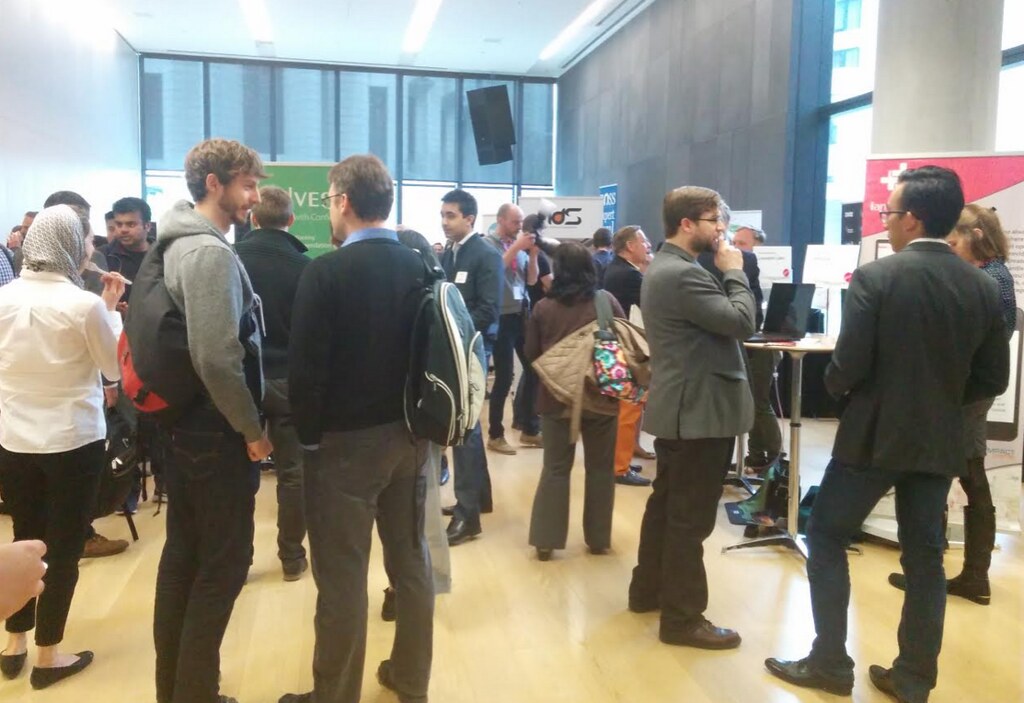 The Rotman School of Management at the University of Toronto campus was packed as hundreds of people people piled in for DemoCampToronto 2015.

Hosted by the Creative Destruction Lab, an accelerator for deep science technology startups and a host of a year-long MBA course with the Rotman School of Management, the event hosted over 30 startups in demo area, ranging from big data to virtual reality to medtech.

The showcase brought tech enthusiasts and startups together in one room, and provided the sense of community so essential to the fostering of startups. To kick off the event, a panel moderated by Professor Joshua Gans, chief economist from the Creative Destruction Lab, had speakers – which included Creative Destruction mentor (known as a G7 Fellow) Dan Debow, Neverfrost founder Khanjan Desai, Perceptiv Labs founder Yan Ma and Rotman MBA student Megan Dover – talking about their experiences at the Lab and the road to creating a deep science startup.

“They’re relying on pretty complicated technology that doesn’t often have an immediate path to market,” says Sophie Milman, one of the organizers of the event who does communications and outreach at the CDL. “They’re always strong on the science map, but maybe not necessarily on the business map.”

Ajay Agrawal, founder of the Creative Destruction Lab and a professor at the Rotman School of Management, also spoke with Haig Farris, an investor in early stage startups who an early investor in D-Wave Systems, a commercial quantum computing company. While Canada has a lot of talent, tech still isn’t embraced enough on a more mainstream level that would put us on the level of Silicon Valley, making networking and mentorship all the more essential.

After introducing Farris, 12 startups got to pitch and present their products. Of note were ROSS Intelligence, a digital legal expert built on IBM Watson who recently presented at TechCrunch Disrupt in New York, and ZEITDICE, a smart timelapse camera that father of wearable technology Steve Mann himself said had great potential.

“I look at things that have immediate potential right here and right now,” Mann says. “People talk about big data, and that’s coming over time, but the timelapse camera is something that I can see taking off immediately as an instant success.”

After the kickoff panels, attendees got the chance to browse through dozens of other startups in the lobby. “We wanted to create an event that is university agnostic, where no matter where you develop your tech, whether OCAD, Ryerson, U of T or Waterloo, you can come and showcase your product and pitch it to an audience that’s relevant.”