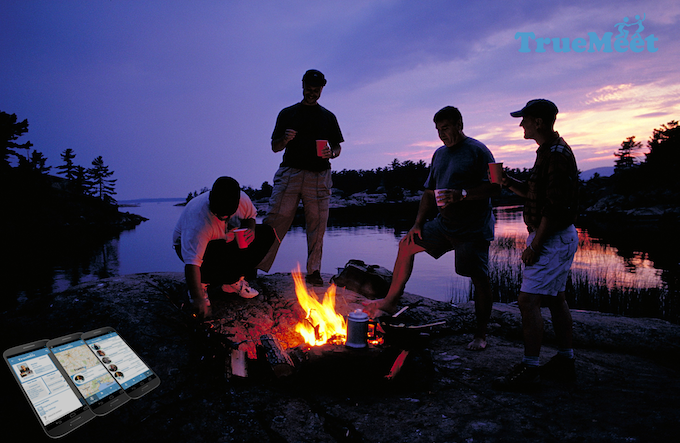 “We think that it’s not giving people a way to meet,” he says. “People stay at home, they stay on their computer and they share photos.”

Leroux is developing an app called TrueMeet, one that he describes as “the opposite of Facebook.”

He’s currently raising money on Kickstarter to bring the app to market.

The app uses geolocation to bring people who want to do the same thing, in the same place, together.

“It’s a tool to make real-time connections to meet people who want to do the same thing as you,” Leroux says. “It’s just a tool to find people for a specific activity at the same time.”

He says that while there are plenty of apps that help people meet nearby strangers for romance, there’s nothing for people who need an extra player for their sports team, to play a game, or even just for a platonic drink.

While TrueMeet will be something like a social network, it will be entirely focused around activities, there’s no place to post photos or statuses and the chat functionality only exists with the context of a specific activity.

“I want to create something that is useful for people,” he says. “I feel it’s a bit disappointing when everyone is on smartphones and people cannot talk to each other and share real things.”

Leroux, who has a background in network management, says he’s developed a sort of prototype for the app and has hired a Montreal-based development team to build the final product.

He plans to have both free and paid versions of the app.  Still, building a big enough user-base will be a challenge, Leroux admits that the biggest challenge he faces will be getting people to believe in the app.

He says that he plans to target his marketing efforts at Montreal when the app first launches. After that, he’ll begin marketing in Toronto, Vancouver and Quebec City, before expanding across Canada and the United States.

While new social networks aren’t uncommon on crowdfunding platforms, few manage to raise enough money to reach their goals. So far, TrueMeet has raised over $38,000 and is more than halfway to its $75,000 goal.

But the majority of that comes from a couple large contributors – four backers have pledged at least $6,890.

Leroux says that when he launched the crowdfunding campaign he didn’t do a lot of marketing.

“It’s either people we work with on the project or family members, people like that,” he says.

But, he says, around half the backers he has – including some big ones – are strangers who have pledged large amounts because they believe in the project.