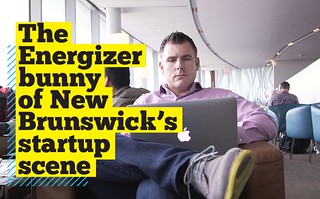 It’s a dream for many entrepreneurs – launch a company, build it and then sell it for a handsome profit. But what happens when that dream comes true? Is there life after acquisition?

There is if you’re Dan Martell.

He’s the Energizer bunny of New Brunswick’s startup scene – he just keeps going. In fact, the Moncton-based entrepreneur has seen three of his companies acquired.

His first company, Spheric Technologies, was acquired in 2008 by a U.S. company called Function One. He followed that up with Flowton, a San Francisco-based social marketing product that was acquired by Demandforce in 2011. Then he founded Clarity, which connects users by telephone with expert mentors who provide business advice. That was acquired by Fundable in February 2015.

It’s quite a track record.

Martell traces his success to his focus on building businesses that solve problems. Big companies want to acquire results, not just hype.

“The first thing is you’ve got to build a business,” Martell says. “People talk about building a company to flip it or sell it, it’s just ridiculous.”

Martell’s approach is to build the company because you truly believe in it. When you start getting momentum, the right people will start paying attention. These people either want your technology, your customer base or your expertise.

“If you’re out there being successful, you’re going to get inbound requests from big companies. There’s a certain size for a big company where they can’t innovate anymore… and they’re ok with buying companies to fill that gap in their product roadmap,” Martell says.

“What you need to do strategically is when you get one inbound request, put them on pause a little bit and you parlay that into conversations with three or four other companies and create a competitive advantage.”

Typically when a company is acquired, there’s an “earn out” period where you work at the company for two or three years, integrate it and make sure the transition works out. Or what some Silicon Valley wags call “vesting in peace.”

While many choose to live comfortably on their earnings and never work again, that’s not Martell’s style. He now has a new business that teaches technology entrepreneurs how to start, scale and sell their businesses, and it’s run through his personal website.

“Kind of taking the expertise that I have and I’ve created a few programs around that,” Martell says. “I put it together in a training program. That’s what I’m doing. It’s essentially my sixth business but it’s just DanMartell.com.”

This article was written by Cherise Letson and orginally published in Huddle.today. Read the rest of it here.