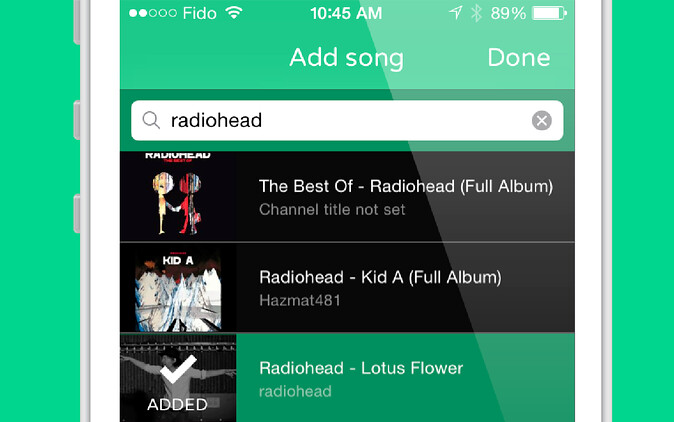 Testing a new product can be a difficult, if not tedious, step in any startup process. But for entrepreneurs Johannes Schut and Chris Greenwood, the serious product testing takes place at their parties.

The DJ2Q app was born when, mid-way through a soiree they were hosting, the frustration of appeasing so many guests’ musical requests got to be too much.

“We wanted to change the way people could listen to music at shared parties or work spaces or picnics in the park,” says the 25-year-old Schut.

He and partner Greenwood are well on their way to creating that change. Their brainchild is an iOS and web-based application that allows a host to create a space where others can send song requests to be queued.

If it sounds too simple, that’s because it is—and intentionally so. Similar predecessors had too many barriers: limited pools of songs, legality concerns, users crowding around a single device, account sign-ups, long lag-times.

“We want to be providing the service with as few barriers as possible,” explains Schut.

Drawing all of the music and video provided on DJ2Q from the massive YouTube library is one key way they avoid those obstacles. And if barriers to the user are a concern for the app, hurdles in development don’t seem to slow the creators.

Greenwood has been living in Thailand and the other two partners are in Sweden, forcing a collaboration over three widely-distanced timezones.

“When you’re working on web projects, you don’t really need to be in any one specific place—as long as you’re your own boss,” says Schut, the designer of the team.

He and Greenwood, a web developer, started on the notion of DJ2Q in February in Vancouver. Later, when Greenwood was in Bali coding for the project and vacationing, he met Jonatan Lundin and Daniel Roth of Hyperlab AB, a Swedish iOS development consultancy.

The two loved the party playlist app and jumped on board, providing the experience and financial backing needed to move the project forward. That was only three months ago, and the efforts of the DJ2Q crew show no signs of abating.

Adding to the already-democratized nature of the app (users’ requests are evenly distributed to avoid playlist hogs) the team is working on including a down-vote feature that will oust unpopular songs from the queue.

“It gamifies the experience a little bit,” notes Schut. “It promotes people putting on good songs.”

A recent Emily Carr graduate who studied there during the rise of the iDevices, Schut completely switched his focus from print to interactive design. “I found a lot more interest in working with things that are dynamic and shaped by the user,” he says.

As a result, the social outcomes of their experiment have given him the most pleasure.

“People love being involved and they love shaping their environment,” Schut explains. “Once somebody adds a song, somebody else might go talk to them about that artist or that band. It brings a new level of interaction to social gatherings.”

And for those of us who will fret over what music to select at our next hosted event, DJ2Q also brings some much-welcomed relief.