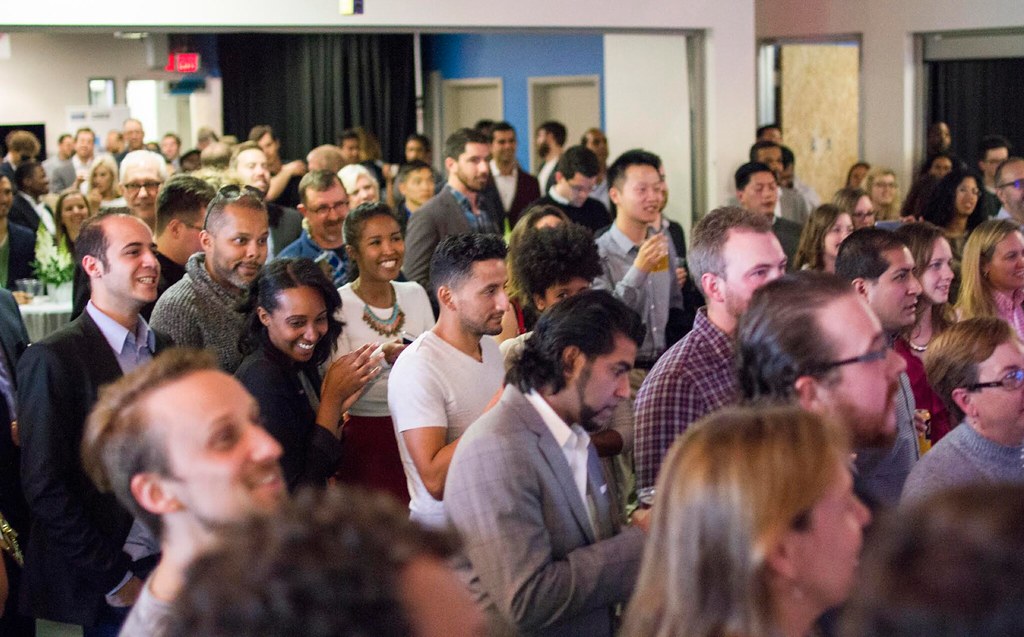 Yesterday the DMZ celebrated its sixth birthday with the theme “Six in the 6ix,” a nod to Toronto rapper Drake.

The festivities started with a brief pre-party for alumni, executives, and partners of the DMZ, with remarks from Mohamed Lachemi, the newly appointed ninth President and Vice-Chancellor of Ryerson University, Latif Nanji, co-founder and CEO of Roadmunk, and Omar Alghabra, the MP of Mississauga Centre.

The party was a celebration of the DMZ’s growth of the past six years. When it was first founded in 2010 by Val Fox, who is now the Chief Innovation Consultant at the Pivotal Point, and Sheldon Levy, the former President of Ryerson, it was difficult to imagine the accolades the DMZ would rack up in coming years.

“When Sheldon and I first started this, it was really to help entrepreneurs be more successful, we had no idea what that meant,” said Fox.

Much of the DMZ’s early success came from listening to the community of entrepreneurs around Ryerson University, and reacting to build an environment to help foster that community. That process lead to the DMZ growing from a 6,500 square foot space and a handful of companies, to over 200 companies, that have created more than 2,000 jobs, raised $172 million, and expanded to a space that is over 16,000 square feet.

The growth of the early stages of the DMZ was mirrored by international recognition. UBI Global, a group that analyses and ranks university-based business incubators, ranked the DMZ as third in the world this past year. That’s up from fifth in 2014, and in 2013, the DMZ didn’t chart.

“We’ve created a community of people that are helping each other be successful,” said Fox.

The DMZ has incubated hundreds of companies, and has been instrumental in the creation of some of Toronto’s most well-known startups. Corey Gross won the internal DMZ alumni award, said that without the DMZ, it’s difficult to imagine Sensibill existing as it does today.

“Without the DMZ, I don’t have a co-founder,” Gross said. “I found someone to go on this journey with, and that’s all from this ecosystem they’ve cultivated. From the very beginning, the DMZ was responsible for kicking off this company,” he added.

The responsibility of executive director since Fox left the DMZ in July is now with Abdullah Snobar, who has been in the role for only ten months, but is still looking to continue the projection of growth the DMZ has experienced.

“We’ve built out an advisory council that we’re onboarding in a few months. It’s going to be the who’s who of the country, I can promise you that,” said Snobar.

“We’re excited about our global and international partnerships that we’re doing, putting Canada on that global map. We’re working in Latin America, the Middle East, Northern Africa, South Africa, and all over Europe. That’s what we hope to continue doing this next year,” he added.

For Mohamed Lachemi, whose role as President of Ryerson University puts him in a visionary position at the DMZ, has a clear goal for the next few years at the DMZ.

“In the short term, the goal is to continue the momentum. We’ve had six years of phenomenal growth, the long term goal is to become the best incubator in the world. That’s not too long term, it’s something we’re going to work hard to achieve in the next few years,” Lachemi said.