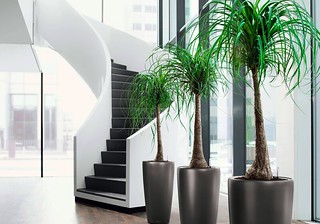 New research out of the United Kingdom has given botanophiles everywhere reason to celebrate.

The Telegraph reports that researchers from Cardiff and Exeter Universities in the UK have concluded that enriching an office environment with plants can increase workplace satisfaction, self-reported levels of focus, and perceived air quality.

The lead researchers went on to claim that overall productivity increased by a startling 15% when plants and photos of plants were introduced to an office space. The results of the plant productivity experiment has since been published in the Journal of Experimental Psychology.

Although this was the first conclusive research of its kind to purport a measured increase in productivity, the benefits of plants in the office is not a new idea. As the Financial Times (FT) reported last year, office greenery can reduce levels of airborne dust, air temperatures, and background noise. FT also included a description of the first round of experiments run by Psychologist Craig Knight of Cardiff University and Alexander Haslam of Exeter University which was performed in the UK and the Netherlands. The experiment involved the measuring of productivity levels of 112 office workers. At the first level the workers performed tasks in a “minimalist environment”, at the second level the office was enriched by potted plants and pictures of greenery, and at the third level the pictures and plants were removed from the office. Within these three different work environments office workers carried out remedial tasks like filing and sorting.

As Jonathan Kaplan states in a Psychology Today article titled, “Plants Make You Feel Better,” increases in productivity mostly stem from the perception of improved well-being in addition to the calming effect that plants and greenery naturally have on humans. He goes on to state that schools, workplaces, and hospitals have found that plants can lower blood pressure, improve reaction times and attentiveness, and lower levels of anxiety. In fact, he draws attention to a study out of the University of Michigan that suggests that even posters of serene settings can help reduce anger and stress among men.

Contribute to Science: Run Your Own Plant Productivity Experiment

Although the benefits that plants have on humans are well-documented, definitive evidence proving a direct correlation between plants and improved productivity is still lacking. But not to fear, there is a way to test the hypothesis within your own office environment. Simply pick up a potted plant from a local grocery store and gift it to a co-worker along with a portion of an assignment that you are struggling to complete on time.  It’s a win-win, and affter all, its in the name of science.