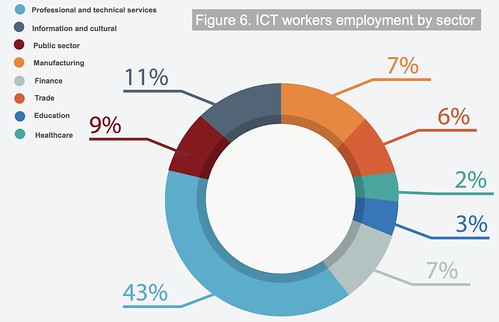 The digital transformation will have an impact on the Canadian economy and employment landscape in the coming years, according to the first-ever national digital talent strategy released today by the Information and Communications Technology Council.

The strategy highlights the opportunity available to Canada in the rapidly changing global economic landscape but urges “fast and meaningful action” to position Canada for success.

“Canada’s standing in the global economy will depend on its ability to fully leverage emerging digital trends. ‘Digital Talent: Road to 2020 and Beyond’ is an action based strategy to better position Canada’s digital talent as a comparative advantage in an increasingly global and competitive landscape,” said Namir Anani, President and CEO of ICTC.

Growth in digital jobs has outpaced those in the overall economy in the last two years by a ratio of more than 4 to 1, with ICT sector employing around 655,000 presently.

The global market for information and communications technology in 2015 is estimated to have reached $3.8 trillion (U.S.), with nearly all new investment focused on so-called “third platform” technologies that link together mobile devices, social media, applications, analytics and the cloud. The ICTC strategy indicates that the impact of smart and connected technologies in the Internet of Things (IoT) will reshape all industrial sectors, including manufacturing, financial services, health, transportation, essential services, media and creative industries. Research suggests that the size of the global IoT economy is expected to exceed $19 trillion (U.S.) by 2020.

“The softness in the Canadian economy precipitated by low commodity prices has highlighted the urgent need to diversify our economy.  Preparing and harnessing the full potential of Canada’s innovative talent to create the industries of the future has never been more critical for the Canadian economy,” Anani said.

With support from Microsoft Canada, ICTC developed the National Digital Talent Strategy in consultation with a wide range of industry, academic and policy leaders from across Canada.

The following are among the strategy’s key recommendations for securing Canada’s future in a global, digital economy:

“Canada’s technology industry has a critically important role to play in ensuring that this country is able to reach its full potential as a global leader in the digital economy,” said Janet Kennedy, President of Microsoft Canada, industry sponsor of the ICTC strategy.

The Information and Communications Technology Council (ICTC) is a not-for-profit national centre of expertise for the digital economy.