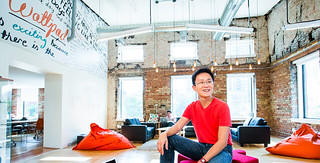 Diversity isn’t just the key to the growth of reading and writing startup Wattpad, according to CEO Allen Lau, it’s also the key to keeping the startup’s growing number of employees happy.

Lau is one the finalists for Entrepreneur of the Year in the Canadian Startup awards, while Wattpad, the company he co-founded, is a finalist for employer of the year.

“2014 was a big big growth year for us,” Lau says. The self-publishing and social reading platform now has close to 40 million users and Lau says it’s adding “more than 100,000 new users every day.”

The company’s employee headcount has also grown, almost doubling in size from 60 to almost 100 people.

“Reading and writing is part of human nature,” Lau says. In order for his startup to be successful  he says “it has to be very global and international,” in different languages and taking account of “different cultural nuances.”

It’s something that Lau cultivates in his staff as well, he says many of the employees are multilingual

“To do a business like this, the most important thing is the people behind it,” he says. Part of it is “hiring the right people” he says but where they work is also important.

“The office is a very creative environment,” he says. “We want the office to be a place that can inspire creativity.”

Book covers and quotes from classic books are posted, particularly in the office kitchen, Lau says, a little reminder in the beginning of the day of why they’re doing what they do.

“We want to building a community to connect readers and writers,” Lau says. “There should not be a disjoint between the company culture and the community.”

That community is at the core of what Lau is trying to do.

That was what motivated the creation of Wattpad, a platform for reading “that caters to modern habits.”

Writers are also changing their habits, Lau says, writing serially chapter-by-chapter for readers who are consuming their work the same way.

Wattpad also has made writing on mobile a priority, while Lau says people aren’t necessarily writing novels on their smartphones.

“Sometimes a new idea comes to mind and they can’t wait to get home,” he says of writers using the platform so it’s important to have a “great writing experience on mobile.”

Growth isn’t the only change for Wattpad in 2014, it’s also the year that Lau started monetizing the platform he started in 2006.

Lau’s strategy has been to use native advertising.

“We work with consumer brands,” he says and “help them to create what we call ‘brand stories.’”

The company recently worked with 20th Century Fox to promote the film The Fault In Our Stars, commissioning stories on the same theme.

“The result was exceptional,” he says.

While Lau admits he might have been a little too early with Wattpad, “at this time, I’d rather be early than late.”